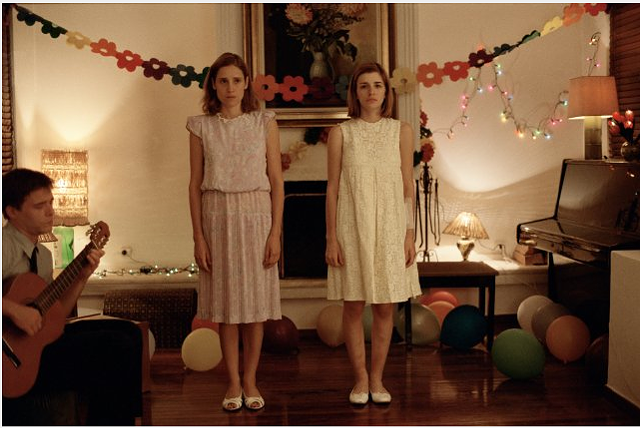 This week in movies you missed: I watch "the weirdest feature film ever to make an Oscar shortlist," according to Steve Pond of the Wrap.

We are somewhere in Greece, in a house with a garden surrounded by a high wall.

Three teenagers listen to a tape introducing them to new vocabulary words. The tape gives glaringly incorrect definitions. The kids, a boy (Hristos Passalis) and two girls (Aggeliki Papoulia and Mary Tsoni), aren't fazed. They plan a new game: They'll see who can keep his or her finger under burning hot water the longest.

Dad (Christos Stergioglou) returns home from work, bringing a young woman named Christina (Anna Kalaitzidou). She goes into the boy's room and has mechanical sex with him, then leaves. The two sisters greet her as one might greet a cleaning woman.

The non sequiturs continue. The brother (none of these characters have names) speaks to someone invisible through the hedge. A plane buzzes overhead, and Mom (Michele Valley) encourages the kids to run and catch it if it falls. A wandering cat in the yard inspires bloodcurdling terror.

The more the film progresses, the more it becomes clear that the rules of this family are not our rules. The parents know this — it's by design. The kids, raised in isolation, do not. By the end, the teens' struggle to achieve independence — and their parents'  countermeasures — will have led to genuinely disturbing transgressions against everything most of us consider "natural" and "right."

This film from cowriter-director Giorgos Lanthimos won Cannes' Un Certain Regard prize in 2010 and was nominated for a Best Foreign Film Oscar the following year, despite reportedly having had a disastrous screening for the committee. It lost that contest to Susanne Bier's In a Better World, but is often credited with revitalizing Greek cinema.

Dogtooth reached just five U.S. theaters and is now widely available, including on Netflix Instant and Amazon Prime. Word is it will expire on Netflix on July 24.

I put off watching Dogtooth until the last possible minute (see above). For a stupid reason: The film's Oscar clip featured the demise of the aforementioned feline, and I'm the kind of person this site was made for. (Hundreds of extras being mowed down by bullets? Eh, action-movie business as usual. One household pet suffering a nasty fate? I cringe.)

For the record, I found the "cat scene" brief and bearable. Certain other scenes in Dogtooth were far, far, far more cringe making for various reasons it would be wrong to reveal.

But let's use the rubric: 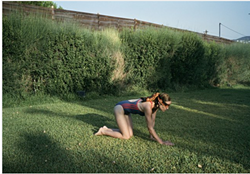 1-4 points: Does it look pretty?
4/4. "Pretty" is the wrong word, but Lanthimos makes artful use of long takes and tight framing — for instance, he might show us an actress' forearm when other parts of her body are doing things we're quite curious about. He finds skillful ways to exploit the small compound in which all the action takes place, so we sense both how claustrophobic this existence is and how terrifying it is for the kids just to step outside. (They stay dutifully on their side of the fence, even when it opens to admit their father's car.)

1-4 points: Does anything happen?
3/4. From the characters' point of view, quite a lot. The film starts slow so as to ease us into their mindset and value system, so that we feel the impact of their eventual subversions on two levels — theirs and ours.

1-4 points: Does what happens make sense?
3/4. Probably? If you're looking for backstory or exposition, Lanthimos provides zero. The only clue to the motives of the parents in miseducating their children comes in a scene where a dog trainer explains the principles of his trade. "Do you want a dog," he asks, "or do you want a friend?" We can deduce that the children's father wanted his offspring to be the human equivalent of a well-trained pooch, which is chilling in itself.

As for what we see of the children's "training," it seems to have been very well thought out. But some aspects remain absurd and/or mysterious. We are no more privy to the "trainers'" real motives than the trainees are.

1-4 points: Do the characters seem like real people? Failing that, do they look pretty?
4/4. There's something odd and stilted about the children that I find completely believable. Essentially they've been raised in a cult (or what the outside world would term a cult) and don't know it.

Also believable: the aggressions and rebellions that surface despite the training, because these are teenagers. The two younger kids remain a bit cipherlike, but Papoulia's performance as Eldest (as her parents call her!) leaves a strong impact by the end. 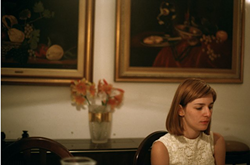 1-4 points: Does the movie give us a reason to care about anything happening on screen?
3/4. Some viewers may see Dogtooth as shock for shock value's sake. After all, how relevant is this bizarre situation to any given real-life family? Similar and worse things have happened in real life, but really, how common are they?

I think it's a fascinating film that makes us ask how and why we know the things we think we know. Where did we learn what a "zombie" was? (When Son hears the word from Christina, he asks his mom. She tells him a zombie is a small, yellow flower.) How much did we learn from our parents and caregivers, how much from the surrounding culture, the internet, etc.? Did we accidentally pick up principles and beliefs that don't serve us well in our lives? Is every family and every subculture just a tiny bit like a cult unto itself? Discuss!

Verdict: 17/20. Dogtooth is the film that M. Night Shyamalan's The Village probably should have been. It has similar themes of protection and control, and it's much more successful at unnerving us on a deep level. I gather there's another, older film with a similar setup, but haven't seen it.

Watch it before it expires, if you dare.

Begin Again, the Once director's musical followup with bigger stars, at the Roxy and Savoy.

At the Roxy, Dinesh D'Souza's doc America. At the Savoy, Life Itself, a crowdfunded doc about the late Roger Ebert.

Most other places: Cameron Diaz and Jason Segel try to keep their Sex Tape from going viral; it's time for Anarchy in the sequel to The Purge; the animated hit Planes spawns a sequel about Fire and Rescue.

And if you get a chance, check out the amazing Snowpiercer before it leaves the Savoy.

This Week in Your Living Room
Hank and Asha, Rio 2, Under the Skin