This week in movies you missed: Last weekend, I shuddered my way through the tense thriller Sicario (review here). Two years ago, I was a fan of Prisoners, by the same director from Québec — Denis Villeneuve.

Between those two movies, Villeneuve made a very Canadian art film called Enemy, shot in Toronto and starring Jake Gyllenhaal. I watched it for free via Amazon Prime (where it's also available for rental), wondering how different it would be from The Double, another art film on a similar theme that hit the U.S. around the same time. (It was the subject of a previous Movies You Missed.) For extra confusion, Enemy is loosely based on José Saramago's novel The Double, the other movie on Dostoyevsky's classic of the same name.

And, of course, Enemy poses the question: Are two Jakes better than one? 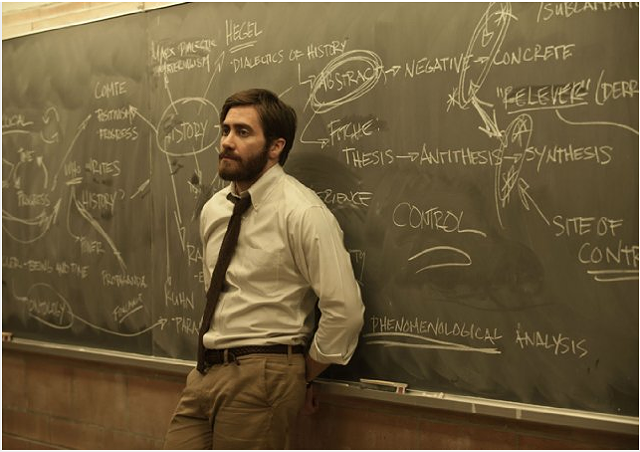 Nothing seems to make Adam happy or engaged with life, until a colleague suggests he watch a cheesy movie. On the screen, Adam spies a bit player (a bell hop) who looks exactly like him. Intrigued, he follows clues until he meets his physical double, Anthony (yeah, also Gyllenhaal), who lives in a much swankier apartment than Adam's with a gorgeous pregnant wife (Sarah Gadon) who looks weirdly similar to Mary.

From here, the film follows the perspectives of both Adam and Anthony, and things get confusing. Very confusing, because they even have the same facial hair. Did I mention that spiders start popping up in odd places, including a surreal shot where an arachnid looms over the sickly, yellow-tinged city? Yup, something's up with those spiders.

Why You Missed It
Enemy never reached Vermont to my knowledge. It played in 120 U.S. theaters and won several of Canada's Genie Awards.

1-4 points: Does it look pretty?
4/4. You can always count on Villeneuve for arresting images — stark silhouettes, shadow play, shots that artfully reveal and conceal. Working here with DP Nicolas Bolduc (not the great Roger Deakins, who shot his more mainstream films), he turns Toronto's modern skyscrapers into a landscape of dread-soaked, vertiginous dreams. Cronenberg comes to mind, but the look is less sterile and more expressionist.

1-4 points: Does anything happen?
2/4. Reviewing The Double, I wrote, "This is one of those slower art films where the atmosphere outweighs the plot and dialogue." The exact same assessment applies to Enemy.

1-4 points: Does what happens make sense?
3/4. As dream logic, with a certain psychological truth? More or less. But clearer characterization would have aided in establishing that logic. 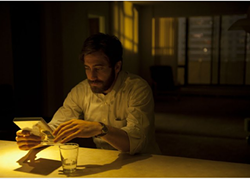 1-4 points: Do the characters seem like real people? Failing that, do they look pretty?
2/4. The big difference between The Double and Enemy rests in the nature of the double. In the former film, meek Jesse Eisenberg meets his polar opposite — an aggressive sociopath — who happens to look just like him. We immediately recognize the double as an id figure.

It's all more vague in Enemy. Anthony certainly lives larger and more aggressively than Adam — he rides a motorcycle, loudly expresses his preference for organic blueberries and becomes Mary's stalker — but an ant or a field mouse lives more aggressively than Adam. What I'm saying is, Adam is barely a character. He's depressed, and that's all we know about him. (As for Mary, she's even less of a character, if such a thing is possible — a waste of Laurent's talents.) 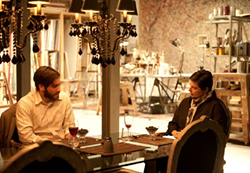 I had mixed feelings about this choice to depict the doubles as starting fairly similar and progressively bleeding into each other. On the one hand, it reduces the dramatic tension between them, and the opportunities for Gyllenhaal to show his range.

On the other hand, it increases the creep-and-dread factor, as we gradually realize that we can no longer tell Adam apart from Anthony, and that the difference may not even matter. It's not so much Adam who's being messed with here as the viewer.

1-4 points: Does the movie give us a reason to care about anything happening on screen?
3/4. My lack of involvement with the characters was a serious problem at first, but as the film progressed, the nightmarish atmosphere infected me. I started out thinking that Anthony represented Adam's fantasy self, then began wondering if it was just the opposite — a reversal that poses all sorts of disquieting questions, given what a sad sack Adam is. Perhaps he's only lifeless and pathetic because he exists as a repository for Anthony's fears about getting caught by the feminine spider who wants to trap him in domesticity? Yikes.

The movie opens with a pompous epigraph: "Chaos is nothing but order yet undeciphered." That order remains mostly undeciphered by me — and perhaps by Villeneuve himself, if a rather giggly conversation between him and Gyllenhaal, packaged with the film on Amazon, is any indication. (Dude really likes to use the word "vertiginous.") Yet Enemy does leave us with a distinct unsettling sensation.

Verdict: 14/20. Given my tastes for conventional narrative and characterization, I prefer Villeneuve in mainstream mode, but Enemy is a disturbing vision worth checking out. Make it a double feature with The Double for extra fun!