Movies You Missed: The Duke of Burgundy | Live Culture

Movies You Missed: The Duke of Burgundy

This week in movies you missed: This year, two arty lesbian romances garnered boatloads of critical acclaim. One of those movies you'll see at the Oscars — that's Carol. This is the other.

What You Missed
Cynthia (Sidse Babett Knudsen) is an entomologist who studies butterflies and moths all day in an immense, ravishingly elegant villa. Evelyn (Chiara D'Anna) is her maid — or so it appears at first. Then Cynthia "punishes" Evelyn for not hand-washing a pair of her undies properly, and it's clear something else is going on here.

Check out the trailer below. It may lead you to expect an über-kinky art film, but The Duke of Burgundy has zero nudity and is actually weirder, twistier and funnier than the marketing suggests.

Why You Missed It
Released in 10 U.S. theaters, none here. Currently on Netflix and Amazon Instant. 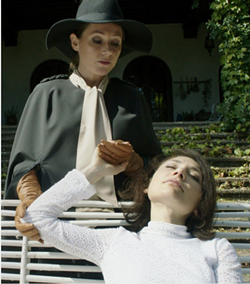 Should You Keep Missing It?
The critics over at the A.V. Club and the Dissolve (RIP) have been touting The Duke of Burgundy to the skies for the past year, with many putting it on best-of lists. In fact, Noel Murray just published a new piece arguing that the film's score was worthy of an Oscar nomination. (I agree.) Meanwhile, the general public and the Academy completely ignored it.

I can't say even I was eager to run and stream The Duke of Burgundy. While I enjoyed director Peter Strickland's previous film, Berberian Sound Studio (and reviewed it in MYM), it was a little too film-studies-insidery for a philistine like myself.

I knew Duke would be another arty, knowing pastiche of old movies I haven't seen. I finally watched it mainly because this is the time of year when I need to see stuff on screen that evokes summer, just to avoid expiring of winter blahs.

First I tried Angelina Jolie's directorial effort By the Sea, filmed in Malta, which was attractively summery but mind-bendingly boring. Then I tried this.

1-4 points: Does it look pretty?
4/4. Day-um, yes. From the first frame, the movie creates its own magical world of intricate composition, costuming and production design.

With an early 1970s look to the makeup and hairstyles, The Duke of Burgundy suggests an old soft-core film made by someone who's even more obsessed with moths than Guillermo del Toro was in Crimson Peak. It appears to take place in a world where men don't exist and impeccably dressed women spend all their time studying insects. (The only scenes outside the villa's grounds are scholarly gatherings at a museum-library.)

It's standard for porn/erotica to take place in a trancey, hermetic world where rules of everyday life don't apply, but Strickland takes that principle to creative extremes — at least on the visual level.

Then there's the aural level. Strickland's use of bizarre insect shrieks and buzzes on the soundtrack reminded me of David Lynch. They go well with the soundtrack, which verges from borderline-saccharine to creepy and dissonant (read Murray's piece for details and samples).

1-4 points: Does anything happen?
3/4. And this is the surprise. Yes, this is an art film, and if the sights and sounds of its world don't hypnotize you, you may get testy. But there's far more dramatic meat to The Duke of Burgundy than there was to, say, Fifty Shades of Grey. You don't have to be titillated to be interested.

1-4 points: Does what happens make sense?
4/4. Despite the unreality of their world, Evelyn and Cynthia have a believable relationship; you don't have to be into B&D to relate to their conflicts and clashes. For me, this core of psychological believability is what lifts Duke out of the category of "pretty pastiche."

1-4 points: Do the characters seem like real people? Failing that, do they look pretty?
4/4. Real and pretty. This is the sort of film in which directors too often cast inexpressive model-actress types. Going for the less sanitized look of the '70s, Strickland cast actual actors with distinctive faces (and imperfections). Knudsen plays the prime minister on the Danish show "Borgen," and she brings dramatic weight to Cynthia's weariness with the S&M game.

1-4 points: Does the movie give us a reason to care about anything happening on screen?
3/4. By the end, the repeated motifs were starting to tire me a little, but, overall, Strickland did make me care about this bizarre scenario. Also, he made me laugh, something I didn't expect. This is a film with an ultra-straight-faced discussion of a "human toilet."

Verdict: 18/20.
Avoid it if you can't tolerate B&D motifs or gratuitous artiness, or if you're hoping for graphic sex scenes. (Everything in Duke is a tease; the naughtiest scene is one we hear while the camera stays on a closed bathroom door.)

See it if you're attracted to a film whose end credits include a long list of "featured Insects" and an assurance that "no insects or mammals were harmed" in its making. Clearly the work of an obsessive with a playful sense of humor, Duke is too weird for the Oscars — in a good way.