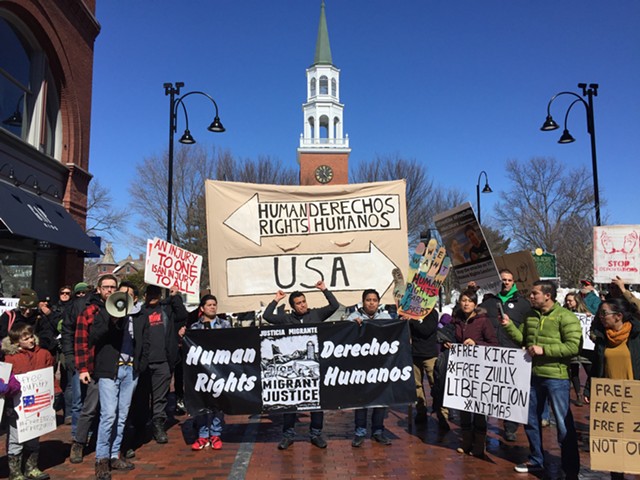 The detention of three immigrant advocates last week points to a systematic targeting of Migrant Justice workers, according to their immigration attorney.

Matt Cameron, a Boston-based immigration attorney, has agreed to represent Cesar Alex Carrillo, Enrique Balcazar and Zully Palacios pro bono. He called the arrests a "clear, simple case of retaliation" and painted a picture of a vindictive, overreaching Immigration and Customs Enforcement agency in Vermont.

"There's nowhere else where they would surveil people like [them]," Cameron said in a phone interview with Seven Days on Tuesday.

He called the Vermont office "over-resourced" and contended that the three most recent arrests, coupled with the arrests of Victor Diaz and Miguel Alcudia last year, point to a broader trend. "Why are we wasting resources on thoroughly decent people like Zully and Enrique who are doing really important work for their communities?" he said.

Balcazar and Palacios were arrested during a traffic stop in Burlington on Friday afternoon. In a statement released over the weekend, ICE said that Palacios had overstayed her visa by nearly a year and that Balcazar was "in violation of U.S. immigration laws."

Carrillo was on his way to a court hearing on Wednesday when he was arrested. According to an emailed ICE statement, he "claims to have unlawfully entered the United States in 2010." ICE officials have not responded to multiple requests for further comment.
The detainees, who are being held in a detention facility in Dover, N.H., will eventually see a Boston judge for bail hearings. Court dates have not yet been scheduled, though Cameron said the trio are entitled to a hearing within 10 days of being arrested.

Palacios is currently held without bail. Carrillo is held on $21,000 and Balcazar is being held on $14,000 bail. "That's what you'd expect for a serious criminal," Cameron said.

The deportation proceedings that follow could take years, Cameron said.

Following that incident, Cameron gave Balcazar his contact information in case of an emergency.

Cameron alleges that ICE agents violated Palacios' rights during her arrest. They sat her down and gave her an ultimatum, according to Cameron: sign a voluntary departure form to be deported or be held without bail for two months without seeing a judge.

Cameron called the practice "outrageous," adding that Palacios knew her rights and refused to sign the form agreeing to deportation. Still, "that's a violation of your fundamental rights, not only to counsel, but you also have a fundamental right to know the forms you sign," he said.

Since the arrests, Cameron said, the American Civil Liberties Union and immigrant advocacy groups nationwide have voiced their support for those arrested.

"Allies here in Boston are prepared to mobilize," he said. "They want to send a message to ICE — You can't just go after them for their speech, for organization, for activism."