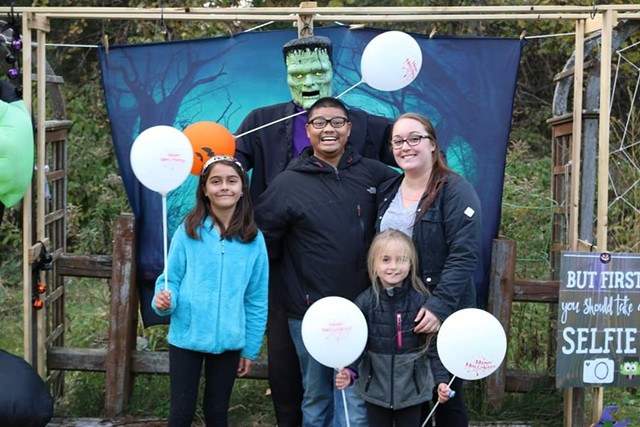 Thao Vo was riding to the bank on his motorcycle last August when a man driving a black Dodge Durango pulled him over. A federal agent got out of the SUV and told Vo he was being detained and taken to a federal immigration facility in St. Albans.

It was the beginning of six months behind bars for Vo, a Vietnamese citizen who has lived legally in the U.S. with a green card since 1999, when he was 6. He got out in March on supervised release. But officials have since told him that he must wear a GPS tracking device until he's deported to Vietnam in February because of a 2016 conviction for marijuana possession.

Along with his fiancée, Desiree Mora, and close friends, Vo is trying to raise money and publicity to fight the government’s decision.

“My whole immediate family is over here. Everybody,” Vo said in an interview. “I’ve been here for 20 years. I’ve made my mistakes, but I’ve never blamed anybody for my mistakes.”

Vo said he has two criminal pot convictions. He said he was convicted of a felony in Illinois in 2013 after he and a friend were caught in a vehicle with six pounds of pot (he said a federal judge opted not to deport him for that offense), and a misdemeanor in Vermont in 2016 for possessing between one and two ounces. He said he spent 22 months in prison in Illinois and paid fees, as well as a $600 fine for the Vermont conviction.

Seven Days was unable to review Illinois court records but did examine documents in Chittenden County Superior Court that show Vo was arrested twice in 2012: once in connection to an assault and robbery in Burlington and once for driving under the influence; prosecutors later dropped all of those charges. Vo said he was wrongly charged with DUI in 2016 after someone else falsely claimed to be him during a traffic stop. That charge, too, was dropped.

In an emailed statement, U.S. Immigration and Customs Enforcement spokesperson John Mohan confirmed Vo's immigration status and timeline of events. But he refused to say exactly when Vo will be deported. The order stems from a "violation of the terms of his admission due to a criminal conviction," Mohan wrote.

Vo currently lives in Winooski as a stay-at-home caretaker for his fiancée’s two children, and says he’s turned his life around.

Part of his stability, Vo said, comes from a job he got working for Melissa Gonyon at Gadue’s Dry Cleaning, soon after his return from Illinois. He said his first application didn’t land him a job, but Gonyon called him in to work a few days later when an employee walked out.

“She gave me this opportunity to clean shoes at her company, and I worked my way up,” Vo said.

Gonyon said in an interview that she trusts Vo completely.

“Here’s a hardworking kid who’s made a few stupid mistakes and he’s trying really hard to fix it," Gonyon said.

“I had to have 100 percent trust in him because I’m sending him as a representative of our company into people’s homes, and in most cases it’s nobody but us,” she said.

Vo can't work now because of the ongoing immigration proceedings, but Gonyon is holding his job for him. She also launched a GoFundMe campaign to raise money for his legal expenses.

“I don’t think it’s right. He doesn’t deserve to go back to Vietnam and have everything ripped away from him for a couple of marijuana charges," she said.

Gonyon, who describes herself as a "die-hard Republican," said she's written to Sen. Bernie Sanders (I-Vt.) about Vo's case.

“It’s definitely a weird feeling for me to be fighting for a cause that is so very liberal, but I’m doing it because I’m doing it for Thao,” she said, noting that she sees his case differently from the thousands of undocumented immigrants living in the country illegally.

The fundraising page shows photos of Vo with Mora and her two daughters, ages 6 and 10.

“They call me Pops, and when I go to school, they introduce me as Pops," Vo said of the girls. "I’ve just been here.”

Gonyon said Vo's support at home is vital to Mora and her daughters.

“He provides her with that stability of, ‘I know where my kids are, I know who’s picking them up, I know who’s dropping them off. Supper’s on the table,’” Gonyon said.

Vo's green card allowed him to legally live and work in the U.S., but doesn't guarantee the rights of citizenship. He said he never applied for citizenship out of fear that he would fail the test due to reading and writing difficulties.

Related For Noncitizen Immigrants, Marijuana Legalization Does Not Apply

For Noncitizen Immigrants, Marijuana Legalization Does Not Apply
By Kymelya Sari
Crime
Vo speaks very little Vietnamese and hasn't been back to his home country since he and his family left nearly 20 years ago.

Vo is hoping a new lawyer can get a judge to overturn his 2016 conviction. The 25-year-old said that his attorney failed to inform him that accepting the plea deal could get him deported.

“I knew that I’m an immigrant, I’m a green card holder, I stressed it multiple times,” Vo said of the 2016 case. “I clearly said it then, before I signed [the deal], 'Is this going to reflect on my immigration status?’ and [my lawyer] said ‘No.’”

But a letter Vo received from the U.S. Department of Homeland Security said otherwise: He is being deported for that conviction, which involved possession of more than 30 grams of weed.

He said he didn't realize the implications of the conviction until he was detained by the feds last fall.

“I just [felt] like everybody’s smoking marijuana, what’s the big deal?” Vo said. “But the big deal is that it affects my immigration.”
Prev
Next