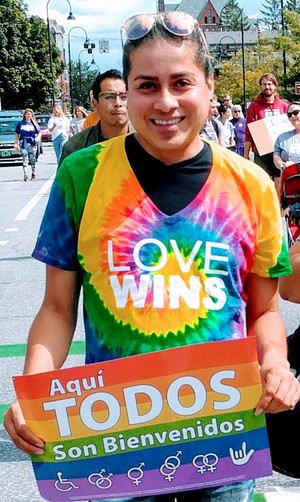 A 32-year-old Vermont farmworker and Migrant Justice activist died of COVID-19 in Mexico last week after being deported in March, the group said Tuesday.

Durvi Martinez, a trans woman who used they/them pronouns, "was a brave and outspoken advocate for immigrant and LGBTQ rights," the organization said in a statement Tuesday announcing their July 1 death. "Durvi will be remembered as a loving and supportive friend."

Martinez is believed to have contracted the new coronavirus in Mexico, but Migrant Justice said it holds U.S. Immigration and Customs Enforcement responsible for their "unjust" detention, deportation and death.

"Rather than releasing Durvi, ICE deported them to their death," the group said.

Martinez's deportation proceedings began shortly after Vermont State Police arrested them for DUI near Albany on January 12. A deportation officer "was notified" of the arrest and took Martinez into custody, according to an affidavit filed in U.S. District Court. It's unclear how the officer learned of Martinez's arrest.

While awaiting deportation, Martinez took steps toward applying for political asylum on the basis of the "horrific and systemic violence that they experienced as a trans person in Mexico." Martinez had requested a "credible fear interview" but had not filed a formal application when ICE deported them sometime between March 20 and March 23, Lambek said.

Migrant Justice said ICE "ignored" Martinez's asylum claim and did not notify their lawyer of the deportation.

By the time Martinez was deported, human rights groups were already calling on the Trump administration to release ICE detainees and stop deportations to prevent the virus' spread. The first ICE detainee tested positive for coronavirus on March 24 in New Jersey.

ICE did not respond to a request for comment.

Lambek said Martinez was a frequent participant in Migrant Justice protests and events, including marches to press for the release of other detained farmworkers.

Migrant Justice is raising money for Martinez's family to offset hospital bills and funeral costs. A GoFundMe campaign had raised more than $8,000 in about five hours on Tuesday.
Prev
Next