The Burlington City Council on Monday night voted to adopt a policy that will bar local police from collaborating with federal immigration agents.

The council voted 11 to 1 to approve a new Fair and Impartial Policing Policy, with outgoing City Council President Kurt Wright (R-Ward 4) casting the lone no vote.

The sizable crowd erupted in cheers as soon as the vote total was announced.

“Vermont will fight for immigrant rights!” they chanted.

The elation was in stark contrast with the tense atmosphere that dominated most of the hourlong discussion. When a member of the crowd applauded or spoke out of turn, Wright threatened to delay action on the item, which drew a large, passionate crowd at two consecutive city council meetings.

The council president's attempts to restore decorum were met with boos and jeers. When someone interrupted Councilor Chip Mason (D-Ward 5)'s statement, Wright urged them to listen to differing points of view. "Well fuck you, too!" the person yelled in response.

After the vote, a Channel 17 livestream of the meeting recorded Wright discussing his thoughts on the vote.

"Nothing but a bunch of pandering city councilors," Wright continued. "Just pandered to them. Disgraceful."

While the former policy said Burlington police won’t “routinely” ask subjects about their immigration status, the new version explicitly bans the practice unless it’s “necessary to the ongoing investigation of a criminal offense for which there is probable cause.”

The policy also says that Queen City cops have no role in enforcing federal immigration law and orders them to not call the feds if someone calls police with a tip about a person’s immigration status. The policy says relying on federal agencies for interpretation services should be a last resort. 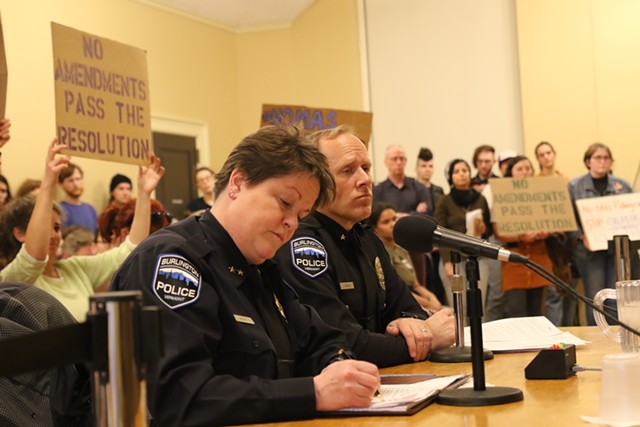 Interim Burlington Police Chief Jennifer Morrison urged councilors to send the draft to the police commission for further vetting, as is customary for police policy changes. She warned councilors that the policy is at odds with federal law, which could put the city at risk to lose more than $625,000 in federal grants.

Morrison called the policy “a solution in search of a problem” since Burlington cops “have never acted as deputies for federal immigration officials, and we never will.”

“The precedent of the city council taking a policy written by a special interest group and adopting it, unilaterally, without vetting, is unconscionable,” Morrison continued. “If this is the way the council is going to determine policy for the police department, I fully expect to see policies proposed by other special interest groups."

“I cannot imagine a monetary value that could be enough to convince me not to support this policy,” Freeman said, adding, “How do you itemize the value of someone’s life?”

“What’s the point of having money for public safety if you’re not keeping the public safe?” Hanson echoed.

Several Spanish-speakers took the mic to explain why the policy change is needed.

“I’m afraid when I come here because I know that Burlington does not have a policy which protects my rights, which ensures that Burlington police will not call immigration,” Olga Cruz said through interpreter Will Lambek of Migrant Justice. “We want this policy to be strengthened everywhere, and tonight, it’s Burlington's turn.”

Others challenged the councilors to approve the policy since many of them supported designating Burlington as a sanctuary city in 2016.

"That means absolutely nothing if we don't have the policies to back that up,” Maria Castine said. “We don't get to label Burlington a liberal safe haven if we don't have anything on paper."

In the end, the majority of councilors heeded the call for action. Councilor Sharon Bushor (I-Ward 1) said that while she heard Morrison’s concerns, she’d been horrified by the national news coverage of the immigration crisis.

“I feel that the times just mandate that I do something more radical than I normally do,” Bushor said. “I do think that there could be some repercussions, but I think ... that we need to try to be on the right side of the law and try to make that law change."

Watch the full video of the meeting below, courtesy of Channel 17:


Editor's note, February 11, 2020: The commenting feature has been turned off on this story because many of the remarks violated our policy, which states that commenters must be civil, on topic and respectful of each other. Commenters who violate these rules risk having their account  on sevendaysvt.com suspended.