Immigration and Customs Enforcement will cease deportation proceedings against three Migrant Justice activists and pay $100,000 to settle a federal lawsuit claiming it had unlawfully targeted the advocacy group's members.

The settlement ends a federal lawsuit filed two years ago that alleged ICE had illegally sought to stifle Migrant Justice's political activism through a campaign of harassment, surveillance, arrests and deportation.

The agreement requires ICE to send a memo to its Vermont employees reiterating that they should not profile, target or discriminate against any individual or group for “exercising First Amendment rights.”

The plaintiffs and their attorneys portrayed the settlement as a major constitutional victory during a demonstration Wednesday outside the U.S. courthouse in Burlington that blocked traffic on Elmwood Avenue for about 45 minutes.

"We want this to be a precedent for all other communities," Victor Diaz, one of the plaintiffs, told the crowd of about 40 people, speaking in Spanish as Migrant Justice spokesperson Will Lambek translated. "So that they know that they can organize and speak out to defend their rights without fear of illegal retaliation from their government."

Lawsuit: Feds Used an Informant to Infiltrate Migrant Justice
By Kymelya Sari
Off Message
ICE denied most of the lawsuit’s claims in court documents and did not admit wrongdoing.  Attempts to reach an agency spokesperson on Wednesday were unsuccessful.

The federal lawsuit accused ICE and the Department of Homeland Security of engaging in an orchestrated effort to destabilize Migrant Justice in retaliation for its outspoken criticism of federal immigration authorities.

More than 40 members of the group — including some of its most prominent leaders — were arrested in the two years before the suit's filing, with the majority getting deported. At least nine people were targeted specifically because of their activism, the lawsuit alleged, citing one example in which ICE agents referred to a man they arrested as "famous" because of his activism, and named another member of the group who would be "next."

Immigration authorities also kept dossiers on Migrant Justice leaders, the group said, documenting their social media pages and media appearances. And ICE enlisted at least one civilian informant to infiltrate Migrant Justice, according to the suit, leading to the arrests of two of the plaintiffs: Enrique Balcazar and Zully Palacios Rodriguez. Neither had a criminal record, the suit said.

The plaintiffs were represented by the ACLU of Vermont, the Center for Constitutional Rights, the National Center for Law and Economic Justice, the National Immigration Law Center, and Gibson, Dunn & Crutcher, a large law firm headquartered in Los Angeles.

"Rights don't mean anything if you can be punished for exercising them," said Leah Lotto, a senior attorney with National Center for Law and Economic Justice. "The First Amendment does not exist in the abstract. It exists here, right now, in the exercise of our rights and our shared work to enforce our right to speak without retaliation." Diaz, Balcazar and Palacios Rodriguez were facing deportation when the suit was filed. As part of the settlement, their proceedings will be deferred for five years, allowing them to remain in the U.S. and obtain work permits.

Balcazar, also addressing the crowd in Spanish, said he viewed the settlement as ICE "admitting defeat" by both "allowing myself and others to remain in the country, and accepting that they cannot target people for speaking out and organizing."

"With this important step, we are demonstrating our power as a united community," he said.

The lawsuit's conclusion comes nine months after the Vermont Department of Motor Vehicles reached a separate settlement with the plaintiffs over its own role in the immigration crackdown. Records showed that DMV employees had willingly handed over information about Vermont residents who applied for state driver's privilege cards — a program created in 2014 to allow undocumented residents to drive legally.

The DMV agreed to policy changes and anti-discrimination training for its employees. It also pledged not to provide information unrelated to immigration status for the purposes of immigration enforcement.

While Wednesday's demonstration was a celebration, not everyone appreciated the disruption.

Toward the end of the event — as Migrant Justice spokesperson Thelma Gómez spoke about how the group's work was far from finished — a man driving a Ford SUV turned onto Elmwood Avenue, stopped a few feet away from the crowd, whipped his door open and leaned out of the vehicle.

"Get out of the way!" he bellowed, holding a large knife in his hand. "You guys are illegally blocking the fucking streets. I live right there. Get the fuck out of the way!"

Slamming his door shut, the incensed driver then inched the SUV forward, despite several demonstrators in his way. Most shimmied to the side of the vehicle and put their hands on his hood, pleading with him to stop. But one protester stood his ground in front of the SUV.

Holding a large banner linked by two wooden posts, the protester assumed the stance of a knight prepared to joust. He lodged his makeshift lance against the SUV's grill and braced himself. 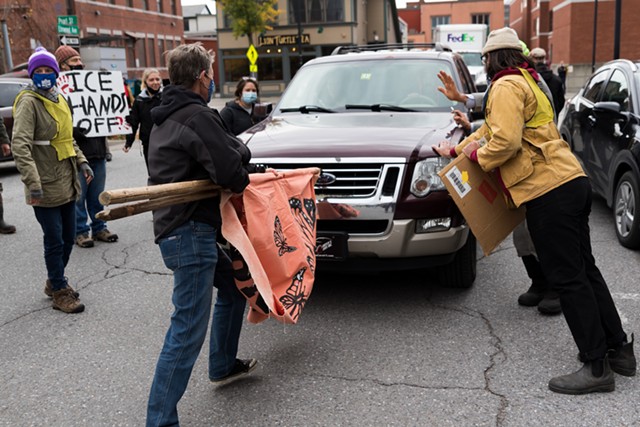 The stalemate lasted a few seconds. Finally, as his fellow demonstrators urged him to move, the protester stepped aside, and the driver sped forward, clearing the crowd as he swerved around a pair of women in middle of the street. Burlington police arrived a few minutes later and stationed a car to block the road. But the demonstration was essentially over.

As the man sped away, Gómez, the spokesperson, resumed her remarks. She then led a chant of  "Sí se puede," and told the uneasy crowd that the confrontation was a clear example of what happens when people "rise up to defend their rights."

"Not everybody's going to like it," she said in Spanish as Lambek interpreted. "But we can't be scared. We can't retreat. We have to continue forward, defending our human rights."
Prev
Next