Updated at 1:00 p.m. on 4/25/2016 with information from Immigration and Customs Enforcement

Immigration and Customs Enforcement agents detained a Mexican farmworker and prominent migrant rights activist in Vermont Thursday, according to a friend who was with him at the time.

Victor Diaz was about to enter Green Goddess Cafe in Stowe for a Mexican food event when two officers in plainclothes asked for his name. After he complied, they apprehended him, said Enrique Balcazar, a fellow organizer also from Mexico.

ICE released a statement late Friday saying that 24-year-old Diaz became an “enforcement priority” after he was convicted for a DUI last November. It described him as a citizen of Mexico and noted that he “will remain in ICE custody pending removal proceedings.”

Balcazar said the agents, who showed badges, did not question him. 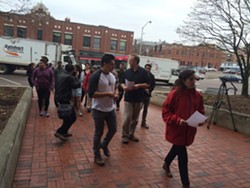 On Friday, members of the group Migrant Justice and other supporters crowded into the foyer of Sen. Patrick Leahy’s Burlington office, demanding that he intervene on Diaz’s behalf.

Originally from Chiapas, Mexico, Diaz has worked in Vermont for roughly six years and is currently employed at a dairy farm in Vergennes. He’s one of approximately 1,500 migrant workers in Vermont.

In 2014, Diaz left his job at a Ferrisburgh farm, decrying what he described as abysmal housing conditions for the workers on site. Accompanied by other Migrant Justice activists, he later returned to the farm to demand back pay from his boss. According to news reports, Diaz and several other ex-workers left that day with their checks.

Since then, he’s continued to advocate for farmworkers’ rights, helping lead the “Milk with Dignity” campaign, which is meant to pressure companies, including Ben & Jerry’s, to require that their supplier farms meet basic labor standards for migrant workers. His photo appeared in a New York Times story highlighting the effort.

Diaz’s case recalls that of Danilo Lopez, a well-known migrant rights activist who was pulled over by Vermont State Police and subsequently detained by ICE in 2011. Lopez successfully fought his deportation, with help from Vermont’s congressional delegation, winning the right to remain in the state in 2013.

Migrant Justice, which has quickly rallied around Diaz, went to Leahy’s office seeking a similar outcome. Leahy’s state director, John Tracy, came out to greet the group. “The senator is clearly concerned about this,” Tracy told them, noting that his boss has been a longtime advocate for immigration reform and “strongly feels that our scarce [enforcement] resources be focused on criminals, not on people who are abiding by the law or raising families.”

Tracy said that a member of Leahy’s staff had already spoken on the phone with Diaz’s lawyer, but Diaz will need to sign a privacy release for Leahy’s office to find out more about his situation. Tracy handed the form to members of Migrant Justice in case they see Diaz.

Marita Canedo, a friend of Diaz’s, spoke to him by phone this morning and said he is being transported from the St. Albans detention center to a facility in New Hampshire today. Canedo said she had not been aware that Diaz had a lawyer until Tracy’s statement.

Friends and fellow activists hailed Diaz as a “human rights leader.” They declined to address his immigration status. “That’s a question we don’t actually focus on,” Balcazar told a reporter.