Movies You Missed: Beyond the Lights | Live Culture

Movies You Missed: Beyond the Lights 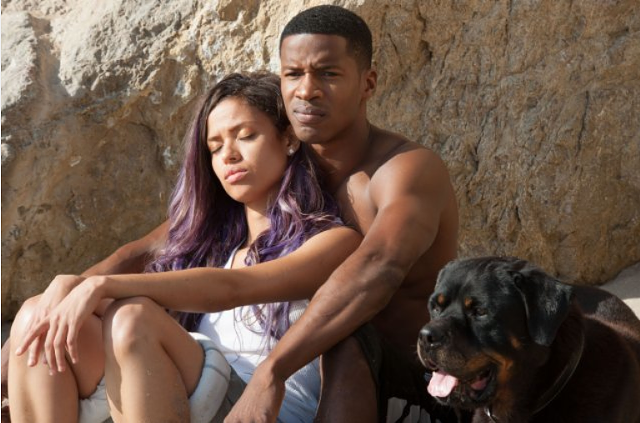 This week in movies you missed: I could describe Beyond the Lights as the second film that made 2014 the Year of Slightly Increased Visibility of Black Female Directors (along with Ava DuVernay's Selma). Or I could just describe it as a surprisingly powerful little film that makes perfect summer viewing for anyone with even the slightest tolerance for romance scored to an r&b beat.

Either way, this show-biz drama from writer-director Gina Prince-Bythewood deserves to be less obscure than it is — at least in Vermont, where it didn't play theatrically.

What You Missed
Noni (Gugu Mbatha-Raw) is a girl from Brixton with a big voice who's living out a fantasy — she's a rising pop star through her professional and personal collaboration with a successful rapper (Machine Gun Kelly).

Yet on the night she wins a Billboard Award, right before her first album drops, Noni can't hold it together. Her momager (Minnie Driver) finds her perched on the balcony of her penthouse suite, ready to jump. Kaz (Nate Parker), the young cop who's running security that night, tries to talk Noni down. "You don't see me," she says. "I see you," he counters — and catches her when she falls.

The execs at the label threaten to kill Noni's album unless she demonstrates to the public that her near-death was just a drunken escapade — because "Suicide isn't sexy." Her "savior" appears beside her at press conferences where he's been paid to repeat the official line.

Meanwhile, Kaz's police captain dad (Danny Glover), who's been grooming his son to be the next Obama, sees this sudden celebrity as an opportunity to get Kaz into citywide political office.

No one's asking Kaz and Noni what they want. But they're gradually discovering they want each other.


Why You Missed It
Beyond the Lights reached about 1,800 theaters — none in Vermont, to my knowledge. Diane Warren's original song "Grateful" received an Oscar nomination. You can currently see the movie on Netflix Instant or rent it for a buck on Amazon.

Should You Keep Missing It?
As I watched Beyond the Lights, I periodically interrogated myself: "This movie could play on Lifetime and not seem out of place. It's like the indie version of The Bodyguard. You don't even like romances. So why are you enjoying it so much?"

Like Once, Beyond the Lights is a music-driven love story that somehow found its way through this anti-romantic's defenses. Let's examine why using my 20-point, highly scientific scale for the evaluation of indie films:

1-4 points: Does it look pretty?
4/4. Oh, yes. Here's one significant difference between Beyond the Lights and a typical Lifetime flick: its arty gloss and moody visual atmospherics. (Many of the nighttime LA scenes are splashed with purple, much like Noni's weave.) Granted, it sometimes looks like a high-quality music video or ad, especially when Noni and Kaz have an idyll in Mexico. But Prince-Bythewood (Love and Basketball) gives the movie an overall dreamy look that matches the soundtrack's rhythms and encourages us to suspend our disbelief in the unlikely romance.

1-4 points: Does anything happen?
4/4. Enough to give Noni's fans and haters plenty to tweet about. This is a show-biz melodrama that hits most of the beats you'd expect, from the opening breakdown to the cathartic final performance.

1-4 points: Does what happens make sense?
2/4. As much as the clichés of show-biz melodramas do. Large parts of the film's screenplay are boilerplate. But it's never offensively dumb boilerplate, and a few scenes rise to the level of insight into the emptiness of modern celebrity. (I liked Noni's dry summary of her relationship with the rapper: "We texted. We hit it. We texted about hitting it.")

1-4 points: Do the characters seem like real people? Failing that, do they look pretty?
4/4. Let me just take a second to acknowledge that Parker and Mbatha-Raw are both very, very pretty people who look pretty together.

But they also have rarer charisma and chemistry — enough to make their characters feel like real people even when the script leans on clichés. Parker has a wry, self-aware quality while also exuding Good Guy vibes; it's easy to see why Noni believes Kaz when he says he sees her. And Mbatha-Raw's gradual revelation of the suffering woman and artist inside the blank-eyed pop sex kitten is thoroughly believable. With any justice, these will be star-making performances for both of them.

1-4 points: Does the movie give us a reason to care about anything happening on screen?
3/4. It's no secret that many of the routes a young woman can take to fame involve exploiting her sexuality, and that this is especially true in the music world. Noni's career exemplifies everything that old farts like me don't like about the annual spectacle of the VMAs.

Beyond the Lights draws us in with the excess and glamour of that culture only to remind us just how dehumanizing it can be. The scenes where Noni (finally) removes the absurd accoutrements of her persona (weave, heels, nails, skin-tight minis) feel liberating, and we watch her become more expressive as that sullen, sexy persona fades away.

It's a message that could have felt obvious and scolding — yet doesn't, because Mbatha-Raw really is more luminous without all the drag. The music-industry scenes feel real enough to convince us that being an over-managed star property actually would be pretty awful, even if the job comes with a mansion in the Hills.

Verdict: 17/20. This is the movie that 2013's Begin Again was trying to be — a dreamy, bittersweet musical romance that leaves us exhilarated and humming. Yet it also touches on deeper issues of gender, race, art and celebrity. I'm excited to see what Prince-Bythewood does next, because the world needs good chick flicks.

Also New on Streaming This Month
Two high points of Beyond the Lights are Noni's two renditions of Nina Simone's "Blackbird." And now I want to watch What Happened, Miss Simone? a documentary about the singer exclusive to Netflix.

The Guest, an '80s throwback thriller I highly recommend, will reach Netflix on July 25. July 31 will bring us a sequel to Wet Hot American Summer, giving me a chance to rewatch the original comedy and try to grasp how it became a cult item. (I mildly enjoyed it, but … )

Here are more titles that start streaming this week.

Movies You Missed Movies you missed Video Web Only