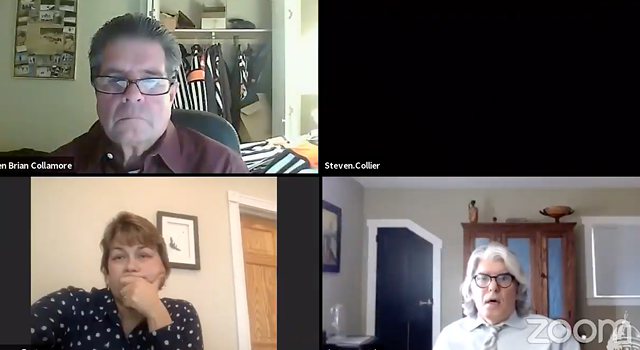 “Oh, my God, it was horrible,” said Sen. Ruth Hardy (D-Addison). “I got off the call as soon as possible because I just didn’t want to see all that awful stuff.”

It’s the first time since the Vermont legislature began holding teleconference and video conference meetings three weeks ago that someone has intentionally hijacked a public meeting.

The practice is happening around the nation as mischief-makers are finding ways to infiltrate calls and upload offensive content. The practice even has a name — Zoombombing, a reference to the increasingly popular Zoom video conferencing platform.

The Senate Agriculture Committee was about 50 minutes into the call when a young man’s voice broke in and said “shut the fuck up” and then used a racial slur. The line went quiet for about 30 seconds, then a person said, “Bitch!”

After a few seconds, Starr told Hardy to continue with a question. She did, and then explicit pornographic images and video appeared on the screen.

“No, don’t turn it off. Stay on,” the interloper teased.

A blank document appeared, and somebody began drawing a crude image of genitals and then the letters "n" and "i."

“Yes, I do,” an unseen youthful voice responded.

Another voice broke in to say the meeting was being recorded and would be put on YouTube.

Hardy said a number of people appeared to jump on the video call, including what looked like a teenage boy, perhaps 16 years old.

“It was some kid. You could see his face,” Hardy said. “There were a bunch of different people. It was crazy.”

One youngster she saw flashed the V-shaped hand gesture from the character Spock on Star Trek, Hardy said.

As lawmakers disconnected from the call, legislative attorney James DesMarais stared at his screen in apparent shock while Alyson Eastman, a deputy secretary of the Agency of Agriculture, Food, and Markets, held her hand over her mouth.

Hardy said the incident was particularly jarring because they had just been talking about the most wholesome possible program — efforts underway to ensure school kids stuck at home are getting access to school lunch programs.

Hardy’s teenage children were home with her at the time of the prank, but she said she was in a separate room with the door closed.

The committee held a quick telephone conference call after the incident and decided to reschedule another Zoom call for Tuesday. It can be hard to reschedule members of the administration for such legislative calls because people are so busy dealing with the myriad impacts of the pandemic in the state.

“It’s really the last thing we need,” Hardy said. “We’re dealing with a worldwide pandemic and now this bullshit.”

Pearson said IT staff had since determined how to set meetings so that only invited people can get access, though the public can continue to view the proceedings on YouTube. He said he didn’t think the incident would set back efforts to allow remote voting by lawmakers.

Pearson said he accidentally released the participant link on Twitter, though he's not sure if that's how the pranksters got on the call.

"I was trying to share the YouTube link," Pearson told Seven Days in a text. "Juggling too much."

Kevin Moore, the state’s IT director, said the incident was under investigation by capitol police. He stressed that the system was not hacked, merely that the confidential information meant for meeting participants was shared in error.

The issue is not isolated to Zoom, but is associated with the company because of how popular the technology is becoming as innumerable organizations switch to remote communications.

“Obviously, we’re not the only organization going through growing pains as we bring an entire branch of government online,” Moore said.
Prev
Next