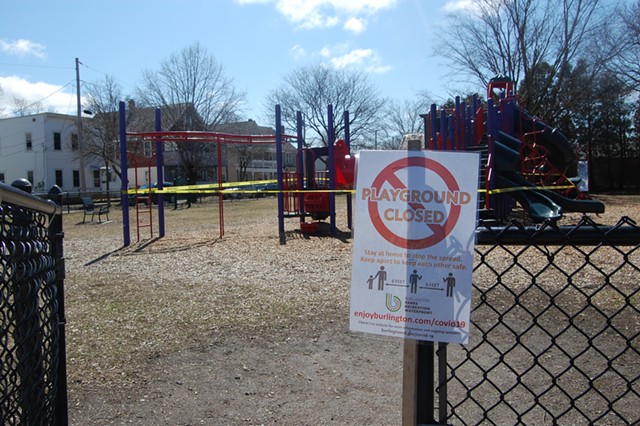 In an effort to discourage group activities and gathering, Burlington will remove basketball hoops and close tennis courts and dog parks on Friday. The city has also closed playground equipment and fitness stations.

Other green spaces are open and available for people to use for exercise in accordance with the governor's stay-at-home order, according to Cindi Wight, the Burlington Parks, Recreation & Waterfront director.

"As a Parks and Rec person, I feel like I pulled an appendage off today," Wight said in announcing the closures during a city press conference on Thursday.

The waterfront bike path remains open, though Wight and other city officials encouraged users to exercise elsewhere because it has become overcrowded, making it impossible at times to maintain a six-foot social distance.

In an effort to alleviate the crowding, Department of Public Works Director Chapin Spencer said Thursday that the city will begin a "shared streets for social distancing" initiative. Some streets will be open only to local traffic. Others will be considered shared streets. The city will implement temporary parking restrictions along some corridors, such as Pine Street, to widen the roadway for walking and biking.

Some changes will be in place by this weekend and all are expected to be in effect by April 11, Spencer said.

"We're doing this to encourage safe and healthy recreation," Spencer said. "And in part because, honestly, the bike path has become crowded at times during this pandemic. While the popularity of the path is a core asset to our community, it has also presented a challenge on nice days during this necessary period of distancing."

While city officials generally applauded Burlingtonians for keeping a safe distance from one another, Interim Burlington Police Chief Jennifer Morrison said that some groups of college-age young adults have consistently disobeyed orders to disperse.

Morrison said her department is working with city attorneys on a local ordinance that would allow officers to issue tickets. They're waiting to hear from the state about an enforcement plan, she said.

"We also expect to hear some clarifying words from the state soon on what to do if even that doesn't work," Morrison said. "There are some cross sections that nothing we say is going to get through to, and we need to be prepared to bring a stick, and we're also working on some carrot options, too.

"We're trying to be creative and find a way to get these folks away from each other so that they're not cross-contaminating households," Morrison continued, "and keeping the community safe."
Prev
Next