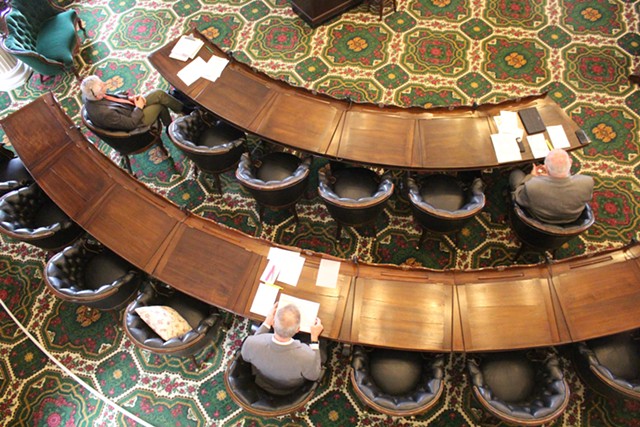 If Gov. Phil Scott wins another term this November, he might find himself giving his 2021 inaugural address in his hometown instead of in the state capital.

A recent study of how lawmakers might return for in-person legislating in January concludes that the Barre Auditorium is the only facility in central Vermont capable of safely hosting all 180 lawmakers at once.

The tradition of the governor addressing a joint session of each new general assembly, with all 150 members of the House and 30 members of the Senate present in the Statehouse, is simply not possible given the social distancing currently required, the study concludes.

“We very quickly understood there was no way there could be a full return to the Statehouse,” architect Jesse Beck, of Freeman French Freeman, told lawmakers Tuesday.

His Burlington-based architecture and planning firm outlined a range of options for lawmakers in a 94-page report released by the House Committee on Corrections and Institutions.

It concludes that in-person legislating is possible, but would be expensive. Other large government buildings in Montpelier, Barre and possibly Waterbury would need to undergo significant upgrades to create the space needed for lawmakers to safely meet all together or in committees, the study found.

Related Vermonters and Their Government Adjust to Virtual Meetings

Vermonters and Their Government Adjust to Virtual Meetings
By Courtney Lamdin
Politics
For example, it would cost an estimated $85,000 just to outfit the Barre Auditorium for a joint session of two days — such as the governor’s biennial inauguration and budget address — and another $132,000 if the space were used for the rest of the four-month legislative session.

The Statehouse itself would require an estimated $331,000 in upgrades to host the return of lawmakers. Everything would change, including the distance between the tables in the cafeteria, the number of people allowed at once in the speaker’s office, and which urinals and sinks could be used in the bathrooms.

“It’s not going to go back to what it was,” said Catherine Benham, chief operating officer of the legislature’s Joint Fiscal Office.

Vermont Senate to Change Remote Meeting Policy After More Glitches
By Paul Heintz
Off Message
The use of other spaces for legislative business would be a challenge, Benham explained. Locations mentioned in the report include state office buildings near the Statehouse, the Capital Plaza Hotel and Conference Center, the National Life Building, where the state already has significant office space, the Barre Civic Center, the Vermont College of Fine Arts, and the state office complex in Waterbury.

None are ideal and all would require significant changes to keep lawmakers, staff, the public and the press safe, Benham said

There is no guarantee it will happen at all. Much like schools are creating options for returning students, the report gives lawmakers a number of choices, including in-person meetings, a hybrid approach, or continuing with the video conferencing they've used since April, the least expensive option.

One idea that didn’t get a lot of traction from the House committee was a suggestion by Sen. Joe Benning (R-Caledonia) that the 30-member Senate carry on in the Statehouse while the 150-member House find other digs.

Benning said the “overwhelming number” of House members “creates a problem all by itself.” The Senate, however, could “function in its normal environment” by just managing its committee rooms differently, Benning noted.

“It would eliminate the Senate from the equation of how to fix this problem,” he said.

Rep. Alice Emmons (D-Springfield) gently reminded Benning that the House and Senate have equal powers, and having only the Senate in the Statehouse wouldn’t work for her.

“The optics there don’t look very good,” she said.


Emmons stressed that neither her committee nor the full legislature will make the decision about how the next legislature would meet. Rather, the Joint Legislative Management Committee, which is made up of leaders of both chambers, will make the ultimate call.

It’s unclear when the decision will be made.

Read the full report below: