Masked senators returned to the Vermont Statehouse on Wednesday for what could be the final time this year and granted themselves the authority to vote from home.

A group of 16 lawmakers — just enough for a quorum — unanimously approved the virtual voting measure in swift fashion, spending less than an hour in the building.

The new voting protocol will allow senators to start passing legislation without cramming into the Statehouse, where small committee rooms and tight doorways make it nearly impossible to adhere to social distancing guidelines.

"It's a new frontier for all of us," Senate President Pro Tempore Tim Ashe (D/P-Chittenden) told reporters after the vote.

Indeed, for the second time since closing the Statehouse on March 13, lawmakers filed one by one into the Senate chamber and dispersed throughout the cavernous room. Some took up their usual seats behind their long, curved wooden desks. Others plopped onto windowsill cushions and occasionally surveyed the once-packed Montpelier streets now vacant under Gov. Phil Scott’s stay-at-home order.

Fourteen other senators stayed away from the Statehouse at the encouragement of Senate leaders, though a handful maintained a virtual presence, appearing via Zoom on television screens on either side of the lectern.

While it had only been two weeks since the Senate last assembled in the Statehouse to approve several coronavirus relief measures, Wednesday’s session carried an added level of surreality as lawmakers adhered to new guidance on wearing masks in public.

Standing out among the array of protective gear were several bandana-wearing lawmakers who looked as if they were auditioning for a bipartisan stagecoach robbery.

The dramatics ended there, however, as the skeleton crew spent just 30 minutes in the chamber before passing the resolution. Several legislators bookmarked the vote with a quick squirt of hand sanitizer before heading back into the world.

Their counterparts in the House had a far harder time approving remote voting last month after one legislator insisted a quorum be present, prompting dozens of lawmakers to trek to Montpelier. The chamber eventually passed the measure but still needs to hold a remote vote to approve the change.

Among the many questions now facing lawmakers is how to ensure that bringing the show on the road doesn't hinder public participation. Speaking to his colleagues on the floor, Senate Minority Leader Joe Benning (R-Caledonia) underscored the importance of remaining as “open and transparent as possible” even during these unprecedented times. “We will not be perfect, but this is our first attempt at making that work,” he said.

Some believe that the pandemic has actually given Vermonters more access to the sausage-making process since committee meetings are being live streamed for the first time.

Instead of needing to travel to the Statehouse, people can pull up hearings from the comfort of their homes, Ashe said. He added that many constituents have reported tuning in to their first-ever legislative hearing in recent weeks.

“It's not a silver lining. I don't think there's any silver linings in what's going on,” Ashe said. “But one of the byproducts is that the use of technology is proving to open up the doors of state government — especially the legislative process — more than ever.”

The Senate plans to hold a remote voting trial run Thursday before acting on four pieces of legislation Friday, including a bill that would place a moratorium on evictions during the crisis. Other measures would extend some professional license expiration dates and relax regulations on some emergency medical responders.

Ashe said the Senate will eventually have to take up business beyond COVID-19 legislation. But he expected the chamber to remain focused on relief efforts for the foreseeable future. He said it’s too early to know what that means for bills that had once topped the Democratic-controlled legislature’s priorities, like the tax-and-regulate cannabis bill and climate change initiatives.

"With this crisis, there cannot be time spent on anything but making sure that the resources are there to the best of our ability to meet all the public health problems we're facing,” Ashe said. “We'll start mapping out what it would look like once we get on the other side of this, but it's too soon."

Equally unclear is whether the legislature will even be able to return to the Statehouse this year. While Ashe conceded that it's easier to work through major legislation in person, he stressed that the chamber plans to follow all public health orders.

“We want to model what we're expecting the people of Vermont to do to keep people safe,” Ashe said.

The remote voting resolution sunsets at the end of this biennium, so the next legislature will need to decide whether to extend the protocol. Several senators suggested that the chamber might not have a choice, with national health officials warning the coronavirus may flare up again or even become a seasonal affliction.

"We should be anticipating that, after January, we will need to have this rule be a permanent fixture," Benning said before the vote. 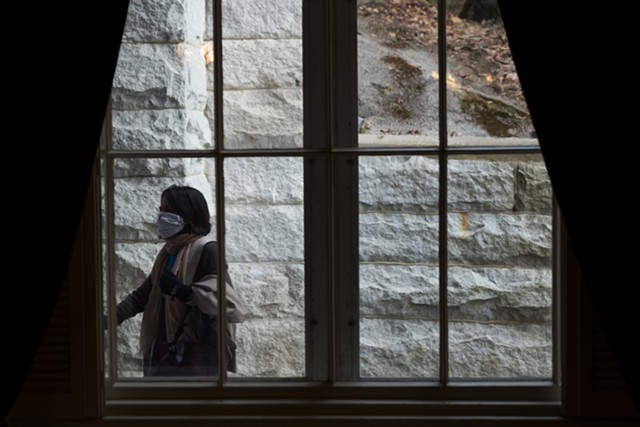