by Derek Brouwer and Matthew Roy

Several hundred protesters marched through Williston to the nondescript Immigration and Customs Enforcement intelligence center on Sunday in an effort to draw attention to the state’s little-known role in Trump’s national immigration crackdown.

Nineteen people were cited for disorderly conduct after blocking entrances to the 24-7 facility for two hours. But the federal government’s pursuit of undocumented immigrants continued unabated, as ICE’s sister agency, Customs and Border Protection, set up a highway enforcement checkpoint in South Hero during the widely publicized demonstration against federal deportations.

With participation from more than 60 activist groups, the protest began in pouring rain outside Vermont Technical College's Williston campus, which has contracted with ICE for small workforce training programs.

Hundreds then marched with a Williston Police escort along Route 2A, waving signs that condemned federal "concentration camps" for apprehended immigrants and called for the abolition of ICE. One person wore a chicken suit with a sign that read, "only cage-free children PLEASE," in reference to holding cells for migrant children on the southern border. Marchers eventually gathered in the street outside ICE's Law Enforcement Support Center on Harvest Lane. Slideshow: ICE Protest and Border Patrol Checkpoint
By Derek Brouwer and Matthew Roy
Click to View 17 slides
The office serves as a headquarters for the agency's information-sharing with other law enforcement agencies, aiding thousands of immigration arrests across the country. It has operated in Williston since the 1990s, when Sen. Patrick Leahy (D-Vt.) secured funding. It employs about 400.

The grounds were roped off with police tape Sunday afternoon, but cars in the parking lot indicated the center was still operational. A handful of Department of Homeland Security police and two working canines stood outside the front doors as protesters streamed past.

Kina Thorpe, an educational program manager at the Burlington-based Peace & Justice Center, roused the crowd by reading excerpts from a 2017 federal news release about the facility. The release boasted of Vermont ICE employees' "enviable" lifestyle, including the state's low crime rates and "thriving farm-to-table restaurant scene."

"The unassuming building behind us is part of a horrible, horrible mission that is deporting innocent people who are just trying to live their life and support their families," Thorpe said.

The crowd broke into a chants of "Shut it down!" and "Get a new job!"

Speakers hammered ICE over family separation policies and cramped conditions at detention centers. Others highlighted the plight of immigrant farmworkers, who risk deportation even as they power Vermont's agricultural economy.

"Our need to move urgently now should have come years ago, if not generations ago," Yolanda Huerta, of Upper Valley Interfaith Action, said.

Walmart Arrests Show Why Undocumented Farmworkers Are Leery of Food Shopping
By Derek Brouwer
Crime
During the speeches, some protesters jostled to interrupt a television news interview with a few counter-demonstrators, one of whom held an "ICE = Safety" sign. Others heckled the DHS staffers who watched silently from the center's front doors.

Afterward, 19 demonstrators sat down and linked arms across the driveways to the ICE building. Two hours later, they moved their act of civil disobedience to the road when DHS officials threatened to charge them with federal offenses, two of the demonstrators said.

Williston police politely arrested them one-by-one for refusing to leave the right-of-way. They received citations to appear in state court August 13. 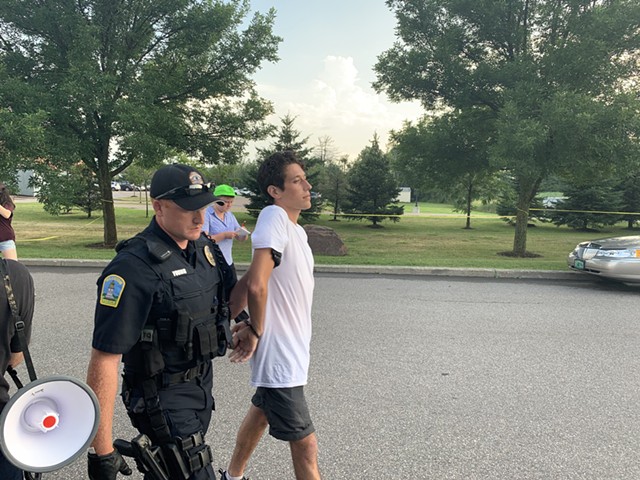 MacKenzie Murdoch, 19, said she blocked the road to draw attention to what she called Vermonters' complicity in the federal deportation scheme.

"We act like everything is OK here, but we are one of the biggest enablers in all of the things that ICE is currently working to do," she said.

Even as the protest hit its height, authorities pursued another immigration enforcement effort just 30 minutes away. U.S. Border Patrol set out traffic cones and stop signs and established a checkpoint, halting vehicles on the causeway that connects South Hero to Milton.

"How are you today, sir? Citizenship, please!" an agent cheerfully announced to a Seven Days staffer who was driving off the island.

"Thank you. Have a good day, sir," the agent responded, waving the car through.

The officers, some of whom had working canines, from time to time told a motorist to pull into a parking area. One man waited while agents grouped around what appeared to be a potted cannabis plant nearly as tall as them. After a delay, the man hoisted the plant into his blue Prius and drove off with it.

Around then, Will Lambek of Migrant Justice, the farmworker advocacy organization, arrived.

"This is just one tool in a larger toolbox terrorizing immigrants who are living and working in Vermont," he told Seven Days. "Whether it's Border Patrol checkpoints or racial profiling or arrests on and around farms, this is part of striking fear into the immigrant community. And it's an intentional strategy." 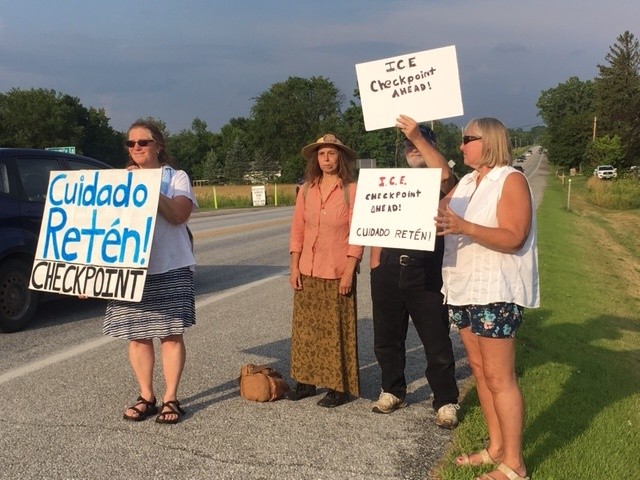 Border patrol agents have ramped up checkpoints in Vermont this year, though they are still relatively infrequent.

Asked if he thought the timing of Sunday's checkpoint was related to the ICE protest, Lambek answered, "I don't want to speculate on it, but it's hard not to draw conclusions that the two are linked in some way." (On Monday, a border patrol spokesperson said the checkpoint had been planned for weeks "based on intelligence gathering and personnel staffing.")

Meanwhile, activists arrived to warn motorists about the checkpoint. They set up about a mile in advance of the traffic cones, in South Hero. Debra Stoleroff of Plainfield held up a sign that read "Cuidado Retén! Checkpoint."

Stoleroff and others in her group said they get texts when checkpoints are spotted and try to respond quickly.

As more volunteers showed up to warn motorists, the Border Patrol vehicles passed by, headed away around 6:30 p.m. As easily as it had been set up, the checkpoint had been broken down and carted off.
Prev
Next