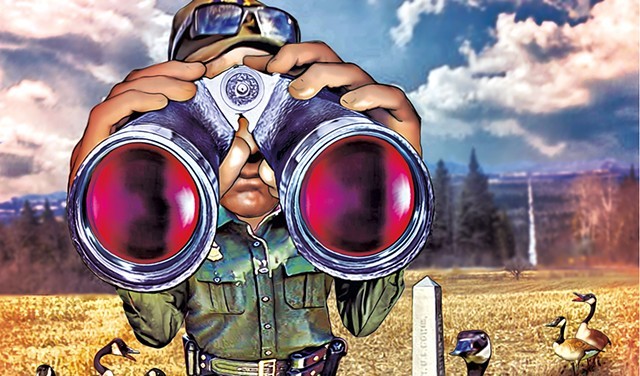 Vermont's congressional delegation on Wednesday became the latest officials to express concerns about a U.S. Customs and Border Protection proposal to construct surveillance towers along the state's border with Canada, with many calling the plans an unwarranted threat to personal privacy.

The federal agency has proposed up to eight new camera sites in Vermont, with 120-foot surveillance towers floated at five potential locations in Derby, Franklin, Richford, Highgate and Troy. Other cameras could be placed on existing buildings in Derby Line and Highgate, according to a plan unveiled last month; two other towers are proposed for New York.

Border patrol already uses cameras in locations along Vermont's border with Canada. But the towers would be the first of their kind in the state, marking a significant escalation in the agency's surveillance program here. More than two dozen other towers are already in use across various northern border points to the west.

Erik Lavallee, acting patrol agent in charge of the Newport station, described the camera towers as a "force multiplier," allowing the agency to detect potential threats without needing to send agents into the field. He said the towers have played a role in arrests of weapons runners or exotic bird smugglers. They can also detect when motion-sensors are trigged for innocent reasons, "such as a moose crossing."

"There’s a lot of issues out there surrounding the border these cameras can help rectify, and ensure a more solid public safety," he told Seven Days on Wednesday.

Border Agents Need 'Reasonable Suspicion' to Search Devices, Judge Rules
By Colin Flanders
Off Message
But critics say the towers are ripe for abuse, particularly in the hands of an agency that has been repeatedly dinged for overstepping its authority in the past.

"Vermonters could not find a less trustworthy federal agency to undertake this proposal," James Lyall, executive director of the American Civil Liberties Union of Vermont, said in a statement last month. "CBP has a toxic internal culture, is responsible for heinous, widespread and continuing human rights abuses nationwide, and operates with no meaningful oversight or accountability."

The agency ended a 30-day public comment period on Monday. It must next review the comments before it issues a final environmental impact statement. No timetable has been set for construction.

The agency has not said how much public feedback it received. But at least 300 people sent comments in using a form created by the ACLU of Vermont, according to the organization, with more likely filing through other channels.

Lavallee met with a group of residents on Wednesday for a tour of the proposed tower site in Derby, where Border Patrol has already erected a smaller, temporary tower.

He told Seven Days that the most frequent complaint he has heard from locals is that the towers could be used to monitor their daily lives. His response: "I have no concern with what's going on in someone's backyard."

"When it comes to the use of these cameras, they are used to watch the border, plain and simple," he said.

That doesn't mean the cameras will never catch sight of someone's property. The cameras have a wide scan radius that might inadvertently catch sight of yards and homes, Lavallee said. The agency might also train the cameras in such locations on purpose to follow the movements of someone who has crossed the border illegally.

But while residences may occasionally be swept up in the surveillance program, "that is not the intent behind it, and that is not what it’s being used for," Lavallee said.

Such assurances haven't been good enough for some of Vermont's top elected officials.

The lawmakers fell short of demanding that the feds quash the plan. But they did call for a 60-day extension to the public comment period to allow for more input — both "citizen and congressional."

Vermont Attorney General T.J. Donovan has also questioned the plan, arguing in his own public comment this week that the cameras could be used for "unwarranted surveillance or potential interference with the privacy interests of Vermonters."

He said the agency had failed to make a compelling case for why the project is necessary and called on it to implement "adequate safeguards" for its surveillance program.

"My expectation is that the CBP, in service to the public, will balance its needs for public safety with the privacy interest of those it is sworn to protect," he wrote.

Sanders, Leahy and Welch Object to Border Patrol's Checkpoint Plans
By Mark Davis
Off Message
Lavallee, the border patrol agent, could not say whether Vermont has experienced a recent uptick in illegal activity along the border that would necessitate new surveillance techniques. But he said the 295-mile Swanton border sector — which stretches from western New York to the eastern border of New Hampshire — reports a higher number of illegal crossings than the other northern sectors combined.

It's unclear what figure Lavallee was referring to. The Swanton sector reported 1,056 apprehensions in fiscal year 2019, second to Detroit's 1,322, while the entire northern border reported 4,408 apprehensions combined, according to federal data. The southern border, meanwhile, reported 851,500. Lavallee could not be reached for clarification.

Lyall, the ACLU of Vermont director, said in an interview on Wednesday that the feds have given no compelling reason for why the cameras are an immediate need.

Lyall spent five years focused on border issues while living in Arizona before he moved to Vermont. He recalled living and working in communities that were "transformed" by a militarized border patrol presence, including surveillance towers. He said Vermont should forcefully reject the proposal.

"There are American border communities in this country that look like war zones," he said. "And I don't think that's what Vermonters want for their communities."
Prev
Next