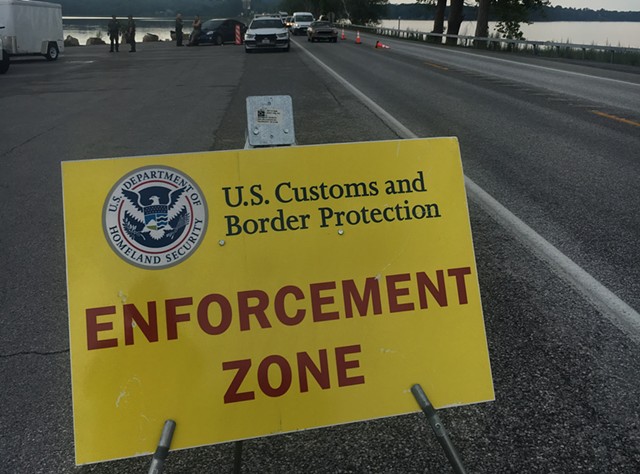 The federal complaint says that U.S. Border Patrol agents use the interior checkpoints for general crime control instead of immigration enforcement.

As a result, Border Patrol detains hundreds, if not thousands, of individuals who are lawfully traveling in northern New England without any suspicion that they have broken any laws, the ACLU affiliates said in a press release.

“In addition to being unconstitutional, these checkpoints offend basic notions about what it means to live in a free society,” Lia Ernst, ACLU of Vermont senior staff attorney, said in the release. “People in this country should not have to answer to armed and unaccountable federal agents while they are going about their daily business."

Border Agents Need 'Reasonable Suspicion' to Search Devices, Judge Rules
By Colin Flanders
Off Message
The lawsuit was filed in the Granite State on behalf of Jesse Drewniak, who was traveling home from a fly-fishing trip in August 2017 when he was stopped at a border patrol checkpoint on Interstate 93 in Woodstock, N.H., some 90 miles south of the Canadian border.

Drewniak and 15 other people stopped at the checkpoint were charged for possessing small amounts of drugs — mostly marijuana, according to the ACLU.

In 2018, the ACLU argued that the primary purpose of the stops was to detect and seize drugs, a role beyond the Border Patrol's authority. Agreeing that the searches were unconstitutional, a federal judge moved to suppress all evidence from the checkpoint.

New Hampshire authorities later dismissed charges against the 16 defendants, but the ACLU affiliates say Border Patrol has continued the practice throughout northern New England. The lawsuit asks a judge to require that the feds immediately cease checkpoints in Woodstock.

The complaint also challenges Border Patrol's long-held stance that it can legally stop and search travelers without a warrant or reasonable suspicion within 100 miles of an international boundary or coastal body of water — a zone that includes about 90 percent of Vermont and, according to the ACLU, covers roughly 200 million people across the U.S.

As Hundreds Protest ICE, Border Patrol Runs a Checkpoint
By Derek Brouwer and Matthew Roy
Off Message
“Border Patrol is charged with protecting the border," Gilles Bissonnette, legal director of the ACLU of New Hampshire, said in the release.

"It is unconstitutional for Border Patrol to use interior checkpoints, nearly 100 miles from the border, as a ruse to unlawfully search and seize people for the purpose of general crime control," Bissonnette continued. "Yet this is exactly what Border Patrol is doing with checkpoints in northern New England."

Vermont's congressional delegation cosponsored a bill in 2018 that would have reduced the 100-mile zone to 25 miles and placed other restrictions on border patrol activities, but the legislation went nowhere.
Prev
Next