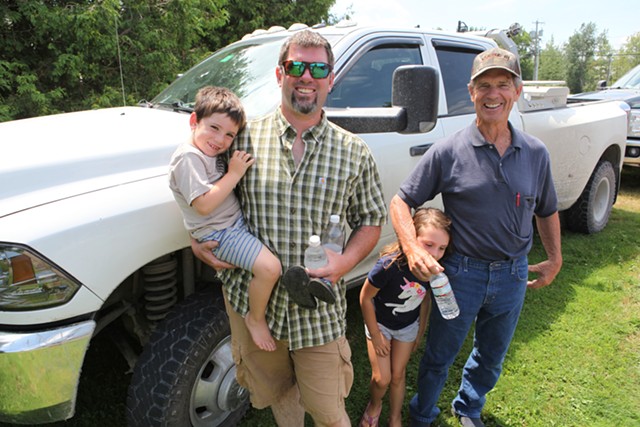 Members of the oldest independent dairy cooperative in Vermont voted Monday to merge with a Kansas-based national dairy co-op in a bid improve the fortunes of struggling farmers in the region.

By a vote of 99 to 9, members of the St. Albans Cooperative Creamery agreed to have the co-op, trucking company and retail store become a wholly-owned subsidiary of the 14,000-member Dairy Farmers of America.

The outcome was not a surprise, as the co-op's board voted unanimously in favor of consolidation last month. But the decision to end 100 years of independent operation was nevertheless a consequential one for many farmers.

“I guess it’s kind of an unfortunate situation,” said Chris Sunderland, who milks about 130 cows in Ellenburg Depot, N.Y. “At this point in time, it’s the best we can do to save what we have.”

Sunderland and others spoke to reporters as they made their way into or out of the co-op meeting at the American Legion Hall north of St. Albans, where the parking lot was full of heavy-duty pickup trucks. The press was not allowed into the meeting.

While some had misgivings about the merger, most farmers accepted it as the only way for the 340-member co-op to compete in an era of low milk prices, increasing regulation and steady consolidation.

“I think it’s a good day,” said Jim Magnan, whose family operates a 520-cow dairy in Fairfax. “Everybody has to move on. If you stop growing, guess what?”

Others were blunt about the bleak future they anticipated had the proud co-op continued to go it alone.

“This is certainly better than going bankrupt or some crazy thing where we lose everything,” said Cedric White Jr., who farms about 120 cows in East Fairfield. White has been a member of the co-op for 30 years and wants to make sure his farm is around for his son, Cedric White III, to take over someday.

The steady decrease in the number of farms in the co-op in recent years, its deteriorating finances and the need for major upgrades to the creamery gave the decision an air of inevitability.

“The guys have done as good as they can but, I mean, we haven’t seen any returns for the last few years,” White said. “It makes a lot of us nervous.”

Dairy Farmers of America has pledged to spend $30 million to upgrade the St. Albans processing plant and another $5 million in the trucking company.

Farmers may not immediately see higher prices for their milk, but the benefits should still be substantial, said Bill Rowell, co-owner of 900-cow Green Mountain Dairy Farm in Sheldon.

Northeast dairies were forced to dump 170 million pounds of milk in 2017, in part because of capacity issues in the system. Partnering with a large organization will help ensure those farmers get paid for milk instead of getting nothing, he said.

"We're all in the same boat, big or small. None of us are making any money," Berard said. "DFA didn’t have to do this. They could have bought us out of bankruptcy two, three years down the road.”