The longtime owners of the Rutland Herald and Barre-Montpelier Times Argus are preparing to hand off the papers to two out-of-state investors.

"It looks like we will close the sale late this week, although that may still change," editor in chief Rob Mitchell wrote employees Monday, according to an email obtained by Seven Days. Mitchell's family has owned the Herald since 1947 and the Times Argus since 1964.

Chip Harris, who agreed last month to buy the papers with partner Reade Brower, confirmed Monday that the sale was imminent.

"There's been no official date at this point," said Harris, a semi-retired publishing executive who lives in New Hampshire. "But the hope is we'll be closing by the end of the week."

In his email, Mitchell said that, "as part of this transition," publisher and CEO Catherine Nelson "has decided to leave the company and is retiring."

"We should all wish her well in whatever comes next for her," Mitchell wrote. "My father [Herald Association president R. John Mitchell] and I will be backstopping her role this week or until the sale is final, so if you have questions please come to me or to Dad."

It was unclear whether Nelson's departure was voluntary. Neither she nor the Mitchells responded to requests for comment. Harris said Monday that he did not know Nelson's retirement had been announced, but he said it was "something, I think, that developed mutually."

"I'm not overly surprised, because it's probably the right time to be doing that," he said. "If retirement is in the not-too-distant future, it would probably make sense to do it at the time the paper is turned over."

Nelson, who has worked for the papers since 2006, was appointed publisher just eight months ago, when R. John Mitchell stepped down from that post. The day after he announced her promotion last December, VTDigger.org reported that she had been arrested days earlier for driving under the influence of alcohol and leaving the scene of an accident. The elder Mitchell later acknowledged that he had been aware of the arrest when he named Nelson publisher but did not tell his newsroom staff.

Also Monday, Herald staff photographer Anthony Edwards told Seven Days that he had been fired that morning after complaining that he had not been reimbursed for expenses. 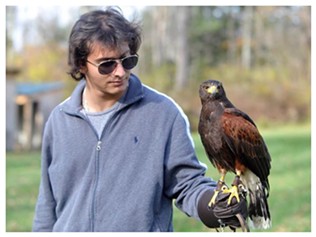 "I live paycheck to paycheck. I don't make a lot of money," he said. "I need my expense checks to work the next week, because that's my gas money."

Edwards, who has worked for the Herald for four years, said he is typically compensated for expenses on Fridays. When he learned last Friday that he would not receive a check that day, he recalled, he texted Rob Mitchell to say that he would not work the weekend. On Monday, he showed up to work and met with the editor.

"I said, 'What the fuck? What happened to our expense checks?'" Edwards recounted. "He said my texting him and telling him I couldn't work was 'inappropriate.'"

According to Edwards, Mitchell then told him he was being let go.

"I said, 'Well, you're doing me a favor, because I was going to quit tomorrow anyway, and now I can collect unemployment,'" Edwards recounted. "I told him, 'I want my fucking money by the end of the week, or I'll be taking legal action.'"

Later that day, according to Edwards, Mitchell texted him to say that he would be made whole.

The Mitchells have previously failed to pay their employees in a timely manner. As Seven Days first reported early last month, the papers failed to reimburse employees and did not pay freelancers at all for a period this summer. Later that week, the Herald itself published a story documenting the nonpayment. Edwards was among those quoted by his own paper.

Edwards said Monday that he was fed up with being stiffed by his former bosses.

"I don't know how they expect to run a business when they can't even treat their employees with a little bit of respect by paying the bills," he told Seven Days.