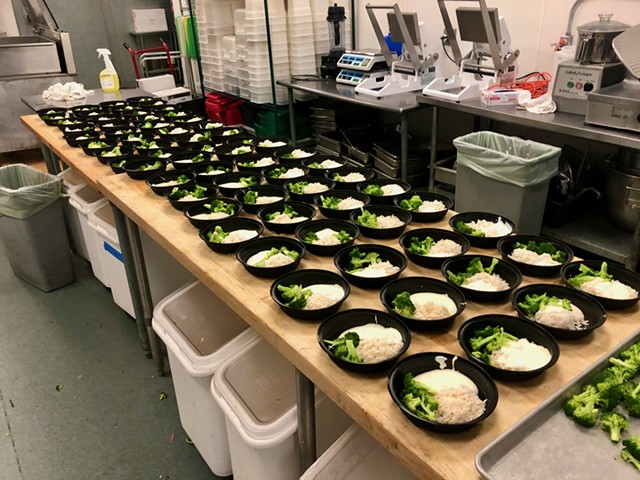 In late March, about a week after Gov. Phil Scott ordered restaurants to close to stem the spread of the coronavirus, the Skinny Pancake turned its commissary kitchen in Winooski into the cooking site of a program called ShiftMeals.

The initiative was designed to provide free meals to restaurant workers, musicians and other Vermonters who lost their jobs during the pandemic and were in need of food assistance.

ShiftMeals then formed a partnership with the Vermont Foodbank to expand its reach. The program currently has 18 distribution sites around the state and has provided 50,000 meals to Vermonters in need, with a goal of distributing 100,000 meals by year's end, according to ShiftMeals director Jean Hamilton.

Now ShiftMeals is serving as a model for a statewide initiative, backed by $5 million in government funding, in which restaurants around the state will use their facilities and employees to help feed Vermonters who are experiencing food insecurity. The new program, called Everyone Eats, was announced Monday morning at a press conference outside the Skinny Pancake’s Lake Street restaurant in Burlington.

Everyone Eats gets its name from a government-funded pilot program in Brattleboro which, like ShiftMeals, provides restaurant meals to people in need.

“Vermonters are an incredibly creative and ingenious lot,” Lt. Gov. David Zuckerman said at Monday’s event. “When there’s a good thing, you want to replicate it and help it blossom.”

The state legislature allocated $5 million dollars in CARES Act federal relief funding for the program, which could provide 18,500 meals a week to food-insecure Vermonters through the end of the year, officials said.

Ten percent of the funds, or $200,000, must be used to purchase food from local farmers and producers.  Five large restaurants and a network of 40 smaller ones will participate in Everyone Eats, according to a press release about the program. The restaurants have yet to be identified.

Rep. Jean O’Sullivan (D-Burlington), who attended the press conference, noted “three sectors in need” that will be served by the program: farmers, restaurants and some 70,000 unemployed or underemployed Vermonters.

“I’m so pleased and proud this program is going forward,” she said.
Hamilton, the ShiftMeals director, told Seven Days by phone that restaurants are well positioned to offer an emergency response to food insecurity because the industry is adept at responding to changing circumstances rapidly and with flexibility.

“We have this asset pool, this infrastructure, that is diversified and can easily be scaled up or down by bringing on more restaurants,” Hamilton said. She noted that a number of communities in Vermont launched meal assistance programs when the pandemic struck.

“It’s been amazing and exciting to see all of these programs emerge simultaneously and then be able to come together with a cohesive vision of a statewide program,” Hamilton said. “The way the model is currently developed, funding will be dispersed across the state through community-scale projects."

Government funding is critical to support and build meal assistance programs given the scale of the need, she said.

Roughly One-Third of Vermonters Need Food Assistance During the Pandemic
By Sally Pollak
Food + Drink Features
Since the start of the pandemic, food insecurity in Vermont has increased by 46 percent, according to Nicole Whalen, communications director of the Vermont Foodbank.

“I am thrilled that the state is making an investment in helping people who are in need of food access it,” Whalen said. “And it’s great that they’re finding a way to do it that also supports local businesses.”
Prev
Next