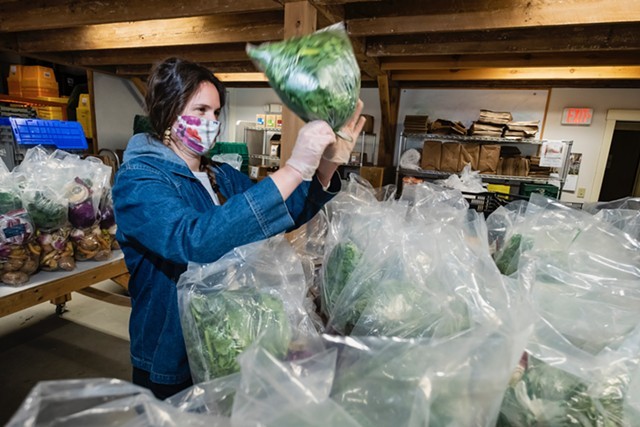 The Vermont Foodbank has received the largest gift in its history — $9 million — as part of a $4.2 billion blast of charitable giving announced this week by MacKenzie Scott, the ex-wife of Amazon founder Jeff Bezos.

The gift was unsolicited, came as a total surprise to the organization and was kept quiet until Scott announced it Tuesday in a blog post.

“It was a little bit of a shock,” Vermont Foodbank CEO John Sayles said. “It’s by far the largest gift the Foodbank has received.”

In a post titled "384 Ways to Help" — a reference to the number of organizations that received gifts — Scott wrote that she and her advisers looked at nonprofits "with strong leadership teams and results, with special attention to those operating in communities facing high projected food insecurity, high measures of racial inequity, high local poverty rates, and low access to philanthropic capital."

The post did not reveal the amount each organization received.

Sayles told Seven Days on Thursday that he doesn’t know how the $9 million was determined, but it's approximately equivalent to the nonprofit’s entire 2019 operating budget.

“I would call this a transformational gift,” Sayles said. “It will give the organization the opportunity to do things that certainly we would dream about doing but really wouldn’t have realistic expectations of executing.”

The Vermont Foodbank is the largest hunger-relief organization in the state, collecting food donations from producers and retailers and distributing the goods through 300 partners to food shelves, senior centers, schools and hospitals around the state.

The organization plans to work with its partners to best determine how to use the gift, not just to expand its programs, Sayles said, but to leverage the cash to have a long-term impact on social issues at the root of hunger.

“If we thought about this gift as just replacing funds that we would otherwise raise, that would be a real loss for people in Vermont,” he said. “I think we should think about this in transformational ways.”

Sayles said he received an unexpected email on the morning of December 3 telling him a philanthropist wanted to discuss a donation. He gets such contacts from time to time and didn’t think much of it. They set up a call for the following morning.

“There wasn’t anything in there that indicated this was anything extraordinary,” he said of the email.

When he got on the line with the emailer the next morning, she identified the donor as Scott, whom Sayles knew as a major philanthropist.

Scott is one of the richest women in the world. She received 4 percent of the outstanding shares in Amazon when she and Bezos divorced last year, worth about $38.4 billion at the time. The value of Amazon’s stock has surged since, and some estimates put her fortune at $62 billion. In 2019, she signed the Giving Pledge, committing to give away most of her wealth in her lifetime.

When the person described the size of the proposed gift, Sayles said his shock soon gave way to feelings of humility and deep gratitude.

“It has taken a little while for something like that to sink in,” he said. “It was just a great act of generosity.”

There were no strings attached to the gift beyond agreeing not to go public until Scott did, a condition to which he readily agreed. Honoring the wishes of prospective donors is common, he said. Now that the gift has been received, Sayles felt a responsibility to be transparent about it.

The previous largest donation to the Foodbank was a generous but anonymous bequest from the estate of a wealthy Vermonter. It was “several times smaller” than Scott’s gift, he said.

Even as he marveled at Scott's generosity, Sayles said he’s daunted by the scale of the hunger problem  in the nation, especially since the pandemic. He noted that federal food assistance for low-income families in Vermont cost $120 million annually.

“One person alone, or even a gift of this size, isn’t going to solve hunger in Vermont or across the county,” he said.

But perhaps a series of such gifts — Scott gave to 41 food banks across the nation, as well as United Ways and other social welfare organizations — will help kickstart a movement.

“How can we envision what food access can look like with this kind of investment, and how can we leverage it?” Sayles said.

The first order of business is to make sure the Foodbank can maintain its support of people in these extraordinary times, he said.  It also gives the nonprofit an opportunity to work with partners to strategize ways to root out the systemic inequities that lead to hunger in the first place.

“Really if you look at it closely with an equity lens, poverty is a result of racism and oppression,” he said.

The Foodbank’s VeggieVanGo already offers free farmers markets somewhere in the state nearly every day in normal times, but expanding meal deliveries to the needy is one way to reach more people. Tailoring meals to those with health issues such as diabetes has benefits that include helping keep down overall health care costs, Sayles said.

The process of ensuring Scott’s gift has maximum impact on Vermont communities has only just begun.

“It’s going to take some work to figure out how to use this to try to make some long-term change. That’s our goal,” he said.
Prev
Next