Plenty of Vermonters waited to cast their ballots in person on Election Day and were hitting the polls Tuesday despite chilly weather, slate-gray skies and morning snowfall.

Roland Bluto, 74, stood in line at the Milton town offices wearing a baseball cap, a flannel shirt and a lined jean jacket early in the morning.

“I’ve been voting in person since I was 18, so for me, it’s a tradition,” he said. And like many other voters turning out in person, Bluto said he also wanted to make certain that his vote was counted.

Milton residents Raymond and Nancy McNamara wore matching American flag masks with images of German Shepherds on them as they waited in Milton. Early balloting was not for them.

“We are horrified that Vermont decided to send everybody a mail-in ballot,” Nancy said.

“My wife and I are both in our seventies,” Raymond said. “We are not afraid of the virus.” He added, “I am all about my country. I served in Vietnam for four years. I served in law enforcement for 40 years, and I am a true American patriot.” 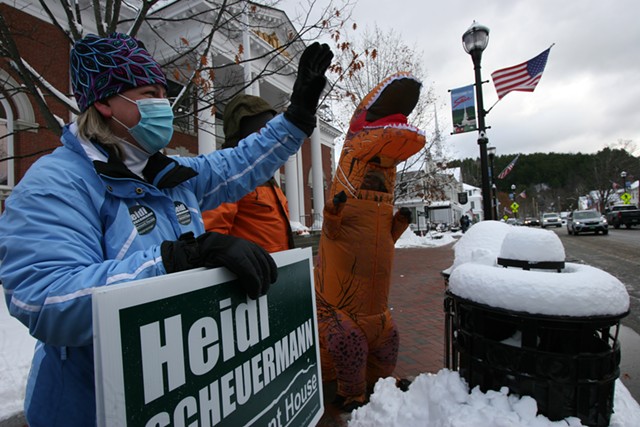 Voting was steady as well in Stowe, where Mat Clouser said he turned out for one reason — to vote President Donald Trump out of office. The 43-year-old chef and lifelong Democrat moved to Vermont from Texas this year. “Basically, I’m worried Trump's going to win again,” he said.


Stowe's longtime Republican state representative, Heidi Scheuermann, stood next to a supporter in a Tyrannosaurus costume and shouted greetings to voters. Nearby, her opponent, Democrat Jo Sabel Courtney, and her crew offered coffee and snacks to passersby. Scheuermann was hoping to fend off Sabel Courney's challenge in a district that has been turning bluer. Scheuermann said she was seeing lots of voters she’d never spotted before at the polls. She suspected turnout will be a Vermont record.

In the Onion City, Van Dora Williams, a professor at Champlain College, dropped off her completed absentee ballot at the Winooski Senior Center.

“It was absolutely amazing to be able to see the ballot ahead of time,” Williams said. She had shared it with her students to examine the long and confusing list of presidential candidates.

Williams, who is Black, described the sacred importance of voting — especially among members of historically disenfranchised groups. “I have a history of being excluded from casting my ballot, so being able to vote is a reminder for me of why it’s so important," she said. "It’s also a way of honoring my great-grandfather, who was a civil rights activist in the South.” Turnout nationwide is driven largely by presidential politics. In Milton, Bluto was hopeful that Americans can move past the divisiveness of the political landscape.


“We need to stop the ‘I’m a Democrat and you’re a Republican, therefore I can’t agree with you’ thing and move on,” he said. He'll support whoever wins, he said, and hopes others can too. “I hope we can heal and get back together.”

University of Vermont students Kenzie Imhoff, Mia Dillon and Ryan Joseph contributed to this report. Their reporting, and that of other students, can be seen here.
Prev
Next