After Biden Win, Election Celebrations Erupt in Burlington | Off Message 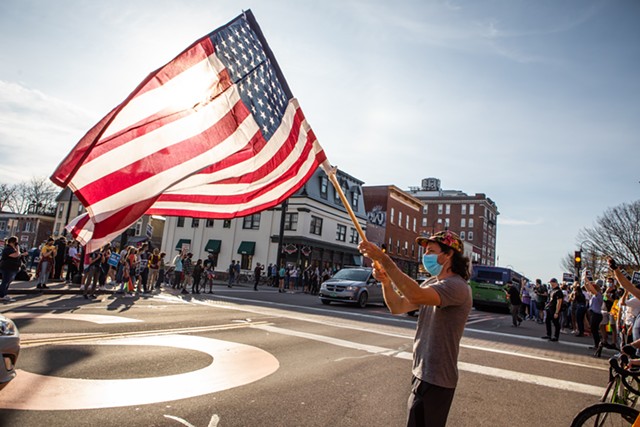 People sang, cheered, honked and literally danced in the streets of downtown Burlington on Saturday as word of Joe Biden's election victory spread.

A crowd gathered on Church Street at the intersection with Main Street, where volunteers just months ago painted a huge Black Lives Matter mural on the road. Drivers honked their horns as they rolled through the crowd, which erupted into cheers each time.

Some waved American flags. A few held up homemade signs: "You're fired!" was a popular one.

Downtown streets were gridlocked through the afternoon, and the crowd showed no sign of letting up.

Shortly after the Associated Press and other news outlets called the race for Biden, Gov. Phil Scott issued a statement congratulating the president-elect and his running mate, Kamala Harris.


“This is our moment in time to reclaim our moral compass, move the United States forward and live up to our greatest ideals: Equal rights, equal justice and equal opportunity for every American," wrote Scott, who voted for Biden.

Outside the Statehouse, some Trump supporters waved flags and signs. A few dozen Biden and Harris supporters celebrated as well on the sunny afternoon.  Lauren Griswold was among the latter group.

"It's just a huge sigh of relief," Griswold said. Burlington Celebrates Biden and Harris' Victory
By Luke Awtry and Matthew Roy
Click to View 29 slides
Kevin McCallum contributed reporting. The slideshow on this post was updated with additional photos on November 9, 2020.
Prev
Next