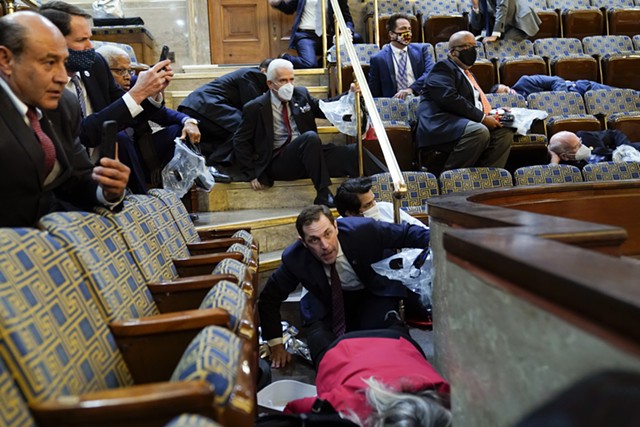 Vermont senators overwhelmingly joined their House colleagues Friday in approving a resolution calling for President Donald Trump to immediately resign from office or be removed from power.

The Senate’s 29-1 vote on the joint resolution follows its passage in the House Thursday afternoon by a 130-16 vote.

Senators did not debate the merits of the measure, but afterward, echoing comments she made the previous evening, Senate President Pro Tempore Becca Balint (D-Windham) issued a statement asserting that lawmakers’ oaths to defend the constitution obliged them to act.

“Regardless of party, we share a clear and public commitment to the rule of law, to the people, and to the ideals of this great state, which were violated by the President and the extremists who attacked the Capitol,” Balint said.

The resolution notes that Trump addressed supporters on Wednesday, “urging them to go to the U.S. Capitol in support of his false claim that he won the 2020 presidential election” before they "violently stormed the building, attacking police officers, ransacking offices, terrorizing the members of Congress, and forcing the stoppage of the certification of President-elect Biden’s electoral victory.”

The resolution condemns the violence, concurs with Gov. Phil Scott’s call for Trump “to resign or be removed from office,” and also calls for copies of the resolution to be sent to Trump, Vice President Mike Pence and Vermont’s congressional delegation.

Sen. Russ Ingalls (R-Essex/Orleans) cast the lone no vote. Ingalls, a Newport real estate agent who just took office, won his seat after the incumbent Democrat, John Rodgers, missed a campaign filing deadline and was forced to run as an independent. Ingalls did not immediately return a call for comment.

The full list of House members who voted against the resolution was not available. The House's voting software system, Everbridge, did not display how individual representatives voted Thursday. House Clerk BetsyAnn Wrask did not respond to a request for additional information.

Conor Kennedy, chief of staff for House Speaker Jill Krowinski (D-Burlington), said the remote voting system used Thursday is meant to replicate a voice vote in the House chamber. Since no one called for a roll call vote, how individual lawmakers voted was not publicly documented, he said.

The clerk, to ensure an accurate tabulation, is aware at the time of voting who voted how, but like the clerk's notes, the Everbridge tabulation is a "transitory record" that is incomplete and therefore not public, said Kennedy, who conferred with a legislative attorney on the issue.

Just like after an in-person voice vote, the press is free to follow up with members to ask how they voted, and it is "up to their discretion how they respond to that request," Kennedy said.

Rep. Tom Terenzini (R-Rutland) said he voted against the resolution Thursday due in part to how little time remains in Trump's term, which ends on January 20.

“I would just like to see the president quietly leave office without all this other nonsense about impeachment and removal from office,” the former corrections officer told Seven Days.

While he did not condone the violence, Terenzini accused the “socialist Democrats and Progressives” in Montpelier of hypocrisy. While eager to pass resolutions designed to “make Republicans across the United States look bad,” they've not shown similar outrage when “cities were being burned down” by Black Lives Matter protesters and antifa last year, he contended.

“It’s always the Trump people that are the targets,” he alleged.

Asked whether perhaps Vermont leaders didn’t see those incidents —  which followed George Floyd's killing by an officer who knelt on his neck — as worthy of condemnation as a mob incited by a sitting president attacking the U.S. Capitol to thwart the peaceful transition of power, Terenzini responded that the destruction of businesses was equally appalling.

He noted that Vermont's leaders never chose to condemn the damage to businesses from the riots in Minneapolis. Local media reports put the number of businesses destroyed at roughly 1,500 and damage at $500 million.