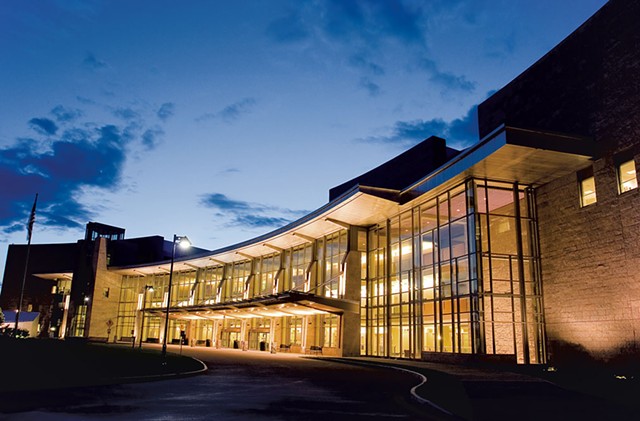 University of Vermont Health Network hospitals continued to rely on old-fashioned, paper-based systems Friday, two days after a cyberattack crippled key digital infrastructure. And according to Dr. Stephen Leffler, president and chief operating officer of UVM Medical Center, it remains unclear when its electronic medical records system and other operations will be back online.

"I can tell you that there's days in front of us where we'll be using a paper system," he said during an afternoon phone briefing with reporters.

Leffler emphasized that the six Vermont and northern New York hospitals within the network continue to serve patients — albeit at a slower pace and with some limitations. "We have been caring for people without issue," he said, adding that staff were well-trained on contingency plans and had "switched pretty seamlessly to paper."

According to Leffler, UVM Medical Center on Friday performed roughly half of the surgeries it typically does. "The biggest issue really is efficiency," he said. "When we're on the electronic medical record [system] and all the pieces are connected normally, we can be very efficient in how we deliver care."

Federal and state officials confirmed Thursday that they were investigating the attack, but neither they nor the health network have confirmed that it was part of an apparently coordinated strike on hospitals around the country. Federal agencies and cybersecurity experts have said that Russian cybercriminals have been perpetrating the attacks, which use ransomware to hold health care data and systems hostage.

At an unrelated press conference in Montpelier on Friday, Gov. Phil Scott said the state was working closely with the health network to ensure patient safety. "Our Department of Public Safety, alongside state and federal law enforcement, are working together to give support and to determine whether it's connected to other similar events throughout the country," he said.

Scott added that state IT systems appeared unaffected. He said that his administration was "working around the clock" to ensure that the COVID-19 testing it administers would not be interrupted.

Leffler declined to comment on most aspects of the investigation, referring questions to the Federal Bureau of Investigation. "I am unaware of any requests for ransom," he said. "But I may not be involved in that."

Health network employees, patients and family members who contacted Seven Days described an array of challenges caused by the cyberattack and the response to it.

Rachel Currier of Burlington said her grandmother had been admitted to Central Vermont Medical Center on Thursday with a malfunctioning pacemaker that seemed to be shocking her several times a day. The hospital initially planned to transfer her to UVM Medical Center to replace the device, Currier said, but held off due to the effects of the cyberattack and is monitoring her in Berlin instead.

"In the meantime, her pacemaker continues to short out, which she says doesn't hurt, although it apparently renders her temporarily unconscious when it happens," Currier said.

South Burlington resident Kara Kraus said her husband’s cancer treatment had been put on hold after the attack took down UVM Medical Center’s systems. He typically receives radiation and chemotherapy treatments every weekday, but his appointments were canceled from Wednesday through Friday.

“It’s a big deal to have to delay treatment,” Kraus said. “All the cancer treatment to shrink his tumor is on hold indefinitely. They said they’re hoping to resume Monday, but it’s possible we’ll have to find another hospital to bring him to.”

Kraus’ daughter was scheduled to have a CT scan Thursday at the Burlington hospital to evaluate a lung condition, but that was delayed, as well.

“It’s just icing on a really awful cake,” she said. “A new cancer diagnosis during COVID is challenging enough. So to get this news? Is this really happening?”

But Kraus said she was trying to focus on the positive: her family’s high-quality health insurance, the care her husband has previously received at UVM Medical Center and the relatively low rate of COVID cases in Vermont.

“Something I’ve learned from 2020 is you just have to take it one day at a time,” she said. “Because who knows what’s coming next week?”

If your work or treatment has been affected by the cyberattack on UVM Health Network, please share your experience with Seven Days by filling out this form.
Prev
Next