The Vermont Department of Health reported 178 new coronavirus infections on Thursday, the most yet in a single day.

Thursday's total, just one week after Thanksgiving, breaks the previous state record of 153 cases set on November 18. New infections had dipped since then but remained higher than at any previous point during the pandemic.

Health Commissioner Mark Levine said the days ahead would reveal whether Thursday's record is related to holiday gatherings.

"If there's going to be a surge of cases post-Thanksgiving, it will begin right around now," he said during a press call with reporters.
Such a surge could strain the state's contact tracing program, which helps limit transmission. The Health Department has been gearing up for higher winter caseloads and can handle about 300 new cases each day, state epidemiologist Patsy Kelso said.

Contact tracing efforts were hampered somewhat over the last two weeks by an error at the University of Vermont Medical Center that caused about 50 cases to go unreported. The hospital received those positive tests between November 22-29 and notified patients, but a software issue stemming from a crippling, monthlong cyberattack meant the cases weren't forwarded to the Health Department, officials said Thursday.

UVM Health Network Cyberattack Interrupts Crucial Treatment for Some Patients
By Colin Flanders
Health Care
State officials noticed the missing data on November 30 and contacted the medical center, Kelso said. It took hospital officials several days to sort it out; contact tracing for those individuals has only just begun.

Sixteen of Thursday's cases are related to the UVM Medical Center flub. The others will appear in forthcoming daily totals.

"It was an error," said Dr. Stephen Leffler, the hospital president and CEO. "We made a mistake, and we're sorry."

Last week, the Health Department disclosed that nearly 250 COVID-19 test samples collected at a November 27 pop-up site in Barre were spoiled because they didn't get shipped in time to a Massachusetts laboratory.

The department has asked those individuals to get tested again. 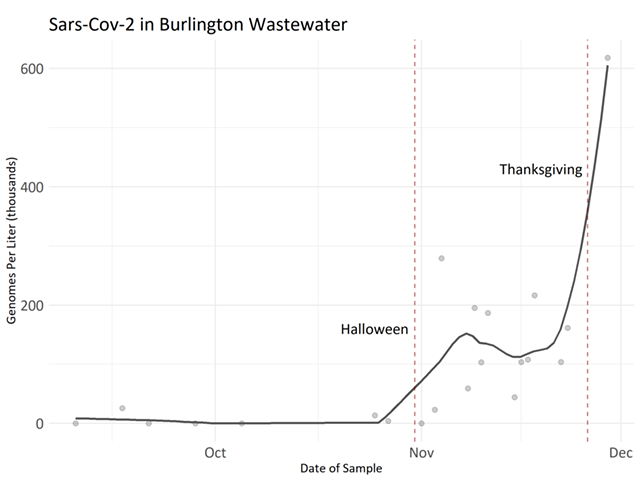 While the readings are preliminary, Mayor Miro Weinberger said the elevated data should serve as a "call to action."

"We need everyone to cease social gatherings outside of your household and to get tested if you have participated in a social gathering over the last week," he said in a press release.

The city also included details on where to get tested:

-405 Pine Street: Free tests every day from noon-8:00 pm through December. More than 250 tests per day. Register on Department of Health website.

-UVM students and staff: UVM will be continuing to offer free weekly testing to all UVM students, faculty, and staff who remain in Burlington during their winter break.