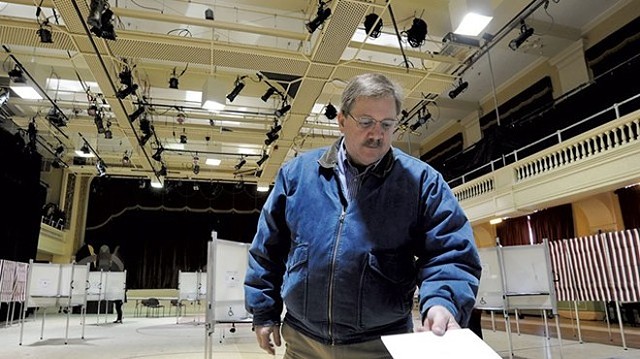 At least 260,142 Vermonters voted prior to Election Day, according to Secretary of State Jim Condos, setting a new state record for early voting.

The pre-election vote count is likely to grow as municipal clerks continue to update the Secretary of State's Office with local totals. Already, the number dwarfs the previous early voting record of 95,203, which was set during the 2016 presidential election.

This year's early vote count works out to 81.2 percent of all ballots cast during the 2016 election — and 51.6 percent of registered voters. According to the Secretary of State's Office, Vermont saw its highest turnout in 2008, when 326,822 people cast ballots.

Condos would not say Monday whether he expected the state to beat that record once all ballots are cast on Tuesday, but he said that the number of competitive races — from president to lieutenant governor to the state legislature — pointed in that direction. "I think, all in all, we're heading for a strong turnout," he said. "But I'm not going to make any predictions."

In response to the coronavirus pandemic, the Secretary of State's Office for the first time mailed ballots to all registered, active voters this fall. As of Monday afternoon, 452,266 Vermonters had received ballots — either through the mail or at their municipal clerk's office.

Vermont residents who have yet to register to vote can still do so on Election Day, and those who did not receive a ballot can obtain one.

Condos recommended that voters bring their own black pen and face mask to the polls, but pens, masks and hand sanitizer will be available.

Because most municipalities have already processed ballots they received early, Condos said he does not expect a delay in the reporting of unofficial results Tuesday evening. Those will be available starting at 7 p.m. on the Secretary of State's website.
Prev
Next