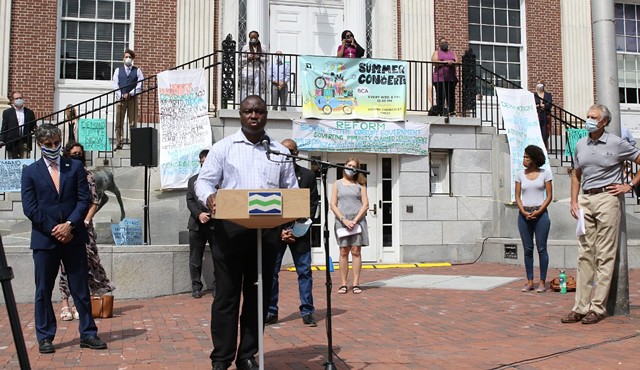 Standing near the newly raised Black Lives Matter flag, the mayor said the city and its partners — which include the Howard Center, Burlington Housing Authority, Champlain College and more — have committed to root out racist practices in their organizations.

"We have with us the broad array of stakeholders necessary to take on the massive challenge of eradicating systemic racism and the profound health disparities that racism creates," Weinberger said. "This work will be difficult and will need sustained focus and energy from our full community to meet the aspiration of being better anti-racist organizations."

The city has pledged to hire a public health equity manager, who will write a plan to address race-based disparities in health outcomes. Officials will also work with the Vermont Racial Justice Alliance to determine how to spend the $1 million racial justice fund created in the latest budget. 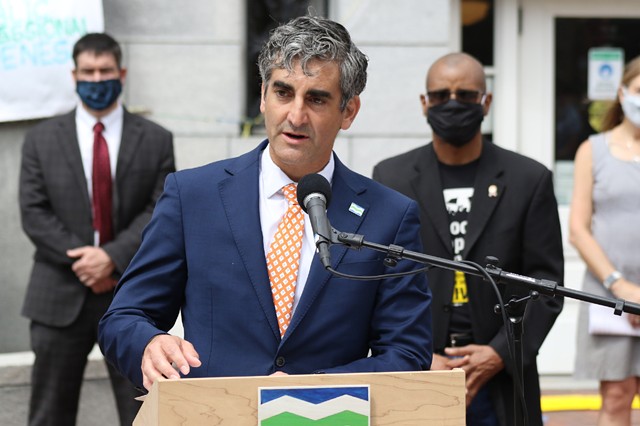 The city will also examine barriers in hiring Black, Indigenous and other people of color. Just 9 percent of the city workforce is nonwhite, according to a 2019 equity report.

Stephen Leffler, president and COO of the University of Vermont Medical Center, said the hospital will begin collecting data to better understand how people of color are affected by illness compared to white people. The hospital will open an anonymous hotline for employees to report racism, and the entire UVM Health Network will survey its employees about experiencing racism at work, Leffler said.

The other partners offered varying approaches. Affordable housing developer Cathedral Square will train all workers in anti-racism and implicit bias. The Champlain Valley Office of Economic Opportunity is hiring a director of racial equity. The Vermont Department of Health will publish data about race, ethnicity and preferred language as part of its contact-tracing protocol during the coronavirus pandemic.

The declaration comes two weeks after a protracted battle over police spending for the city's fiscal year 2021 budget. Led by the Vermont Racial Justice Alliance, activists called into public meetings by the hundreds to demand that the council trim the police budget and fund other social services. Weinberger had proposed no further cuts besides leaving 12 officer positions vacant, but a council majority voted to reduce the city's police force by 30 percent through attrition.

Burlington City Council Votes to Cut Police Force Through Attrition
By Courtney Lamdin
Off Message
City Councilor Zoraya Hightower (P-Ward 1), who sponsored the policing resolution, urged people to reframe their understanding of the Black Lives Matter movement. She said she's heard analogies that compare the focus on bettering Black lives to a firefighter responding to a house that's on fire: All the other houses matter, but the one that's burning down needs attention.

"We don't want to talk about the fact that the house is on fire because someone hates the house and doused it in gasoline, and then threw a match on it," Hightower said. She encouraged allies to see Black people as humans who are burdened by racism. "Our job is not to be saviors but to find areas where you have embedded racism in your institution and to remove it."

Rev. Christopher Von Cockrell, who serves on the Vermont Racial Justice Alliance steering committee, said that as a Mississippi native, he was heartened to see a Vermont city taking steps to address systemic racism instead of just forming committees or conducting surveys.

"I'm glad to see you're finally putting the tire on the road, and you're rolling in the right direction," he said.

Mark Hughes, coordinator of the Vermont Racial Justice Alliance, warned that the declaration is just the beginning in a long fight for equality. The death of George Floyd, and the resulting protests and demonstrations, represent a unique moment, Hughes said. He urged white allies to join the cause. 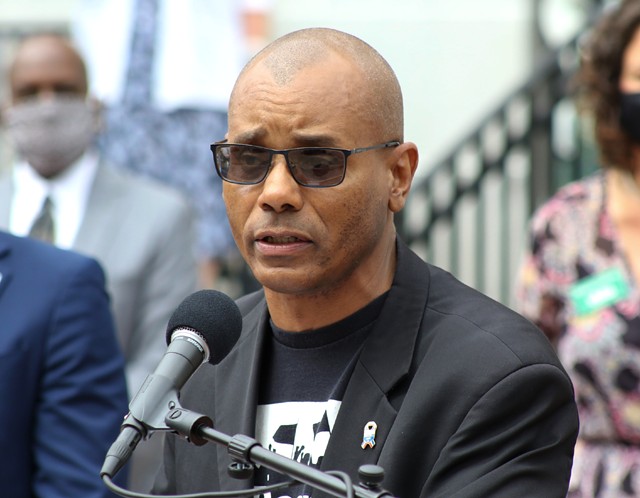 "Do something, because as white people, to do nothing benefits you," he said. "This is an emergency. Get on board."

Weinberger said he wasn't prepared to tackle institutionalized racism when he was first elected but has since grappled with the country's racist roots. In a rare personal appeal, Weinberger said his adoptive Black daughter, Ada, will inspire him to hold himself accountable to the cause.

"I intend to do everything in my power to make Burlington a city where Ada and all Black and brown children enjoy all of the privileges and joys of life that I have in my 50 years," he said to applause. "With this declaration and the coalition that we are launching today, I am confident that that is a commitment that we can make good on together."

"They finally see us," she said.

Read the city's declaration and the partnering organizations' commitments below: