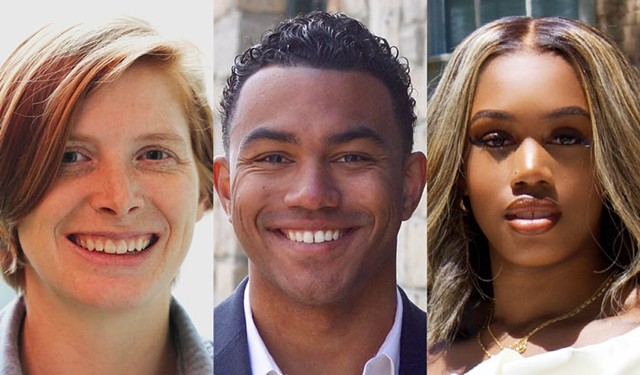 Three of four managers in Burlington's Office of Racial Equity, Inclusion and Belonging are resigning. The news comes less than a month after the city said the department's leader, Tyeastia Green, was leaving her post.

Skyler Nash, Nyla Ruiz and Marielle Matthews will all leave within the next month or so, Green confirmed to Seven Days on Wednesday afternoon. The department's fourth manager, Belan Antensaye, has not resigned.

Nash, a public policy manager, was one of Green's first hires. His last day is March 10, the same as Green. Nash wouldn't say whether his exit is in solidarity with his boss, who reportedly felt unsupported during her two years on the job.

Seven Days could not immediately reach Matthews nor Ruiz for comment. Antensaye is currently on sabbatical in Ethiopia, Green said.

"All of the leaders of that department have resigned," Ram Hinsdale said on the show. "They are going to release more information about the climate that they felt they were a part of, and that they were subjected to, when they leave but have felt like they want to continue to do their work ... without sharing that information publicly."

Reached Wednesday, Ram Hinsdale — who is running for U.S. Congress — suggested to Seven Days that she may have spoken out of turn.

"I was trying to articulate that I think it is something deeper that’s going on, and other people are experiencing feeling unsupported in this department," she said. "But I can’t speak to who is leaving and how they’re characterizing their decision to leave."

Tyeastia Green, Burlington's Racial Equity Director, to Resign
By Courtney Lamdin
Off Message
Green also wouldn't comment about why her staff is leaving. She hasn't spoken publicly about her own resignation since Seven Days broke the news last month. Rather, Green's friends and colleagues, who had spoken with her directly, said Green felt Mayor Miro Weinberger didn't welcome the systemic changes she was trying to make in Burlington. Weinberger has not addressed the allegations, saying instead that Green is leaving "to pursue other opportunities."

Green announced last month that she has a new job as executive director of race and equity in her hometown of Minneapolis, Minn. She posted about the position on Twitter, and thanked her "amazing team of fourteen" staff in Burlington.

"I left it all on the floor and gave my all every single day to set the framework of belonging. Remember, always show up as your authentic selves. No matter what," Green tweeted. "I will miss you, and you have a special place in my heart. #REIBforever."


In a statement Wednesday afternoon, Weinberger said he was grateful for the departing employees' service, noting they've been part of "many critical new initiatives that are now under way."

"I am focused on maintaining that momentum through this REIB leadership transition, and continuing the hard work of eradicating racial injustice in all its forms," he said.

Phet Keomanyvanh, an economic equity analyst in the department, will serve as acting director until the city can name Green's permanent replacement, the mayor said.
Prev
Next