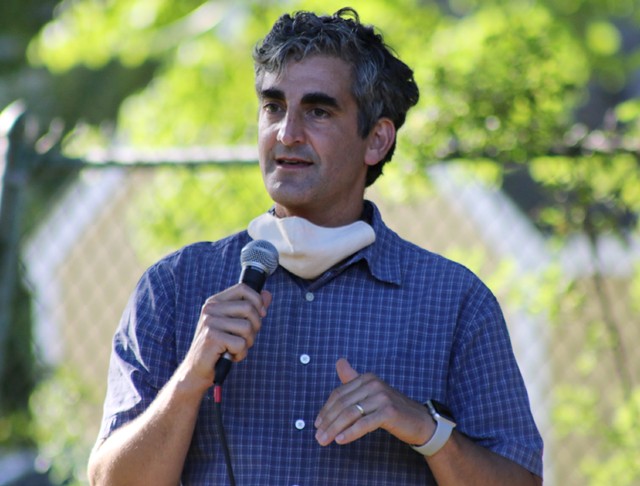 The City of Burlington is applying for a $1.3 million grant to use 20 shipping containers as a 47-bed, low-barrier shelter on Sears Lane, the site of an existing homeless campground.

More than 50 people gathered at Lakeside Park in the city's South End on Wednesday evening to hear about the plan. The new homeless shelter would take the place of the seasonal low-barrier shelter currently on South Winooski Avenue.

Built by South Burlington startup Beta Technologies, the shipping containers would be converted into micro sleeping units and outfitted with running water, electricity, heat and air conditioning. The facility would be managed by ANEW Place, a homeless organization that operated the low-barrier shelter last winter and the temporary shelter at Burlington's North Beach during the height of the coronavirus pandemic.

"It's kind of outside the box," ANEW Place executive director Kevin Pounds said. "Basically, like taking the tiny home concept and applying it to a homeless shelter."

Some of Vermont's CARES Act dollars specifically earmarked to address homelessness would help pay for the project. The city expects to hear back from the Vermont Housing & Conservation Board, the nonprofit chosen by the state to dispense the money, by early August.

If the funding comes through, the city hopes to erect the site before winter, "when we may well be facing a rise in coronavirus infections again and really need a facility like this," Mayor Miro Weinberger said.

The shelter would be built on city-owned land near the Sears Lane homeless campground, a site that has elicited concerns over drug use and violence in the past. The city dismantled the campground in November 2017, but the site is still used.

The shelter proposal drew mixed reactions from the crowd Wednesday night. One concerned citizen, who declined to provide her name, said the homeless people who live there now are disruptive to the neighborhood.

"We hear gunshots. We hear them threatening to kill each other. We hear generators running all night," she said. "I know they're not sober. They've gotta be on some kind of drugs. Who is gonna pay for all of this stuff?"

In response, another meeting attendee suggested that a structured homeless facility may actually address some of those concerns.

"If it was managed, you might feel safer," the man said.

In a subsequent interview with Seven Days, the woman said she was angry that the homeless would be given free housing when she has to work and pay taxes. A man who attended the meeting with her, who also wouldn't identify himself, shared a similar sentiment.

"It's just scary, and they're dirty and disgusting," he said.

Chelsea Jewell, who lives on Conger Avenue, said she's never heard gunshots coming from the campground and said she feels safe walking by the site. She thinks the shipping container plan could be a good solution for homeless people who are seeking shelter. At the very least, Jewell said, the facility would look a lot nicer than the current campground.

"We can decorate them with cool art," she said.

Some attendees questioned why the meeting's organizer — City Councilor Joan Shannon (D-South District) — didn't invite people who live in the camp to the meeting, as they would arguably be the most affected if the proposal were approved. Shannon said the city will host another meeting next week with the campers. 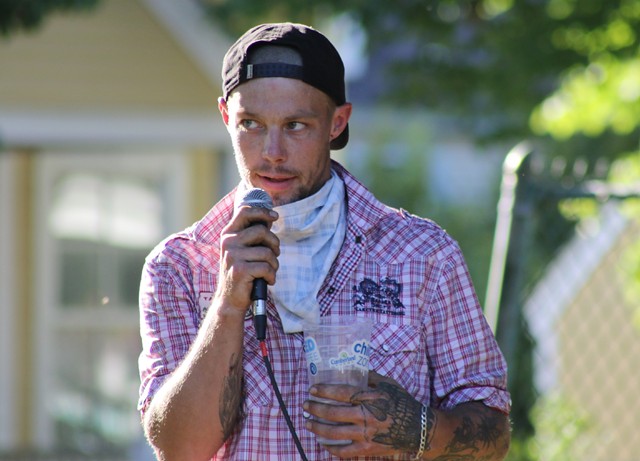 But Bobby Sweeney decided to make his voice heard Wednesday night. Sweeney said he's been camping since last fall and is now staying at the Sears Lane site. He said people are too afraid to approach the campers and ask what sort of help and support they need.

"Any one of y'all is welcome to come over and say hi," he said. "It might look confusing and might look scary, but you'd probably come find the nicest, most generous, not-having-anything people you've ever met."

Homeless advocate Stephen Marshall said he thinks the shipping container plan is "being shoved down the throat of the homeless community ... rather than trying to solve the problems in that camp."

Marshall said he's asked the city for years to allow homeless folks to register as residents of a camp, which would be serviced with basic needs such as a dumpster and porta-potties, as well as visited by social workers. He said the city should have gathered feedback from the homeless community before proposing its latest plan.

"The mayor has not shown the heart to actually listen to members of his constituency at the bottom of the economic ladder," Marshall said. "He's showing up as a developer saying, 'This is the solution, because this way we get to build stuff.' We don't need to build stuff. We need to build community."

For his part, Weinberger said the city has needed a professionally managed, year-round, low-barrier shelter for years, and the city may finally have the money to make it happen.

"It would be very hard to pull together $1 million for this kind of project under normal circumstances," he said. "This seemed to us a rare opportunity, and that's why we've been moving forward quickly."
Prev
Next