Democratic candidates for lieutenant governor drew battle lines at a heated debate on Thursday, attacking their opponents as they sought to portray themselves as the leader best equipped to lead Vermont through the coronavirus pandemic.

The event, aired on Vermont Public Radio, was the second of four statewide primary election debates hosted by the station and Vermont PBS.

Similar to Tuesday's debate among Republicans, candidates were given time to interrogate their opponents. But in contrast to some of the softballs lobbed by their GOP counterparts, the four Democrats showed up with a bag of grenades.

Emerging from the rubble with the most airtime were assistant attorney general Molly Gray and Senate President Pro Tempore Tim Ashe (D/P-Chittenden), who, whether directly or indirectly, were the subject of all eight of the field's questions.

In Debate, GOP Lieutenant Gov. Candidates Take Aim at Milne
By Colin Flanders
Off Message
Ashe kicked off the segment by comparing his and Gray's political experience.

"I have served on a city council; you have not. I have been elected by Vermonters to the Senate to use my judgment to advance the best interest of the state; you have not," he said, repeating the refrain two more times as he listed other accomplishments. "Why do you believe someone with no experience in any of the areas I just described, who has never held elected office, is qualified to be a heartbeat away from the governor's office?"

Gray responded that Vermonters will "see the same outcomes" if they continue to "elect the same leaders."

Gray was back on the defensive a few minutes later when another candidate, Sen. Debbie Ingram (D-Chittenden), asked her why she believes her 15 months living in Switzerland does not violate Vermont's constitutional requirement that candidates for the office must have resided in the state for the previous four years.

Gray's residency status was the subject of a VTDigger.org story last week  that revealed she had sought legal advice to confirm that her time conducting human rights work abroad in 2017 and 2018 did not disqualify her from running for the office.
[image-5] Seeming to expect the question, Gray had a ready answer. "I'm both eligible and I'm qualified," she said. "I was born on a farm in Vermont. I'm a fourth-generation Vermonter. I went to middle school, elementary school, high school, college, law school in Vermont. I lived and worked across our state, and I have maintained my residency since 2011, when I moved back home to Vermont to serve our state."

"I think Vermonters in this moment want to talk about how my experience and my qualifications will lead us through this crisis," she added.

When Ingram requested a more direct answer, Gray compared her situation to members of the National Guard who live overseas. "We don't take away someone's residency just because I've spent time serving human rights or serving our state overseas," she said. "I wouldn't be running if I wasn't eligible."

Later, candidate Brenda Siegel asked Gray to explain why, given her strong support for paid family leave, she has been missing in recent legislative fights.

"I myself have sacrificed, as have my other opponents, and have had those tough conversations, been inside the legislature, fighting for those issues, standing at press conferences, writing op-eds, for years and years now," said Siegel. She's a  longtime policy advocate who ran for governor in 2018, placing third in the Democratic primary.

"Where were you when we were doing that work?" she asked.

Gray listed off her résumé, which includes stints working for U.S. Rep. Peter Welch (D-Vt.) and her current role as a prosecutor in the Attorney General's Office. Then she struck a more personal note.

"Last year, I used up all my vacation days and sick days caring for a mother who was in the hospital," she said. "I was at the point where I was going to have to choose between leaving my job, potentially, to take care of my mother, or stay in my job and hope for the best. No family in 2020 should have to choose between between caring for family and paying the bills."

Siegel wasn't satisfied. She commended Gray's professional experience but said it was not until Gray needed family leave herself that she began fighting for it.

"There are families like mine that all across the state have been struggling for so many years just to feed our families," Siegel said. "What I'm wondering is, where was your voice lifting us up?" 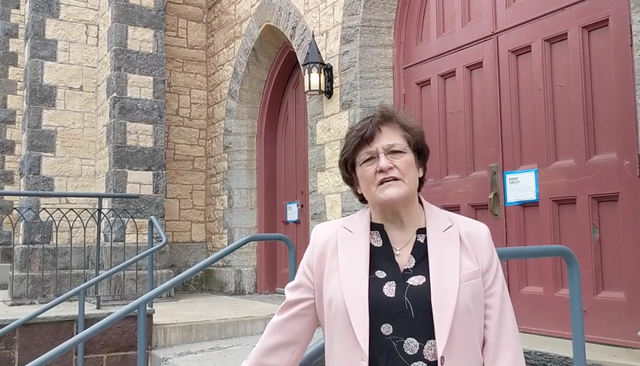 Gray said she would focus on elevating rural communities, working families and "voices like yours, Brenda."

When she wasn't in the hot seat, Gray set her sights on Ashe and tried to chip away at the Senate president's legislative record. In an indirect attempt to implicate him in the Vermont State Colleges System's current financial crisis, Gray asked Ingram whether she agreed that blame for Vermont's historically low support for public higher ed lies with the chamber's leadership.

Ingram didn't take the bait. She said that while the Senate has long heard the state does not support the system enough, it is the legislature as a whole that bears the blame.

Gray came directly at Ashe with her second question.

"Tim, you twice voted against strengthening vaccine requirements for Vermont's children," Gray said. "You suggested increased requirements would 'not have an impact.' In light of this global pandemic, and the need for a COVID-19 vaccination to protect our children and allow our businesses to reopen, has your position changed?"

"That's a funny question to be asking, Molly," Ashe responded. "I'm sure that the consultants who encouraged you to do so didn't quite do their homework."

At question were comments Ashe has made about proposals to remove philosophical exemptions from mandatory school vaccine requirements, a move the legislature took in 2015. Voting against one such proposal three years earlier, Ashe said he believed parents would simply pivot to claim a religious exemption, which is still allowed under Vermont law to this day.

“They don’t check the weekly attendance rolls at the church,” Ashe said at the time. “So the question is, what impact will the change that went through the Senate have? In my opinion, it will not have an impact.”

He added: “I would like to see people get kids immunized, but if we’re going to have any exemptions at all, we should not force people into white lies.”

Eight years later, Ashe said his position hasn't changed. "I believe that all children should be vaccinated," he said, though he added that he supports exemptions for children who have a justifiable medical reason.

Tensions between Gray and Ashe spilled over during the segment's final exchange — one that will likely be scrutinized in the final few weeks left before the August 11 primary.

Rounding out the segment, Ashe asked Gray to name a single bill he has voted for that she would have voted against.

Gray initially sidestepped the question and said she has no desire to "analyze every single bill" he has opposed. "What I know from talking to Vermonters across the state is that the legislature has left them behind, and we've continued to put politics before people," she said.

When Ashe pressed for an answer, Gray said that she does not plan to "play political games." But moments later, she took aim, listing among her reasons for seeking office Ashe's "failed record on paid family leave."

The Senate has passed paid family leave legislation under Ashe's leadership twice. But Gov. Phil Scott has successfully vetoed the plan each time — most recently this session. Pointing this out, Ashe noted that it was the House, not the Senate, that failed to override the veto pen — and by a single vote.

"I'm just wondering why you didn't choose to run for the House for your first elected office," Ashe said, "where flipping one vote would have the effect of making it possible to pass over the governor's veto."

"The issues of paid family leave and childcare?" she said. "Those aren't issues at the city council in Burlington. Those are statewide issues."

Gray was less firm on another statewide issue: whether Vermonters should be mandated to wear facial coverings amid the coronavirus pandemic.

When VPR moderator Jane Lindholm asked candidates where they stand on the issue, Ashe and Siegel said they strongly support a mandate. Ingram said she does, too, but only after recently changing her mind.

Gray, meantime, gave no definitive answer. "I trust scientists and medical professionals and will say that we're all on the same team as Vermonters," she said. "I've seen people wearing their masks, and I think we need to encourage and promote that as much as possible."

Gray’s comments sounded strikingly similar to those of Scott, a Republican, who has caught flak from Democrats for his resistance to issuing a statewide mandate.

Asked to clarify Gray's stance after the debate, her campaign manager, Samantha Sheehan, told Seven Days that Gray supports a mandate. "Her point was to follow the guidance of health experts and scientists, unlike White House leadership," Sheehan wrote in a text message.