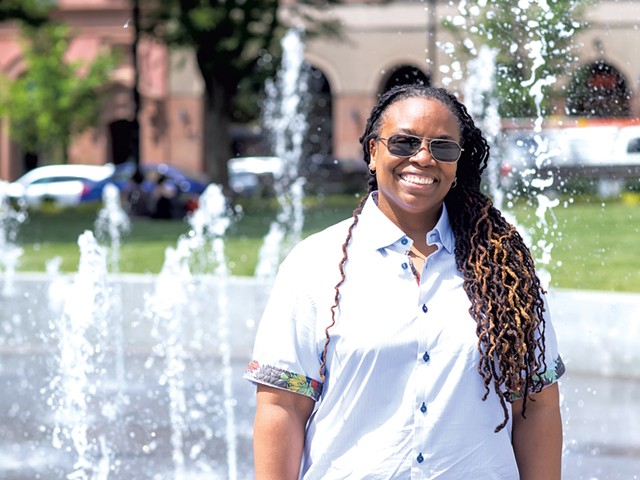 Tyeastia Green, the City of Burlington’s first-ever director of racial equity, inclusion and belonging, is resigning after nearly two years on the job.

In a statement Tuesday, Mayor Miro Weinberger said Green is leaving the city next month to “pursue other opportunities.” Green wouldn't comment on her departure, but several people who spoke to her about the decision did — and said Green is leaving because she feels unsupported in her role. Her last day is March 10.

“There were conversations that made her feel truly unwelcome and that made it clear the systemic change she was trying to bring was unwelcome,” said Sen. Kesha Ram Hinsdale (D-Chittenden), a friend of Green’s. “I frankly don't know how she stayed this long.”

“Everything that she’s tried to do since Juneteenth has been a battle, has been a fight,” Tracy said. “For people who declared racism a public health emergency, it seems like they've done everything they can to stall progress on racial justice.”

Seven Days planned to ask the mayor specific questions about Green's tenure, including the incidents mentioned by Tracy and Ram Hinsdale, during an interview scheduled for 3 p.m. Tuesday. But Weinberger's office canceled the interview and later sent a press release about Green's impending departure.

“Tyeastia has been a tireless, fearless leader throughout her time in Burlington and I will greatly miss having her perspective and candor on the City’s Leadership Team,” the mayor wrote. “Racial equity work is challenging and it will be even harder without Tyeastia here.”

Green came to Burlington in April 2020 from her home state of Minnesota. Her role in Burlington was to eradicate systemic racism — no small task given that Green ran her fledgling department solo until November of that year, when she hired two public policy analysts. The Office of Racial Equity, Inclusion and Belonging now has 14 staffers. Green is one of two Black department heads.

After Green's hiring, Weinberger praised her dedication to anti-racist work and said her hiring “represents a milestone in the City’s decades of efforts to advance equity.”

But the relationship hit the rocks in March 2021. Shortly after being reelected to a third mayoral term, Weinberger removed Green from overseeing a major study on policing and replaced her with Darren Springer, the general manager of the city’s electric utility, who is white.

Weinberger Removes Racial Equity Director From Oversight of Policing Study
By Sasha Goldstein
Off Message
Weinberger implied at the time that Green had not been “neutral” in discussions about police staffing — a divisive debate sparked by a June 2020 council vote to reduce the force by 30 percent through attrition. After intensive community backlash, he reversed his decision and put Green back on the police study.

Ram Hinsdale was a vocal critic at the time, and penned a commentary on VTDigger.org condemning Weinberger’s decision as harmful not only to Green but to the city’s anti-racist movement. Ram Hinsdale, the first woman of color to serve in the Vermont Senate, worked on Weinberger’s transition team when he was first elected in 2012.

'I Made a Mistake': Weinberger to Allow Racial Equity Director to Oversee Police Study
By Sasha Goldstein
Off Message
She’s since befriended Green, and was among the few people outside of city government to learn of Green’s resignation. In an interview with Seven Days this week, Ram Hinsdale said Green’s exit is a huge loss for Burlington and the state.

“Tyeastia ran a division that 100 percent centered the needs and care of people of color and what they needed from city government,” she said. “In my mind, the mayor would have rather had an agency that was working to make people feel more comfortable … when she was there to make systemic change.”

Tracy, who sits on the council’s Board of Finance with Weinberger, said the mayor threatened to cut positions in Green’s department if voters turn down a proposed 4-cent tax increase on Town Meeting Day. The new revenue would help cover the city’s $7 million budget gap, $1.25 million of which was created by additional hires in Green’s office.

Weinberger backed off after councilors pressed him about the potential cuts, according to Tracy, and promised that all departments would have to find reductions if the ballot item fails. Tracy added that councilors also ensured that Juneteenth stayed under the control of Green's office.

Weinberger Devotes State of the City Speech to Racial Justice Efforts
By Courtney Lamdin
Off Message
In her email, Redell wrote that Tracy “has been fundamentally confused and wrong” about the mayor’s budget proposal from the start, Redell said.


She provided a copy of an email in which Weinberger told Tracy he’s committed to funding the new positions in Green’s department.

She added that Tracy’s claims about Juneteenth were “similarly false.” Weinberger did question whether the city could better manage all of its major festivals, which are headed by separate departments, Redell said. But Weinberger eventually supported Green’s request to hire her own event planners for Juneteenth, she noted.

Tracy, for his part, stood behind his statements. While Redell described open meetings, Tracy said he had heard that Weinberger acted differently behind closed doors.

"This is what I heard directly from sources within the department,” Tracy said.

Tracy said that Weinberger hasn’t lived up to the promises he made in his April 2021 State of the City address, which was entirely focused on racial justice. During the speech, Weinberger apologized to Green for removing her from the policing study and pledged to become “an anti-racist leader who identifies racism and works to dismantle it.”

Instead, Tracy said, Weinberger has stood in the way.

“Everything that [Green] has been trying to do, Miro has been making it much more difficult,” he said, adding that her accomplishments are “in spite of Miro, not because of him.”

Burlington resident C D Mattison supported Weinberger’s last reelection bid, even working as his campaign treasurer. But Mattison has grown disenchanted with Weinberger in the last year, saying that he’s failed to support local businesses and has divided the city by pushing a narrative that Burlington is less safe with fewer cops. She called Green’s resignation the “mic-drop moment” that convinced her Weinberger isn’t the leader Burlington needs.

Mattison said Green led many community efforts beyond the highly visible Juneteenth celebration, including a grant program for businesses and nonprofits owned by Black, Indigenous and people of color. She also helped push for livable wages for seasonal workers, Mattison said.

“We had an [office] led by a Black woman, staffed by a significant number of BIPOC folks that made the city government look more like the city of Burlington,” Mattison said. “With her absence ... we lose that.”
Prev
Next