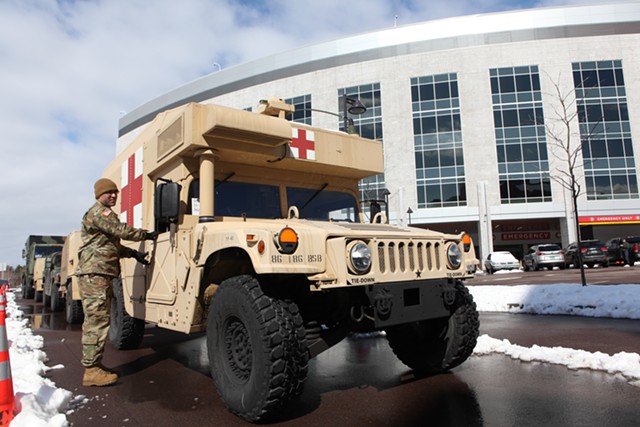 At least three dozen health care workers in Vermont have coronavirus, Seven Days has found, as providers are bracing for a surge in patients whose treatment will depend on a healthy and protected workforce.

The tally includes 22 hospital employees across four counties and 14 infected staffers at Burlington Health & Rehabilitation Center, the nursing home that has been struck by the state’s largest outbreak.

The total is roughly 12 percent of all confirmed COVID-19 cases in Vermont as of Tuesday.

State officials have not released occupational figures publicly or said whether they are tracking them, so Seven Days asked hospitals directly. Of the majority that responded, the University of Vermont Medical Center in Burlington reported the lion’s share of known cases, with 16.

Vermont Announces 37 More Coronavirus Cases, One New Death
By Colin Flanders
Off Message
None of the hospitals would specify how many of infected staffers were involved in patient care. Porter Medical Center, a 45-bed critical access hospital in Middlebury that is part of the UVM Health Network, declined to say whether any of its employees has tested positive for COVID-19.

“We are trying very hard during this challenging time to maintain, to the best of our ability, patient privacy,” vice president for communications and engagement Ron Hallman wrote in an email.

A national shortage of protective equipment such as respirators has caused trepidation among frontline medical workers who are caring for the ill. Thousands of them have become sick in China, Spain and Italy, and the first New York City nurses died last week, according to the New York Times.

More than 400 hospital workers in Boston have tested positive, according to data collected and published by the Boston Globe. New Hampshire’s state epidemiologist has said cases there are increasing beyond the 33 that were reported last week.

At Vermont hospitals, where confirmed and suspected inpatient cases are still below 100, there is little evidence so far that nurses are getting sick at work. Northwestern Medical Center said its two infected employees did not acquire the virus at the hospital. It was “inevitable” that an organization with more than 850 employees would have some cases in its ranks, vice president of community relations Jonathan Billings said.

Scott to Travelers: Self-Isolate for 14 Days
By Courtney Lamdin
Off Message
A UVM Medical Center spokesperson said that some of the hospital’s infected employees were involved in direct patient care, but “the origin of infection is difficult to pin down.”

Besides adding bed space, the hospital has lined up “three to four layers” of backup staff for employees who get sick during a patient surge.

“We currently do have staff who are quarantined at home, either because of a positive COVID result or out of an abundance of caution, so we are using the backup plan in some instances,” spokesperson Annie Mackin wrote in an email.

Shaw's Grocery Worker in Middlebury Diagnosed With COVID-19
By Derek Brouwer
Off Message
There hasn't been a noticeable staffing crunch in the UVM Medical Center's intensive care unit, said intensive care unit nurse Deb Snell, who is also president of the Vermont Federation of Nurses and Health Professionals. But Snell is concerned about what would happen if the hospital’s three- to four-week supply of personal protective equipment, or PPE, dwindles.

Already, her unit is trying to conserve N95 masks by issuing nurses one mask per day. They keep the masks inside paper bags, which are then collected overnight for possible reuse, should sterilization technology become available in the coming weeks.

Snell said her members also want to be sure that training is available for employees who are asked to take on new roles as the crisis unfolds.

“People are probably going to be asked to step outside their comfort zone and lend a hand in an area they’ve never worked before,” Snell said by phone as she shopped for groceries between shifts. “They need to have proper training in dealing with that patient population and PPE.”

The union has circulated a petition asking the hospital and the University of Vermont to open campus parking lots to employees so they don’t need to ride shuttles to the hospital. The petition also seeks to open UVM dorms, which are empty, for use by health care workers who want to limit their family members’ potential exposure.

Some nurses have already moved out of their homes, UVM Medical Center emergency department nurse manager Kristin Baker said during a March 31 interview on NBC News.

“I think for my employees, the biggest fear is bringing something home to their families,” she said. “They’re scared to death of being that vector.”
Prev
Next