Contamination From Vermont National Guard Base Is Reaching the Winooski River 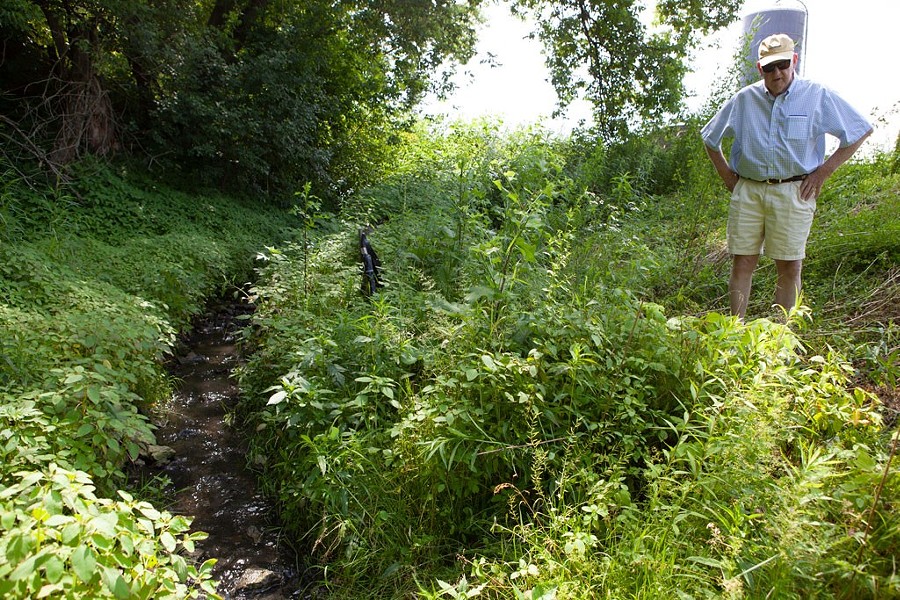 Toxic chemicals from the Vermont Air National Guard base in South Burlington have not only polluted nearby wells but are reaching the Winooski River and its tributaries.

That’s the takeaway of a new report on just how extensively the contamination has spread beyond the base, according to state officials.

“It’s a large plume. In some places, it’s probably over a mile long,” said Richard Spiese, a hazardous site manager with the state Department of Environmental Conservation. “And it goes from the source area all the way to the Winooski River.”

Multiple tributaries running from the base — located on the north side of the Burlington International Airport runway — are contaminated with PFAS, the same perfluorinated chemicals used to make products such as Teflon cookware and waterproof clothing. The chemicals, which were discovered in 2016 in wells around the former ChemFab factory in North Bennington, were also used in firefighting foam on the base and at airports around the nation.

Their durability has earned PFAS the moniker "forever chemicals," and communities, airports and municipal water systems are spending billions to understand and clean up the contamination.

Last year, Seven Days reported how PFAS chemicals have contaminated a well at the Belter dairy farm just north of the base. The well had been used by John Belter’s family to water his 400 cows for decades, and after the discovery, the state paid for a filtration system.

But additional testing was needed to better understand the extent of the contamination, including in creeks and rivers. Now that report – a 991-page volume released by the Air Guard recently — clearly shows that the chemicals have migrated off the base and into groundwater, creeks and the Winooski itself, Spiese said.

Proving the base is the source of the contamination may take additional time, but the connection it makes is very strong, he said.

“I think the data is there to show that PFAS from the base is what is impacting the Belter well,” Spiese said.

Belter was not immediately available for comment on Tuesday.

Spiese noted that the Guard has been cooperative and has been performing the costly, detailed studies needed.

The report, by the Virginia-based engineering firm Parsons, states that the “data indicates an exposure pathway exists” between the base and the river. Regarding the well, however, the report merely states that such a pathway “may be complete.” The report says additional study is needed to confirm that, and other sources may also be responsible.

While he has yet to finish his analysis of the report, Spiese likened that last claim to an obviously guilty defendant pleading not guilty at the start of a legal process process.

“It’s all part of the game, and we’ll get them to admit it one way or another eventually, even if they don’t come out and say it,” he said.

He noted that Saint-Gobain Performance Plastics is spending $60 million to clean up the groundwater contamination around its plant in North Bennington, but it has yet to admit responsibility.


In a press release, the Guard acknowledged the findings and stressed that drinking water in the area is safe, noting the businesses and homes are served by the Champlain Water District, whose water supply has not been affected.


"This has been a very thorough process to determine potential impacts from the use of PFAS on our base, and I am encouraged that we can now move toward the next phase of this critically important work." said Col. Adam Rice, 158th Fighter Wing vice commander. "We take this issue very seriously and want to reassure our employees and the community that drinking water has not been impacted, and there is no threat to human health."

Spiese agrees that human health is not immediately at risk unless someone were to catch and eat fish from the small tributaries most affected, which he notes is unlikely.

Once the contaminated water reaches the Winooski, however, it is quickly diluted. Tests in the Winooski downstream from the tributaries of concern showed levels below 10 parts per trillion, just slightly higher than the levels detected in the river above the base.

Spiese said he was “relieved” that numbers in the Winooski itself are so low, and he doubts that the state will respond by issuing an order not to eat fish from the river. That remains an option, however.

More study is needed to come up with a remediation plan, a process that could take years. The base already operates a trench system that captures some of the water running off the most contaminated area, pumps it back uphill and treats it.

That location — which has produced water samples nearing 50,000 parts per trillion, or 2,500 times the state standard  — is where firefighters for decades set all manner of things ablaze and practiced putting them out with the PFAS-laden foam. The base has since switched to a less toxic foam.

Future cleanup could involve removing and disposing the most contaminated soil. Contaminated soil can also sometimes be kept in place by installing underground curtains and capping the area to keep water from leaching through. Other technologies might be able to bind the contamination to the soil so it doesn’t seep out, Spiese said.

“It will be challenging; it will be very expensive. But that’s not to say it’s impossible,” he said.
Prev
Next