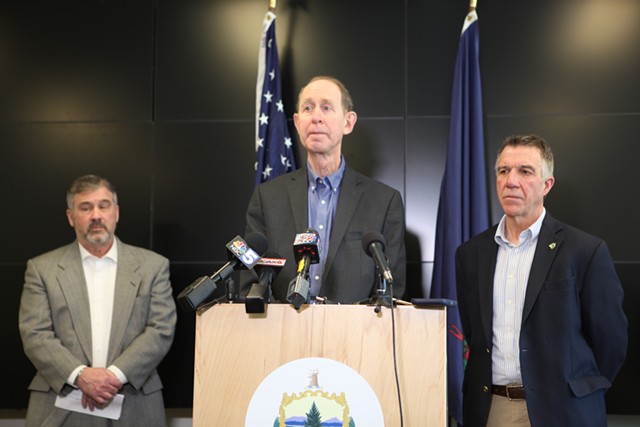 The state had previously reported cases at three senior facilities: the Burlington Health & Rehabilitation Center, where eight residents have died; Pinecrest at Essex in Essex Junction, a senior apartment complex where two residents and an employee's significant other have died; and the Residence at Quarry Hill in South Burlington, where a resident tested positive.

In naming five other facilities with infections on Wednesday, Levine did not specify whether the cases were among staff, patients or residents, nor did he comment on the cases' severity or how widespread they were in those facilities.

A UVM Health Network spokesperson later clarified that four staffers who "make patient visits in the community" have tested positive, as have two patients the organization treats. No one has been infected at the organization's senior facility, the McClure Miller Respite House in Colchester, Annie Mackin said in an email Wednesday evening.

The other two facilities Levine named were the Lancaster at O'Brien Farm condos in South Burlington and Shelburne House in Williston, an in-patient facility that provides intensive behavioral therapy for young people.

Related 'It's Real': A Franklin County Teacher Recounts Her Battle With Coronavirus

'It's Real': A Franklin County Teacher Recounts Her Battle With Coronavirus
By Courtney Lamdin
Coronavirus
"None of them should merit a scarlet letter," Levine said. "This is really something we're gonna see more and more, not only in Vermont but across the nation."


The state is also now testing every patient and staff member at Burlington Health & Rehab — a shift from the strategy Levine announced just two weeks ago. On March 20, Levine said testing everyone at the Pearl Street center would be ineffective unless they all showed coronavirus symptoms.

On Wednesday, Levine said he supported that protocol “at the very inception of the outbreak” but changed course as cases there continued to grow. The state began widespread testing “as we speak,” Levine said at a press conference Wednesday, to ensure that the virus doesn't spread within the facility.

At Least Three Dozen Vermont Health Care Workers Have Coronavirus
By Derek Brouwer
Off Message
To date, 22 Burlington Health & Rehab residents have tested positive. Eight have died and eight have recovered, a spokesperson for Genesis HealthCare, the company that operates the facility, said. Fourteen staffers have also contracted COVID-19.

“We continue to follow to the letter the direction of the Vermont Department of Health in an effort to contain and minimize the spread of the virus,” Genesis said in a statement. “We are also adhering to Centers for Disease Control and Prevention (CDC) and Centers for Medicare and Medicaid Services (CMS) guidelines and recommended protocols.”

Levine said the state likely won’t expand testing in the other facilities because the virus won’t spread as quickly in complexes with individual apartments as it did in the nursing home.

“It all depends on how that environment is structured: Are there abundant opportunities for people to have been in contact with one another," Levine said, “or is it a very, very large building … where there's no major congregating area?

“That would make it less likely that testing an entire building like that would be feasible or actually helpful, from a public health standpoint,” he continued.
Derek Brouwer contributed reporting.
Prev
Next