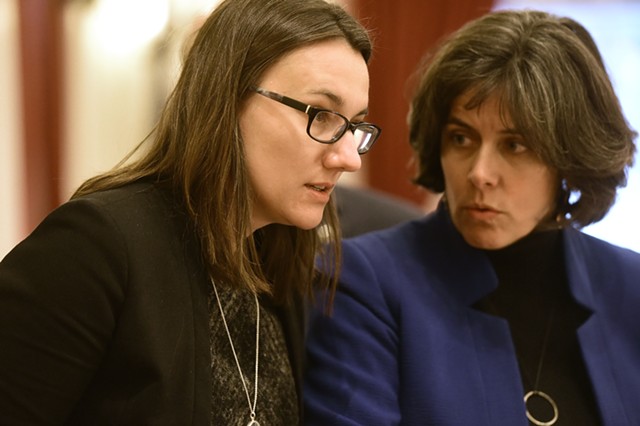 The Vermont Senate on Thursday voted 24-6 to override Gov. Phil Scott’s veto of a two-year increase to the state’s minimum wage.

All eyes now turn to the House, where Democratic leaders fresh off their failure to force paid leave legislation into law must prepare for another high-stakes vote.

House Majority Leader Jill Krowinski (D-Burlington) said Democratic leaders have begun working on a vote count and plan to check in with every member of their caucus. That includes the eight moderate Democrats who voted against the minimum wage hike the first time around.

"Some people are hearing and feeling pressure from their constituents, so we are in constant conversations with them to see where they're at," Krowinski said.

House and Senate lawmakers paint the measure as a compromise from past proposals to raise the minimum wage to $15 per hour. But Scott, arguing the increase would raise the cost of goods, harm economic growth and disproportionately affect rural areas, vetoed the measure on Monday.

Lawmakers Fall One Vote Shy of Overriding Paid Family Leave Veto
By Kevin McCallum
Off Message
The Senate's successful vote was expected because it had passed the bill last month with the two-thirds majority necessary for an override. But in the 150-member House, where a two-thirds majority is also needed, leaders only managed to secure 93 votes the first time around — suggesting another close tally may be on the horizon.

Scott acknowledged as much during his weekly press conference Thursday, saying he believes that the paid leave outcome will spur efforts to override his veto on minimum wage.

“Politics will take place,” he said. "For those who voted against increasing the minimum wage on the other side of the aisle, I'm sure there's incredible pressure on them to override the veto ... regardless of how their constituents might feel about it."

Krowinski said that the potential flip votes in play this time around are different than those from the paid leave override attempt.

Democrats who initially opposed the minimum wage bill must now decide whether to allow Scott to again strike down a top party priority. Last week's debacle appears to be weighing heavily on some of their minds.

"It does change the calculus for me," said Rep. John Gannon (D-Wilmington), who opposed the measure over concerns that it would negatively impact rural businesses. "I feel bad for what happened personally, as a Democrat and a member of the House caucus."

Gannon had previously said he would be unlikely to flip even if Scott vetoed the measure. He was less firm on Thursday. "I'm open to having discussions with leadership. I know it's a challenging vote for them. [We'll] see what we can work out," he said.

Rep. Charles Kimbell (D-Woodstock) was also keeping an open mind. He said he initially voted against the measure because he doesn't believe that it would raise the state's average annual income.

Scott Vetoes Minimum Wage Increase, Setting Up Another Possible Override Vote
minimum wage, Gov. Phil Scott, veto, override
By Kevin McCallum
Off Message
"But whether or not I choose to go and override the veto is a different decision. I haven't made that yet," he said. As for why he views the votes differently, he said, "This is a team sport."

Others who have opposed the bill were less forthcoming.

"I have the same concerns that I've had all along, but I'm still listening and learning," said Rep. Lucy Rogers (D-Waterville), declining further comment.

Rep. Cynthia Browning (D-Arlington), who opposed the bill over concerns that it would have unintended consequences on low-wage earners, confirmed that she plans to vote no again. She said no one from House leadership had tried to convince her otherwise.

“They generally know where I stand because I tell them," Browning said. "It would be hard to think I would change my mind."

House leaders have not scheduled a vote, Krowinski said. The timing will depend on both when lawmakers are available and when leadership believes it has the votes, she said.

The House is constitutionally bound to hold a vote at some point, however, even if the leadership knows it won't succeed. And while there's still roughly three months left in the session, failing to pass the second of the Democratic party's two signature economic priorities would be a devastating blow, particularly after lawmakers failed to reach a compromise on the measures last session.

Asked whether ending the session with neither bill becoming law would be a failure, Krowinski wouldn't bite.

"You're asking me to predict the future," she said. "My job right now is to make sure that our members have everything they need for this vote."
Prev
Next