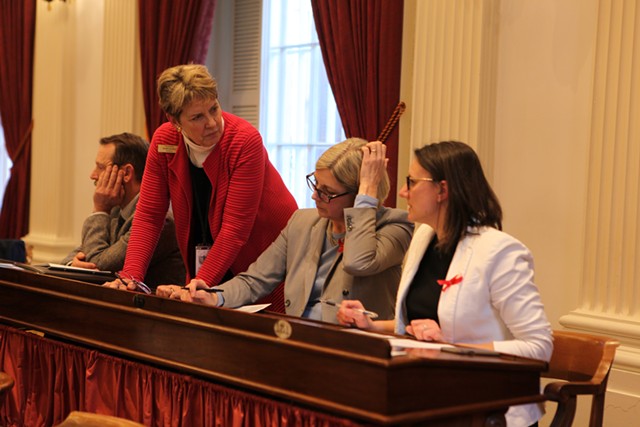 Democratic lawmakers feuded this week over their failure to override the governor’s veto on the paid family and medical leave bill Wednesday, with party leaders saying they were betrayed and the alleged turncoat denying she ever pledged support.

The finger-pointing reflected how painful it has been for many lawmakers to watch their signature legislative priority — one that some have pushed for a decade — fall just one vote shy of success.

The full 150-member House needed 100 votes to override Republican Gov. Phil Scott’s long-promised veto of H.107, but a coalition of Democrats and Progressives could only muster 99 votes in favor.

In the hours and days following the high-profile defeat, House members first expressed disappointment and commitment to keep fighting, but later began characterizing it as a betrayal.

“I believe a trust was broken,” said bill sponsor Rep. Robin Scheu (D-Middlebury), though she said she wasn’t directly involved the vote-counting conversations. Rep. Tom Stevens (D-Waterbury) said a House member had “reneged” on a “hard, stated commitment” to support the override.

Majority Leader Jill Krowinski (D-Burlington) said alarms began going off shortly before the vote when a member who had pledged support the previous week was spotted in the Statehouse conferring with members of the Scott administration.

Krowinski didn’t name the member, who she said had previously “indicated that they were a ‘yes’ and were going to help out with having conversations with other people.”

Rep. Linda Joy Sullivan (D-Dorset) acknowledged she was the member whose vote leaders took issue with.

On the morning of the vote, leadership learned the governor had been “pulling people in” for meetings about it, Krowinski said.

Scott acknowledged administration officials had meetings with two House members shortly before the vote, as well as side meetings with members to answer questions and urge them not to support the override.

Concerned about that outreach effort, House Speaker Mitzi Johnson (D-South Hero) checked in with Sullivan that morning, and learned she wasn’t sure how she was going to vote.

Johnson said she arranged to get Sullivan the answers to her outstanding questions even as she was working to see if she could convince Rep. Laura Sibilia (I-Dover) to support the override.

Both efforts failed. Party leaders blamed Sullivan for not keeping them in the loop about her change of heart.

Some Democrats in the House, such as Rep. Cynthia Browning (D-Arlington), don’t always support bills that leadership wishes they would, Johnson said. But Browning has “honesty and integrity” and lets leadership know her concerns up front, she said.

She did not have similar praise for Sullivan.

“Rep. Sullivan is smart enough and engaged enough and has been around long enough to know the protocol is that if you are not on board with the main plan, it’s on you to be clear to leadership about that,” Johnson said.

Rep. Emily Long (D-Newfane), the House whip, is responsible for making sure House leaders know who plans to vote how on bills, and why.

“It’s not about the decision,” Long said. “It’s about the communication, or lack thereof.”

Sullivan had been widely seen as one of the swing votes. She was one of a group of conservative Democrats from southwestern Vermont who voted against the original House bill last year as well as the compromise bill struck with the Senate early this session.

Sullivan conferred at length with staff from the legislative counsel’s office in the House chamber just before the override vote. She denied she had ever committed to “flip” and vote for the override.

“I can understand Leadership’s need to mischaracterize their folly,” Sullivan wrote in an email. “While I appreciate the miscommunication from the Majority Leader to the Speaker, I never committed to anyone on how I was going to vote.”

Sullivan said the last time she spoke to anyone in leadership about her vote was at a Democratic event in Bennington County on January 26 when Krowinski, “under a social setting with a glass of wine, asked me if I was getting the answers to my unanswered questions.

“I told her that I was,” Sullivan wrote, adding she was continuing to ask questions. “There was no further conversation about the veto vote until approximately an hour or so before the floor on vote day."

In her comments on the House floor, Sullivan said she was “unequivocally and without reservation” in support of a paid family leave plan in Vermont. But she said the “two competing and irreconcilable plans” proposed by the legislature and the governor convinced her a compromise between the two plans was possible and should be further pursued.

Sullivan’s written explanation of her vote, however, differed from her verbal one, and fueled questions about her grasp of the paid leave policy. Those written comments express concern that “we are committing to spend another $30 [million] to $60 million in General Fund dollars to set up this plan.”

The $29 million program would be funded by payroll taxes, not general fund dollars. Sullivan said the written comments were in error, and she meant to write that she had concerns the plan could result in a $3 million to $6 million impact on the general fund.

By the time Sullivan’s concerns were clear, Johnson said, there was no way to delay the vote.

Johnson had informed Republican leadership about the timing of the vote, and House members had gone to great lengths to be there. Members had delayed travel plans and reported to the Statehouse after surgeries, she said.

“There had been a lot of push to take the vote,” Johnson said. “I think we were very much on this train.”

Correction, February 8, 2020: This post has been updated to clarify Sullivan's statement acknowledging that she was the legislator whom leaders blamed, and it was also corrected to give her correct hometown.
Prev
Next