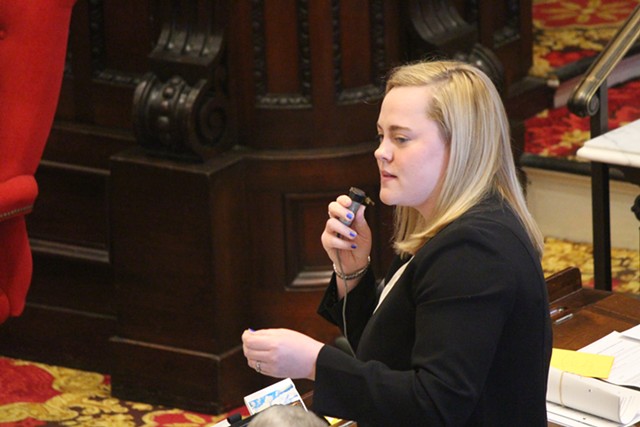 The Vermont House on Friday voted to increase the state's minimum wage twice in the next two years.

The compromise measure, reached in negotiations this week with the Senate, falls far short of Democratic and Progressive goals to raise the wage to $15 an hour. Instead, it would hike the current rate of $10.96 to $11.75 in 2021 and to $12.55 in 2022. In subsequent years, it would again be tied to inflation.

The 93 to 54 vote also falls short of the two-thirds majority necessary to override a potential veto from Republican Gov. Phil Scott. Among those voting no were eight Democrats and four independents.

Friday’s vote marked the second day in a row that House leaders failed to reach a veto-proof majority on a key Democratic priority. On Thursday, the House approved a paid family and medical leave bill by a vote of 89 to 58.

The wage bill, S.23, moves to the Senate next week for an up-or-down vote. It would then go to Scott for his signature or veto. The governor previously expressed hesitation over a $15 minimum wage, but he signaled Friday that he might be open to the compromise measure.

“The Governor remains concerned about the economic impacts, particularly along the New Hampshire border and more rural areas,” spokesperson Rebecca Kelley said in a written statement. “He does recognize that the Legislature has come a long way from their initial $15/hour proposal, and he’ll need to take a closer look at the details and latest analysis.”

Legislature Passes Paid Family Leave, but Scott Veto Likely
By Kevin McCallum
Off Message
The minimum wage and paid leave bills have been a focus of Democrats and Progressives throughout this biennium, but the two chambers have not seen eye to eye. Last year, legislative leaders adjourned abruptly after the House and Senate failed to reach an agreement on the details of either. They pledged this year to quickly reach consensus and send the bills to Scott.

During Friday’s debate, some liberals expressed regret that the bill did not go further.

“Increasing the minimum wage has always been a difficult task in this building,” said Rep. Tom Stevens (D-Waterbury), who led House negotiations with the Senate. “We fight for this wage to give these workers a little more money and a little more dignity. We know it is not enough, but anytime we have an opportunity to raise wages for Vermonters, we should embrace it.”

On Thursday, five Progressives opposed the paid leave bill, arguing that it did not go far enough. But on Friday, those same members voted for the minimum wage compromise.

“If there’s one thing I’ve learned being in the legislature, it’s that it does take a lot of little steps to go far,” said Rep. Brian Cina (P/D-Burlington). “And raising the minimum wage is one of those small steps.”

Some moderate Democrats were won over by the compromise. Rep. William Notte (D-Rutland City) opposed last year’s efforts to raise the minimum wage to $15 an hour. But on Friday, he voted yes.

Rep. James Gregoire (R-Fairfield) disagreed. The convenience store owner employs seven people, he said, but can’t afford to give himself a paycheck — so he works two other jobs.

“Even though a lot of money can go through a business, it doesn’t mean a business owner is getting rich,” he said. “We’re not all Steve Jobs. We’re not all Jeff Bezos.”

Rep. Lucy Rogers (D-Waterville) said she worries about those who are unable to earn a livable wage in her rural community and resents employers that fail to do right by their workers. But the Democrat said she could not get behind the minimum wage measure.

“When I vote no on this bill, it’s because I also feel a great amount of fear for the businesses that have stood in my community for generations that have very, very, very small operating margins,” she said.

Corrected at 3:26 p.m.: An earlier version of this story included an inaccurate vote count.
Prev
Next