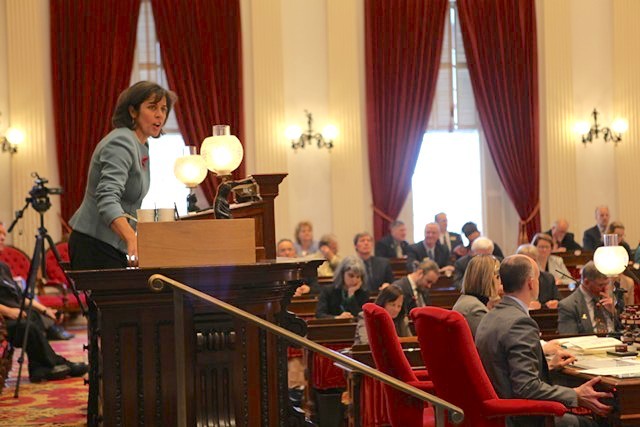 Democratic lawmakers failed to override Gov. Phil Scott's veto of a mandatory
paid family and medical leave program Wednesday, a huge blow to one of their key legislative priorities.

House members voted 99-51 in favor of override, one vote shy of the 100 needed to force the bill — with the expected consent of the Senate — into law.

H.107 received 89 yes votes in the House last month, and leaders sought to whip up 11 additional votes. Some had predicted that enough lawmakers who voted against the bill would come around to support overriding the Republican governor's veto.

"The vote the last time was, 'Is this bill my ideal?' And the vote this time was ... 'Is Vermont better off with this or with nothing?'" a visibly disappointed House Speaker Mitzi Johnson (D-South Hero) said after the vote.

Speculation about whether leadership had lined up the votes was high after five Progressives who voted against the bill last month agreed Tuesday afternoon to support the override.

Rep. Robin Chesnut-Tangerman (P-Middletown Springs), who initially voted no, said he felt it should be passed into law with an eye toward "improving and strengthening it next year."

That left just a few swing votes — three by some calculations — needed to override. Two Democrats who initially voted against the bill, Logan Nicoll (D-Ludlow) and Charen Fegard (D-Berkshire), flipped.

But Rep. Linda Joy Sullivan (D-Dorset) said she could not support one of "two competing irreconcilable plans," a reference to Scott's voluntary leave plan.

"I believe that this plan, and the governor's plan, are both broken" and need to be reconciled, she said.

Another Democrat who stuck by his no vote was Rep. Randall Szott (D/P-Barnard), who pushed back against the idea that lawmakers should strive for incremental change by passing a compromise bill and working to improve it later.

Laura Sibilia (I-Dover), who was absent for the initial debate on the bill Wednesday, cast another key vote against it. She returned to the chamber around the same time as Johnson, just before the final vote, but her position had not changed.

After reaching an impasse on competing versions of the bill last session, House and Senate leaders hammered out a compromise last month. The program would have allowed most workers to take up to 12 weeks of paid leave to bond with a newborn child and eight weeks to care for a sick family member. The $29 million insurance program would have been funded by a payroll tax.

The cost and mandatory nature of the program is what troubled most Republicans, including Rep. Scott Beck (R-St. Johnsbury).

Beck said the question came down to a choice between an optional family leave program such as Scott's, or "to raise a $30 million payroll tax on tax-weary Vermonters. That is the question."

Rep. Robin Scheu (D-Middlebury) countered that the program would help businesses that currently opt to pay employees who take leave. She also said it would help all businesses attract and retain workers.

"It's long past time for us to support working families and help our businesses with a paid family leave program," Scheu said.

House Majority Leader Jill Krowinski (D-Burlington) said the bill was "one of the top issues in our platform" and its defeat did not mean the war was over.