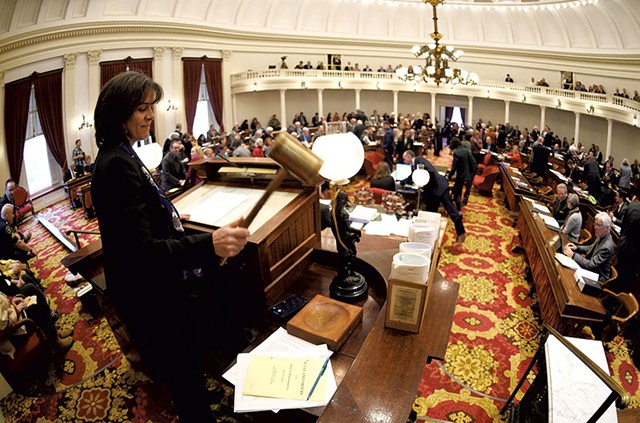 Vermont legislative leaders say they have much to accomplish this session, including modernizing Act 250, reducing vehicle emissions and reforming the state's troubled prison system.

But one thing they don't plan to do is repeat the House-Senate impasse that dashed their hopes last session of enacting two top Democratic priorities: increasing the minimum wage and creating a mandatory paid family and medical leave program.

House Speaker Mitzi Johnson (D-South Hero) and Senate President Pro Tempore Tim Ashe (D/P-Chittenden) said they expect to quickly draft and pass compromise versions of both bills and send them to Gov. Phil Scott in a matter of weeks.

Last spring the two chambers failed to reach a compromise on the size and pace of a minimum wage increase, a top Senate priority, and the scale of a family leave program, a top House priority. Democrats control both chambers of the legislature.

The two sides were very close to a deal in May when Johnson, frustrated by the stalemate, adjourned the House for the year while the Senate was still in session. Many saw the unusual move as a sign of frayed nerves and strained relations between Johnson and Ashe.

Johnson said that despite the media's affinity for rehashing the "juicy leftover drama" that marred the session's end, she and Ashe work well together and are looking forward to a productive 2020 session.

"I think we're in a good place," Johnson said. "We're going to pass bills early and get them to the governor's desk early."

Ashe expressed similar confidence. Given how close the House and Senate came to a grand bargain in May, Ashe said, closing the gap now shouldn't be that tough.

"It's not like we're going in on some brand-new frontier and hitting the start button on a long journey," Ashe said. "We're sort of near the end of the journey."

The current minimum wage is $10.96 per hour. The Senate passed a bill last February that would have increased it to $15 by 2024. The House, concerned about the impact on small businesses, sought instead to tie annual increases to the Consumer Price Index. The Senate's latest counter was a two-year increase, to $11.50 in 2020 and $12.20 in 2021, with Consumer Price Index increases thereafter.

The House's paid leave bill calls for up to 12 weeks of mandatory leave for new parents and eight for workers to care for ill family members or to recover from personal illness or injury. The Senate's final proposal would reduce the benefit by a third, limit the total number of weeks a couple could take to 16 and make the personal injury insurance optional.

The landscape has shifted since last May, however, given the progress that the governor has made toward establishing a voluntary paid family and medical leave program.

Scott, a Republican, has argued that state workers who want such a benefit or employers who want to provide it should be allowed to participate voluntarily in such a program instead of being required to under the $78 million program envisioned by many legislators.

Scott and fellow Republican Gov. Chris Sununu of New Hampshire proposed a "Twin State" program in January 2019 that would provide the benefit to 18,500 state government workers and others who wanted to buy in. The move was meant to create a large enough pool that the cost of participation would drop for those in the private sector.

The program would provide 60 percent of an employee's salary for up to six weeks beginning July 1, 2020, and would cost the state about $2.5 million per year. The administration is exploring how to allow individuals and private employers to buy in to the same coverage, Scott's spokesperson, Rebecca Kelley, said.

A voluntary program could be up and running sooner, would not hike payroll taxes, and would place the risk of insolvency of underfunding on a private insurer that would handle the coverage, not the state, Kelley said.

Scott's move was strategically shrewd, said Austin Davis, government affairs manager for the Lake Champlain Regional Chamber of Commerce. A voluntary program kick-started by the enrollment of state workers could cost about the same as a mandatory program, he said.

That may make it harder for some Democrats to vote for a mandatory payroll tax when the governor has shown that a voluntary program can pencil out, Davis said.

"He's serving up the same dish," Davis said of the governor. "He's just not invoicing you — he's asking you if you want to write the check."

That raises the prospect — yet again — that the governor may veto one or both bills if they pass, as well as the question of whether two-thirds of legislators in each chamber, or 100 in the House and 20 in the Senate, would vote to override his veto.

Ashe views speculation about a veto override as premature and tiresome.

"I'm not interested in spending my entire life having the governor's potential veto be the factor in every single discussion the legislature has," Ashe said. "We are trying to express and have — sometimes with the governor, oftentimes without — affirmative visions for the state of Vermont, and that requires us to do what we believe is the right thing."

Johnson also declined to handicap a veto override. While the two sides are close, there are still some significant details to be worked out by the committees, and those details could easily sway how much support House members show for a compromise, Johnson said.

"It makes a difference whether paid family leave winds up at six weeks per kid or 12 weeks per kid, and whether we wind up at $12.35 or $12.75 [minimum wage]," Johnson said. "People care about those details."

Johnson stressed, however, that such differences are unlikely to derail a legislative deal. Then, if it turns out that Scott can't be convinced of the wisdom of the two benefits, he will have to explain his rationale, she said.

"If the governor still doesn't think that Vermont families and Vermont workers deserve them, then Vermonters should know that that's how he feels," Johnson said.

The House Committee on General, Housing and Military Affairs will take the first crack this session at both bills. Chair Tom Stevens (D-Waterbury) said he can support the Senate's version of the minimum wage increase as long as it leads to a $15-an-hour wage in a reasonable period.

He also said he has a "small amount of hope" that the opportunity to take leave for personal injury or illness — which benefits all workers, not just those of childbearing age or with aging parents — can be restored to the bill, but he's not holding his breath.

"I understand the politics of it enough to know that if we don't have the votes to pass a full mandatory bill at this time, there's real danger in trying to force it," Stevens said.

Regardless of how many votes any compromise might get, Stevens said he's "very confident" the legislature would not allow the governor's veto on either bill to stand.

"Even some people who voted no on the policy would understand the politics clearly enough and say, 'If the will of the people have spoken on a bill like this, it's unreasonable for the governor to veto it,'" Stevens said. "And they'll come back and vote for override."