Sanders Fends Off Attacks at New Hampshire Debate | Off Message 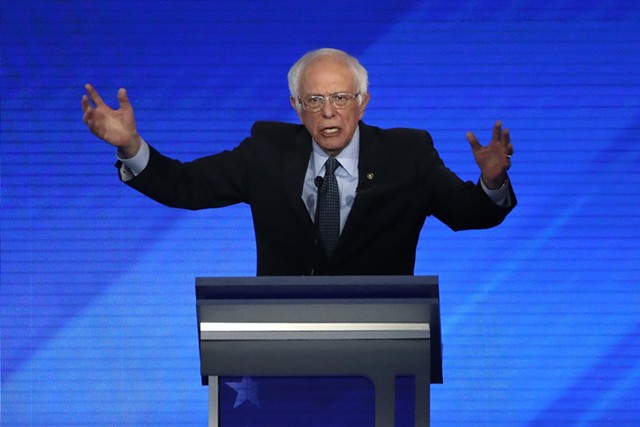 Following a strong performance this week in the Iowa caucuses, Sen. Bernie Sanders (I-Vt.) found himself under attack — from rivals and moderators alike — at a Democratic presidential debate Friday night in Manchester, N.H.

Moderator George Stephanopoulos of ABC News quickly goaded former vice president Joe Biden into repeating his recent criticisms of Sanders and former South Bend, Ind., mayor Pete Buttigieg, the other leader in Iowa. “Bernie’s labeled himself — not me — a democratic socialist. I think that’s the label [President Donald] Trump is going to lay on everyone running if Bernie’s the nominee,” the vice president said, adding that Buttigieg was merely the “mayor of a small city.”

Asked why Democrats should not fear such attacks from the president, Sanders said, “Because Donald Trump lies all the time.”

Stephanopoulos wasn’t about to let it go. “Let me just ask: Is anyone else on the stage concerned about having a democratic socialist at the top of the democratic ticket?” he asked.

Biden later attacked him for refusing to say how much his Medicare-for-all plan would cost. But in making his case that the proposal would break the bank, Biden inaccurately described a scuttled single-payer program in Sanders’ home state.

“When they did it in Vermont, what happened?” Biden asked. “They doubled the state income tax and then had a 14 percent withholding and they finally did away with it.”

In fact, Vermont never enacted single-payer, nor was any financing system ever formally proposed. The architect of the failed plan, former governor Peter Shumlin, pulled the plug on it in December 2014 after determining it would cost too much. Shumlin has endorsed and campaigned for Biden.

One of the lighter moments of the night came when moderator Linsey Davis attempted to reignite a lingering feud between Sanders and 2016 Democratic nominee Hillary Clinton. Davis asked Klobuchar to respond to Clinton’s recent allegation that “nobody likes” Sanders and that he doesn’t get anything done.

Biden walked over to Sanders’ podium and gave him a half-hug. “I like Bernie just fine,” Klobuchar deadpanned.

“I think, quite honestly, as we face one of the great political crises facing America, our job is to look forward, and not back, to 2016,” Sanders said. “And I hope that Secretary Clinton and all of us can come together and move in that direction.”

Sanders also came under fire for his evolution on gun rights. Asked about his previous opposition to several gun control measures, Sanders again made the dubious claim that his loss in a 1988 congressional race was due to his support for an assault weapons ban. But for perhaps the first time, Sanders conceded that he has changed his mind on gun control.

That wasn’t good enough for Biden, who continued to criticize Sanders for voting against the Brady Bill and for supporting a 2005 law that shielded gun manufacturers from lawsuits. “Think of all the thousands and thousands of people who died,” Biden said. “We have to be held accountable for the things we did.”