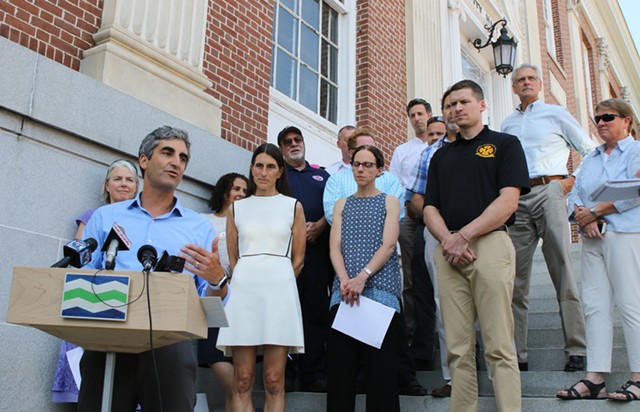 The City of Burlington will pay less interest on borrowed money, thanks to a significant credit rating upgrade announced on Monday.

Moody’s increased the city’s rating to Aa3, a two-step upgrade from its most recent A2 status, Mayor Miro Weinberger said at a press conference on the City Hall steps. That's six steps higher than the Baa3 rating in 2012 that put it on the verge of junk bond status.

In 2011, Citibank sued the city for $33.5 million to cover the cost of equipment it leased to the ailing telecom. The city settled the suit for $10.5 million during Weinberger's first term as mayor.

This week's upgrade marks the first time the city has held a “Double A” credit rating in a decade, the mayor said. The milestone was a personal goal, he said, recalling his pledge as a mayoral candidate eight years ago to restore the city’s financial health.

“After years of hard work, focus and persistence, we have fully delivered on that promise,” Weinberger said.

The mayor touted other accomplishments as he stood at a podium in front of a cadre of smiling city officials. He said his team has resolved the 27 deficiencies noted in the 2012 financial audit.

The upgrade will have tangible effects: For one, taxpayers will save $5.1 million in interest payments on the $70 million Burlington High School and tech center renovation, School Board chair Clare Wool said. The city and school share a bond rating, the mayor said.

“Our goal is to attract families to this thriving city, and we do so with fiscal management and well operating schools,” Wool said. “This is an anomaly in the state of Vermont to be able to secure this funding.”

“Burlington has strong social and environmental values but without fiscal stability, we do not have the money to invest in those values,” Shannon said. “An improved credit rating lowers the cost of borrowing money … and allows us to do more with every tax dollar we spend.”

Weinberger said the city will save nearly $1 million on the $13 million in bonds it will seek this fall.

“This signals to business owners and homeowners that we are a stable, well managed city,” the mayor said. “We are a place that is worth investing in.”
Prev
Next