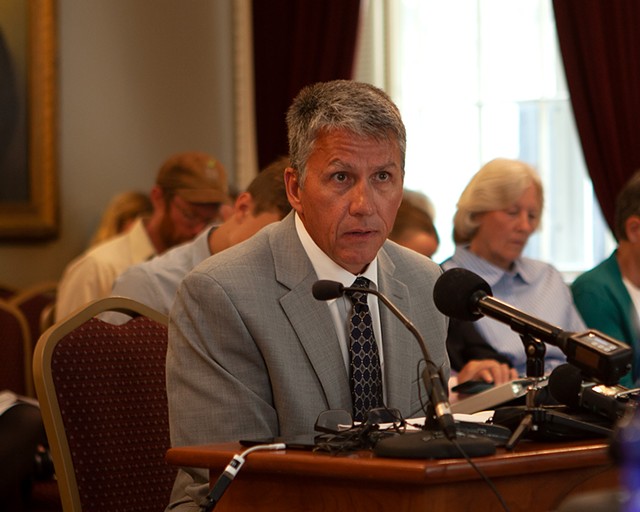 The proposed merger of Vermont’s last independent creamery with the nation’s largest dairy co-op provoked some pointed questions Monday from senators concerned about consolidation in the state's signature agricultural sector.

The 325 members of the St. Albans Cooperative Creamery will vote later this month on whether to become part of the 14,000-member Dairy Farmers of America co-op.

The move, which has been in the works for two years, was billed Monday by proponents as the best way for Vermont dairies to secure a stable market for their products and make needed investments in the creamery and its fleet of delivery trucks.

Harold Howrigan, president of the St. Albans Co-op board, said he's a sixth-generation dairy farmer from Fairfield who wants to see his operation thrive well into the future.

“The proposed merger of St. Albans and Dairy Farmers of America is one that will not only benefit the members of both cooperatives, but will strengthen the Vermont dairy landscape overall,” Howrigan said.

Brad Keating, DFA’s chief operating officer for the Northeast region, said the nationwide co-op stood prepared to invest $30 million in the St. Albans creamery and another $5 million in its transportation fleet. DFA has had a marketing partnership with the creamery since 2003, he said.

But members of the Vermont Senate Committee on Agriculture expressed concern that the deal provides no guarantees that milk prices, which have been depressed for years, would rise, nor does it provide protections against future closure of the facility.

Selling the Herd: A Milk Price Crisis Is Devastating Vermont's Dairy Farms
By Paul Heintz
Agriculture
Sen. Ruth Hardy (D-Addison) asked whether the merger would create a single co-op that was “too big to fail.”

“Is there a concern that more than half of our dairy farms would be shipping to one producer?” Hardy asked Diane Bothfeld, director of administrative services for the Vermont Agency of Agriculture, Food & Markets.

Bothfeld said the number of dairies in the state dropped 27 percent in eight years, from 996 in 2011 to 725 in 2018. While it is “important for farmers to have options,” she said the proposed merger also promised significant opportunities for struggling producers.

“It is a consolidation of farmers’ choices of where to sell their milk,” Bothfeld said. “But a market is important. What is the option without this merger?”

That market is one that has suffered from an oversupply of milk at the same time that a slew of new beverage options have gained popularity, including alternatives such as almond, soy and oat milk.

“Until we get that supply under control, we’re not going to get higher milk prices,” said Sen. Bobby Starr (D-Essex/Orleans), the committee chair. 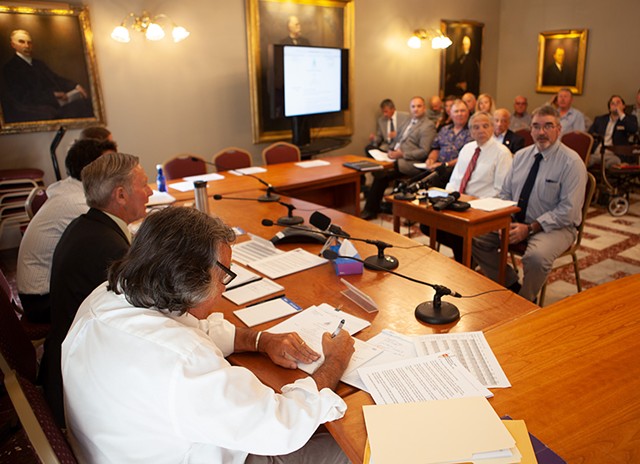 It was one of several pointed questions Pollina asked during the hearing. He wondered why farmers won’t know the full value of the deal until after it’s signed. He also surmised that St. Albans CEO Leon Berthiaume wasn’t pulling down anything close to the $700,000 salary paid to DFA CEO Rick Smith.

And on several occasions, Pollina detailed lawsuits filed against DFA by its members over low milk prices. He suggested that St. Albans farmers “might want to think twice” about merging with such an organization.

Who Wants to Work on a Vermont Dairy Farm? A Reporter Spent a Week Finding Out
By Chelsea Edgar
Agriculture
Pete Hardin, the Wisconsin-based publisher of the dairy industry newsletter The Milkweed, went so far as to label some items on DFA's balance sheet as “suspicious.” He called for the Vermont Attorney General to perform a “forensic audit” of DFA’s books “so that at the very least, the members of St. Albans have some understanding of the black hole they are getting into.”

Supporters of the merger pushed back on the notion that they didn’t understand their future partner. The national organization has “handed us every piece of information we have ever requested,” said Alburgh farmer and St. Albans Co-op board member Tom Bellavance.

“We’re not going into this blind,” he said. “We’ve really researched what we are getting into.”

Hardy said she hoped that was the case, and that the merger leads to fewer farmers going under, as well as high milk prices.

“I know you’re trying to do the best you can for your businesses and your farmers, and I appreciate that,” she said. “I just clearly have concerns about Vermont farms and Vermont products.”
Prev
Next