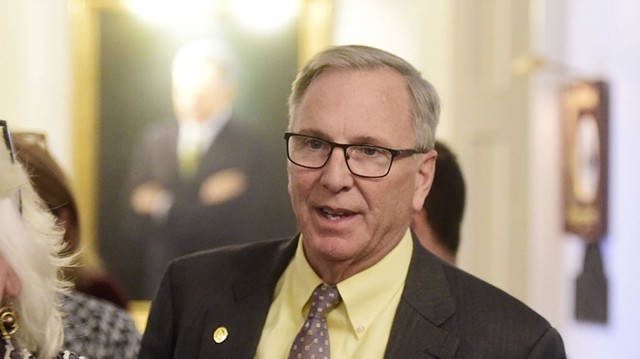 Anderson said he informed Gov. Phil Scott of his decision in late June and will step down effective July 31, citing “personal and family reasons.”

“This has been a very difficult decision,” Anderson wrote. “Leading the fine men and women of the Department of Public Safety for the past 30 months has been the highlight of my career.”

Scott tapped the former U.S. attorney for Vermont in January 2017 to run the Department of Public Safety, which includes the Vermont State Police, as well as divisions for fire safety, crime data and emergency response. At the time Anderson was a deputy general counsel for the U.S. Department of Justice.

Anderson quickly developed a reputation as a hardliner on drug issues.

"Whether you're the kingpin or the low-level street dealer, we are coming after you," Anderson said in April as he and U.S. Attorney Christina Nolan announced a crackdown in Brattleboro that resulted in 16 arrests.

His war-on-drugs stance rankled some. Former Democratic gubernatorial candidate Brenda Siegel called on Scott to remove Anderson from his cabinet post after his Brattleboro appearance.

"Anderson made extremely dangerous comments to a community suffering with substance-abuse disorder," she said. "It's a disease. Even the governor says we can't arrest our way out of it."

Anderson also insisted that roadside saliva testing be a part of any effort to create a tax-and-regulate system for recreational cannabis sales in the state. That position, endorsed by Scott, gummed up the efforts to get such a law passed this year.

In a news release put out minutes after Anderson informed staff of his departure, he expressed respect for staff and his appreciation for their support. “I am proud to call these men and women my colleagues and friends,” he said.

Anderson and his wife have been living separately since he accepted the post in January 2017, and he has decided to join her in Washington, D.C. Anderson said he is hoping to teach and to continue with public service in the future.

“Tom has been an extremely valuable member of my team,” Scott said in the release. He added, “His service and leadership are greatly appreciated.”
Prev
Next