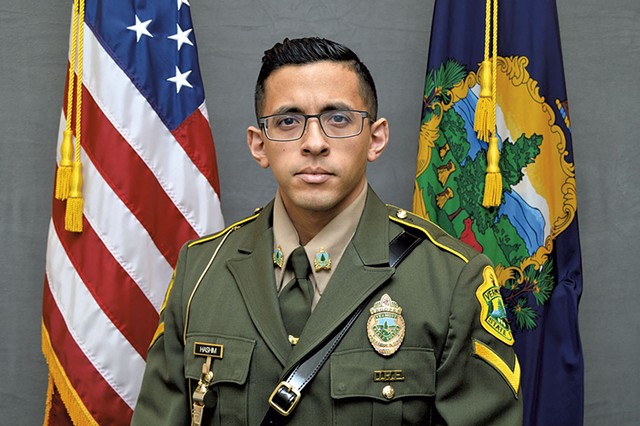 Rookie Rep. Nader Hashim (D-Dummerston), who this year became the first active-duty Vermont State Police trooper to serve in the legislature, has now become the first sitting legislator to resign from the state police force.

Hashim handed in his resignation on Monday, citing a need to stay in his legislative district. He told Seven Days that he's accepted a job as a clerk at Costello, Valente & Gentry, a Brattleboro law firm.

“I’ll be doing the law office study program and in four years, as long as I pass the bar exam, I’ll be an attorney,” he said in an interview Wednesday evening.

Announcing the change on Facebook, the 30-year-old lawmaker said it was the most difficult decision of his life, but he had to resign from the force in order to fulfill his role as a lawmaker.

“I have to admit, as I'm typing this message out to you all, my eyes are a bit watery,” he wrote on Facebook.

In his resignation letter, Hashim told Vermont State Police Col. Matthew Birmingham that his duty assignment in Royalton wasn’t compatible with his role as a representative.

“Due to my role as a legislator, I must remain within the Windham-4 district so I can more adequately serve my constituents,” he wrote.

Super Trooper: Time on 'the Road' Shapes Rep. Nader Hashim's Views
By Taylor Dobbs
Politics
Hashim has been on legislative leave from the state police since the beginning of the year, but he said in his resignation letter that his last official day as a trooper will be May 24.

In a phone interview, Hashim said the problem wasn’t necessarily where he spends his time on duty. He said the troopers’ union contract requires the officers to live near the barracks where they work.

For Hashim, that presented a catch-22: In order to avoid any conflicts of interest with his legislative work, he was transferred out of the Westminster state police barracks as soon as he won the election. That way, he wouldn't be dealing with any constituents in his role as a cop.

But that meant he was working out of the Royalton barracks — and not living in one of the surrounding towns. Hashim said he asked the state police for a waiver to the requirement that he live near the barracks. Hashim said he knew of waivers being given to troopers facing disciplinary action or who received a promotion.

When his application was denied, Hashim said, he was told that waivers are only given out “‘when it serves the interests of the department.”

“That was the quote that was given to me,” he said. “So apparently, this doesn’t serve the interests of the department.”

Forced to choose between jobs, Hashim decided to turn in his badge. He said he didn’t get a warm send-off from the state police.

“They said, ‘Fill out this SurveyMonkey link as an exit interview, and if you want to talk in person, let me know,’” Hashim said. “It just kind of felt like a slap in the face … you’d think they’d want to talk to somebody who’s been in the department for seven years about how they could improve."

State police spokesperson Adam Silverman said by email Wednesday evening that the agency doesn't have a comment about Hashim's resignation.

Hashim, for his part, said he has mixed emotions about leaving the force.

“There are things about this job that I’m not going to miss, like the dangerous parts, but I can already feel it now that I’m really going to miss the troopers that I work with,” he said.

In a profile of Hashim that ran last month in Seven Days, he said he identifies with a new generation of cops who are more interested in transparency and community than in being part of the proverbial "blue wall of silence."

Though he's giving up the distinction of being the only legislator-cop, Hashim said he hasn't lost the perspective policing gave him. This session, he relied on his background to help guide his work on the House Judiciary Committee.

“The experiences I’ve had as a trooper, they’re not going to go away,” he said, “and I believe they’ll always inform my decision-making as I move forward in the legislature.”
Prev
Next