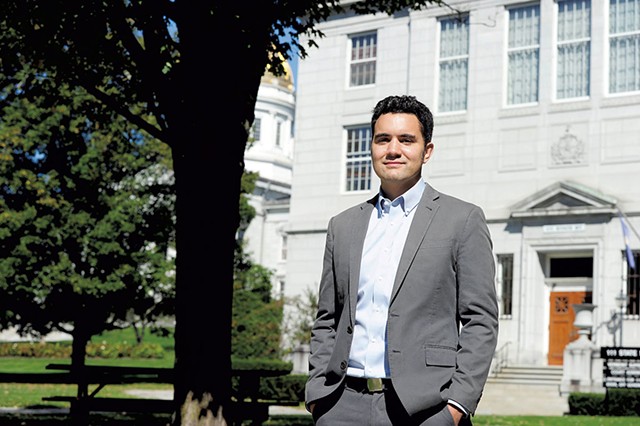 The City of Burlington will pay $13,500 to a Queen City man and his attorneys who challenged the city’s no-trespass ordinance last summer after he was barred from City Hall Park.

The June 26 settlement with Jason Ploof also says the city will rewrite its trespass ordinance by year’s end, according to the American Civil Liberties Union of Vermont, which represented Ploof along with attorney Justin Barnard of Dinse in Burlington.

“Our parks, especially central parks like City Hall Park, are something that belongs to everybody,” ACLU of Vermont staff attorney Jay Diaz told Seven Days. “We’re glad that the city going forward is going to take that more seriously than they have in the past, applying due process of law whenever they attempt to revoke people’s rights.”

In 2015, Burlington police ticketed and trespassed Ploof twice for having an open container in the park, the second time for 90 days. Police then arrested Ploof when they saw him conversing with friends near the fountain during that period, according to court documents.

With the ACLU of Vermont’s backing, Ploof contended that the banishment “unlawfully restricted [his] freedom to receive information and enter a traditional public forum, in violation of the First Amendment.” The suit survived the city’s attempts to dismiss it.

In a press release Tuesday, Ploof said he grew up visiting City Hall Park and that being banned “meant the loss of a core part of my identity and made me feel like an outcast in my hometown.

“I’m relieved I can continue to be a part of my community in this way,” he continued.

The two-page settlement also dictates provisions of the new ordinance. It says police must first issue a verbal warning and allow the subject to address the offending conduct before they’re ticketed. No-trespass orders must also spell out a procedure to challenge the ticket, according to the agreement.

ACLU Sues to Protect Homeless Encampments in Burlington
By Katie Jickling
Off Message
The current ordinance includes no such language. As written, a first offense is punishable by up to a $500 fine, and the violator can be kicked out of the park for the rest of the day with no opportunity to dispute the enforcement.

The city must submit a draft of the ordinance to the Burlington City Council Ordinance Committee by September 1, according to the settlement.

This isn’t the first time Burlington’s trespass practices have been challenged in court. In 2014, two Burlington attorneys argued in a lawsuit that banning people from the Church Street Marketplace, a public space, is unconstitutional. But a judge tossed the suit, saying the plaintiffs had no legal standing to argue the case because neither had been personally trespassed from there.

Church Street No-Trespass Ordinance Survives Legal Challenge
By Mark Davis
Off Message
Ploof’s case is the third filed by the ACLU of Vermont in just over three years relating to Burlington’s treatment of low-income residents. In early 2018, the city paid $30,000 to settle a wrongful eviction lawsuit filed by Joseph Montagno, who was kicked out of his Church Street apartment for frequently calling police.

And the ACLU is still litigating a suit on behalf of Brian Croteau, a homeless man who claims the city evicted him from his encampment and tossed all of his belongings. That case is in discovery, Diaz said.

City of Burlington Pays $30,000 to Settle Wrongful Eviction Lawsuit
By Katie Jickling
Off Message
Speaking generally, Diaz said bans don’t address such conflicts and social issues. He said the most recent settlement shows the city is taking a more “humane and productive approach to supporting its most low-income residents.”

“We think the city is interested in working with us,” he said. “We look forward to collaborating to ensure constitutional rights are upheld in the city of Burlington for everyone.”

Burlington City Attorney Eileen Blackwood said she's "happy that the settlement was able to come together.

"We've been looking to update our trespass ordinance for some time but were held up because of the lawsuit," she said. "Now that the lawsuit is resolved, we're able to move forward with that, and we're looking forward to having meetings with the ordinance committee and looking at some positive changes to keep our ordinances in line with what's happening around the country with these kinds of trespass ordinances."
Prev
Next