'Did You Just Swear At Me?' Bodycam Captured Violent Encounter With Burlington Cop | Off Message

'Did You Just Swear At Me?' Bodycam Captured Violent Encounter With Burlington Cop 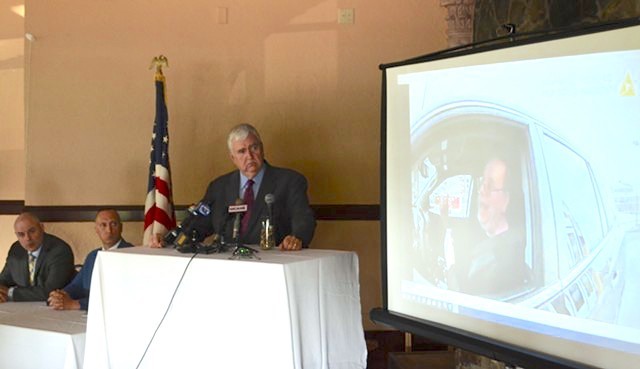 He stayed calm as Douglas Kilburn, a 54-year-old stroke victim, aired his frustrations with University of Vermont Medical Center security guards who wouldn't let him visit his wife in the emergency room. Campbell's bodycam footage of their March 11 encounter shows that the Burlington cop offered a solution: He'd escort Kilburn through the hospital.

The plan worked, and when Kilburn got to his wife's bedside, he extended his hand to shake Campbell's.

Campbell 's demeanor was much different when he encountered Kilburn again seven minutes later. Kilburn was inside his Buick SUV in the hospital's ambulance bay, arguing again with a security guard.

Campbell yelled, "Shut the fuck up and leave! Go! They don't want you here!"
Kilburn had been inching his car away from the hospital entrance. But he stopped and opened the door, triggering a violent altercation with the officer that left Kilburn with a broken jaw and fractured orbit bone.

He died three days later. Chief state medical examiner Steven Shapiro classified his death as a homicide and noted blunt force trauma as one of several factors that killed him, along with obesity, hypertension and diabetes. City leaders have questioned the veracity of the homicide finding.

Bodycam video released Wednesday seemed to confirm Campbell's claim in previously reported arrest records that Kilburn took a swing as the officer tried to physically control him. It also showed how quickly the situation escalated once Campbell lost patience.

At a press conference Wednesday, representatives from the Burlington Police Officers' Association said the video showed Campbell punched Kilburn solely to protect himself.

"This is a simple case of self-defense," attorney Rich Cassidy said after offering a running commentary on the 35-minute video. "It's obvious that Mr. Campbell should not be charged with any crime."

But Kilburn's uncle, Albert Kilburn, told Seven Days the video shows that Campbell should be removed from law enforcement ranks.

"It is clear to me that Officer Campbell’s aggression and his foul vulgar mouth are what provoked this incident," he wrote in an email. "Douglas’ behavior is pretty much that of the nephew I knew. Loud, annoying at times, and outspoken, and ready to stand-up for himself when the need to do so arises. Officer Campbell’s unwarranted vulgar provocation was a stand-up time that ultimately cost Douglas his very life."

The police union obtained a court order last Friday compelling the city to release the footage. City officials had been withholding the video at the request of state police, even as they said it would ease outcry over their alleged meddling in the outside investigation.

The city provided the video to the union before responding to media requests, which the union seized as an opportunity to explain the footage through its lens. Dave Clements, a former union president and Burlington Police Department use-of-force instructor, told reporters the punches thrown by Campbell were "absolutely" in accordance with police training.

Campbell's curse-colored directive was not, he said, but represented the "escalation of a verbal command" in a stressful situation.

"If somebody is going to fault an officer for what he says when he's in a situation where he's facing risk of personal injury and harm to himself and risk of injury to others, I guess you can do that," Cassidy added. "But we hope [the video] would help advance the cause of public understanding about how difficult the job is that officers are called upon to do."
Cassidy said Campbell was escorting another person to his police car when the second interaction took place. Campbell was in a hurry to get that man to a homeless shelter before it closed at 6 p.m., Cassidy said. Kilburn had pulled into the ambulance bay and was arguing from the driver's seat as the engine idled.

As he walked by, Campbell stopped and asked the security guard if the guard was going to "trespass him" — in order words, kick Kilburn off the property. The guard said, "I don't know, I don't know what I'm supposed to—" before Campbell replied, "Well, make up your mind."

"You don't need to trespass me. I'm leaving," Kilburn interjected, allowing the car to roll forward a few feet.

Then Kilburn pointed out the window toward the hospital entrance. "Christ, I've known that guy for 30 years!" he said, though it's unclear to whom Kilburn was pointing.

That's when Campbell told him to "Shut the fuck up and leave!" prompting Kilburn to direct his ire toward the officer.

"Did you just swear at me? You're a fucking punk!" Kilburn said.

He said something partially inaudible that ended with "before I come over."

Campbell, who had been moving away from Kilburn's car, turned around and walked back toward the driver's window. Kilburn opened the door and swung his feet out as he yelled, "He ain't got a right to swear at me!" Campbell put his hand on the car door, then on Kilburn's left shoulder.

"You ain't got a right to swear at me, motherfucker," Kilburn said, swinging an arm toward Campbell. Campbell grabbed Kilburn's arm, then appeared to deliver three or four hits to Kilburn's face, though his hands were not visible in the video. Kilburn fell to the ground within seconds.

Kilburn moaned as Campbell and the guards handcuffed him. It's hard to hear what Kilburn said next, with his face against the pavement, but the officer's response was clear.

"I don't give a fuck," Campbell said. "You just punched me in the face."

State police finished an outside review of Kilburn's death last month, but Attorney General T.J. Donovan has not yet announced whether he plans to bring criminal charges against Campbell.

Kilburn's sister, Lisa Webber, did not return a call for comment Wednesday. She previously told Seven Days in April that she had accompanied Kilburn for the first part of his trip to the hospital, before police arrived. She said Kilburn was upset at the time about money he believed a relative owed him. He encountered the relative at the hospital, Webber said, and the two caught security guards' attention as they argued loudly.

In the video of his initial encounter with Campbell, Kilburn appeared to reference the owed money as "what this is all over, four grand."

Webber also provided details about Kilburn's physical health, including a recent stroke that had left him with limited use of his left side and trouble controlling his emotions.

"There was no filter with Doug anymore," Webber told Seven Days. "He was either upset and loud, or he was very, very calm. It was like a switch."
Prev
Next