Officer Said Kilburn Punched Him During Confrontation | Off Message 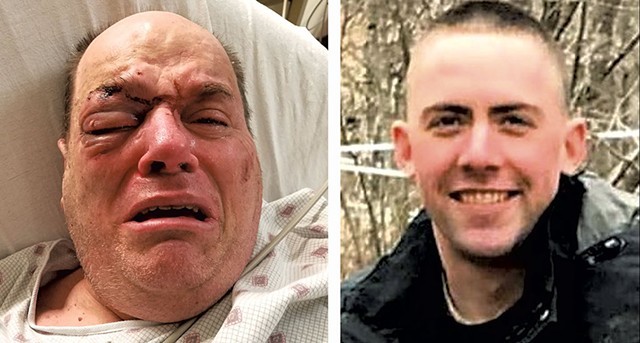 Cory Campbell hasn't spoken to state investigators about his violent confrontation with 54-year-old Douglas Kilburn, who later died. But the Burlington cop gave his version of events in a report he wrote shortly after the March 11 encounter in the University of Vermont Medical Center ambulance bay.

Previously unreported court records show that, by his own account, Campbell initiated physical contact with Kilburn by grabbing the disabled man's arm as he stepped out of his SUV, in an attempt to handcuff him.

Kilburn then punched the officer using his free arm, hitting him in the jaw — a blow Campbell rated as three out of 10 on a pain scale. Campbell reported landing three punches in return, all to Kilburn's right eye, sending him to the ground.

"I placed Kilburn into handcuffs and observed Kilburn to be bleeding heavily from his right eye," Campbell wrote.

Kilburn suffered fractures to his jaw, orbital bone and skull, as Seven Days has reported. He died three days later, though city officials disputed a state autopsy that linked his death to Campbell's punches and asked the governor's office to delay its release.

State police have refused to make public the records related to the incident as they continue to investigate, and Burlington Police Chief Brandon del Pozo has offered only select details from the evidence he's seen, including video from Campbell's body camera and a hospital surveillance system.

The latest turn in the contentious investigation came last week, when the Burlington Police Officers' Association asked a judge to order the release of Campbell's bodycam video. Campbell's attorney said he wanted his client to view the footage alongside a use-of-force expert before sitting for an interview with state police.

Campbell's written account was included in charging documents filed against Kilburn for assaulting a police officer and disorderly conduct. His account mirrors some details that del Pozo previously provided.

Campbell wrote that he was called to the hospital to assist with an irate man who was trying to visit his wife, a patient. Kilburn referred to UVM security staff as "cockroaches," Campbell said, and hospital security staff asked his help in calming Kilburn down. Campbell escorted Kilburn to his wife's room, then left to respond to another call at the hospital.

While escorting another person outside, Campbell said, he saw hospital security run past him to confront Kilburn, who was sitting in his car in the ambulance bay. Kilburn and the security guards began arguing loudly.

Campbell asked security if they wanted Kilburn "trespassed" — in other words, removed from the property. "They advised they were not sure," Campbell wrote.

The officer twice yelled at Kilburn to leave, the second time saying something to the effect of "just fucking leave and get out [of] here."

"Kilburn turned to me and stated to the effect of 'you can't swear and [sic] me you fucking punk!'" Campbell wrote. "Kilburn then glared at me and unlocked his car door and started to step out."

Campbell said he walked over to Kilburn's car door and "grabbed his left arm in an attempt to handcuff him."

An affidavit submitted by fellow officer William Drinkwine noted that one of the UVM security guards witnessed Kilburn hitting Campbell in the chest and face.

Drinkwine also described the unreleased hospital surveillance video, which he said shows Kilburn exiting his car and walking toward Campbell "in an immediate rapid manner."

The confrontation itself is obscured by Kilburn's SUV, Drinkwine wrote.

Kilburn was in poor physical health, having suffered a stroke that left him with limited use of his left side and caused him to speak loudly, his sister previously told Seven Days.
Prev
Next