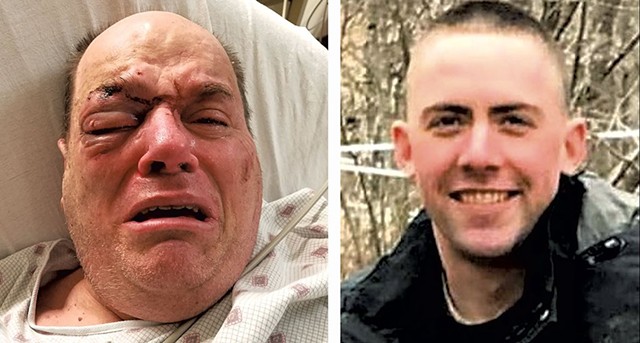 Burlington officials must disclose bodycam video showing the March altercation outside the University of Vermont Medical Center between a city cop and Douglas Kilburn, who died three days later, a judge ruled Monday.

Judge Helen Toor decided that the video relates to an arrest and cannot be withheld even if investigators believe it might interfere with their work.

The decision is a win for the Burlington Police Officers' Association, which sued on behalf of Officer Cory Campbell. Unless the city appeals to the Vermont Supreme Court, the footage will soon become public and may shed new light on the controversial case.

"It will be good for everyone involved to see this, from Officer Campbell to the community at large," union president Dan Gilligan said.

In April, the state's chief medical examiner, Steven Shapiro, classified Kilburn's death as a homicide. Shapiro was unable to identify the immediate cause of death but attributed it to several underlying factors, including hypertension, obesity, diabetes, vascular disease and skull fractures due to blunt-force trauma.

Burlington Police Chief Brandon del Pozo and Mayor Miro Weinberger privately disputed the medical finding and went so far as to ask the governor's office to stop its release.

City leaders believed video from the confrontation would help quell the political backlash. But the police department had earlier turned the case over to Vermont State Police, whose policy bars disclosure of bodycam video during active investigations because it could taint witness testimony. So the city withheld the video from the public and Campbell at the state's request.

Campbell, meanwhile, refused to talk to state investigators unless he could first view the bodycam video, hospital surveillance footage and incident reports.

The union sued the city in April on his behalf, arguing that bodycam video associated with an arrest is a public record under state law regardless of any pending investigation.

Toor mostly agreed, with the exception of the hospital surveillance tape. Because the surveillance footage was retrieved solely for the death investigation, it could "at least potentially" be exempt from disclosure. She asked the city to explain how release of that video might interfere with what state law calls "enforcement proceedings."

It may soon be a moot point. The state police already handed its report to Attorney General T.J. Donovan, who has yet to make a charging decision in the case.

"We think it's good for union members to have this kind of video be readily available, because our people do a good job of doing very difficult work," he said.
Prev
Next