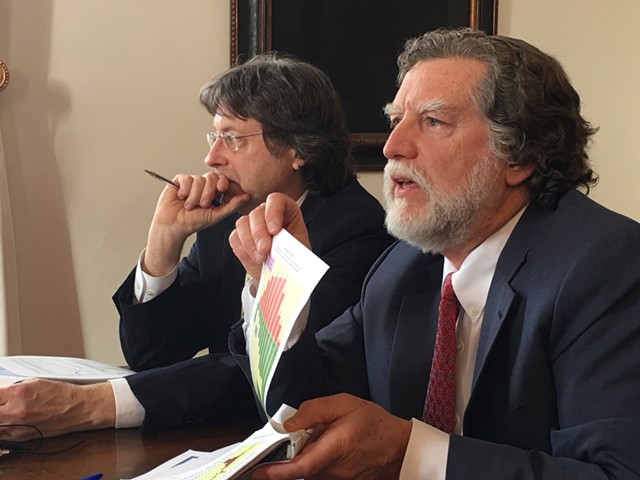 Vermont's top economic analysts are painting a modestly rosy picture of the state's economic and revenue outlook — but they caution that everything is subject to change.

"We're standing on much softer ground than usual," said Tom Kavet, the legislature's economist, at a Thursday meeting of the state's Emergency Board. He made his presentation along with Scott administration economist Jeffrey Carr.

The Emergency Board includes the governor plus the chairs of the legislature's four money committees — House Appropriations and Ways & Means, and Senate Appropriations and Finance. The E-Board meets twice yearly to review and adopt state revenue forecasts. This year, board members expect to have at least one extra session due to the extreme volatility of the state's finances.

The primary cause of the uncertainty: the federal Tax Cuts and Jobs Act, which President Donald Trump signed into law in late December. It took effect this month.

Kavet said that if the federal bill hadn't become law, the state's fiscal picture would have been very predictable, with little change from last July's forecast. But he said the "extreme uncertainty of the impact of the federal tax cut" threw a wrench into the works. And Carr added that the situation is "even more volatile going forward."

The primary unknowns: how the new tax law will affect the behavior of individuals and corporations, and how the Internal Revenue Service will interpret it. Kavet and Carr's written presentation referred to the law as a "full employment act for tax advisers." They also noted, "Although touted as 'simplifying' the tax code, for many filers, the 1,097-page bill introduces numbing complexity."

"It's gonna be a couple of years before this settles down." Carr told the board, and warned that there would be shocks and surprises in state revenue along the way.

That said, the pair projected that 2018 will bring gains in the state's economy and tax collections. This is partly because federal tax cuts are likely to raise some Vermonters' state tax bills. Also, Carr and Kavet said, there's likely to be short-term economic growth thanks to the tax cuts — although they warned that the longer-term effect will be negative, owing to higher federal budget deficits.

On taxes, Carr and Kavet say that in the rest of this fiscal year, which expires at the end of June, state income tax collections will be $9 million more than previous estimates — and almost $30 million higher in the next fiscal year. But they warned, again and again, that the figures were much more subject to change than usual.

Members of the board heeded the warnings, and all preached caution about counting those chickens before they hatch. "We have to hold our course," said Rep. Kitty Toll (D-Danville), chair of the House Appropriations Committee. "It's not time to take these revenues as a solid foundation. We have to move forward with caution."

While Carr and Kavet provided projections of state tax revenue, they could offer no guesses on how Vermonters' total tax bills — federal and state combined — could turn out. And that's what members of the board are most interested in, as they ponder changes in state tax policy to compensate for the impacts of the federal law.

During the meeting, Gov. Phil Scott expressed a desire to "hold Vermonters harmless" on taxes. But at a press conference Thursday afternoon, he said, "It may be difficult ... to determine what is really happening. If there's anything that's clear and conclusive, we'll act on it."

Sen. Ann Cummings (D-Washington), chair of the tax-writing Senate Finance Committee, downplayed the prospects of significant tax reform this year. "You don't take any major actions until you feel confident that you know what's going on," she said. "I think if you're going to see any major overhaul in taxes, it'll be next year."